Types of hybridisation and geometry of molecules

Bonding in simple molecules such as hydrogen and fluorine can easily be explained on the basis of overlap of the respective atomic orbitals of the combining atoms.

In order to explain these observed facts, Linus Pauling proposed that the valence atomic orbitals in the molecules are different from those in isolated atom and he introduced the concept of hybridisation. Hybridisation is the process of mixing of atomic orbitals of the same atom with comparable energy to form equal number of new equivalent orbitals with same energy. The resultant orbitals are called hybridised orbitals and they posses maximum symmetry and definite orientation in space so as to minimize the force of repulsion between their electrons .

Types of hybridisation and geometry of molecules

Let us consider the bond formation in beryllium chloride. The valence shell electronic configuration of beryllium in the ground state is shown in the figure. 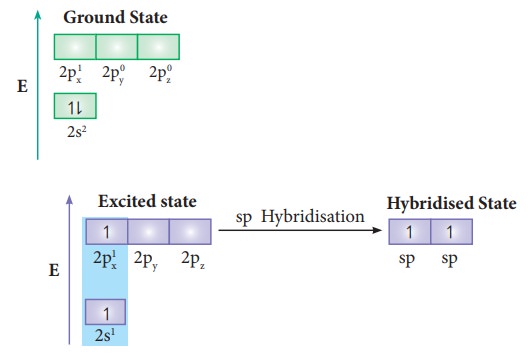 In BeCl2 both the Be-Cl bonds are equivalent and it was observed that the molecule is linear. VB theory explain this observed behaviour by sp hybridisation. One of the paired electrons in the 2s orbital gets excited to 2p orbital and the electronic configuration at the excited state is shown.

Overlap with orbital of chlorine

Each of the sp hybridized orbitals linearly overlap with pz orbital of the chlorine to form a covalent bond between Be and Cl as shown in the Figure. 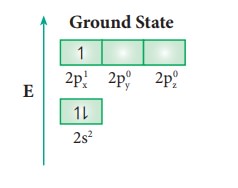 In boron, the s orbital and two p orbitals (px and py) in the valence shell hybridses, to generate three equivalent sp2 orbitals as shown in the Figure. These three orbitals lie in the same xy plane and the angle between any two orbitals is equal to 120º

Overlap with 2pz orbitals of fluorine:

The three sp2 hybridised orbitals of boron now overlap with the 2pz orbitals of fluorine (3 atoms). This overlap takes place along the axis as shown below. 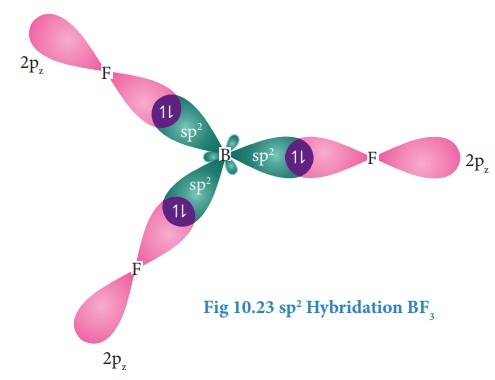 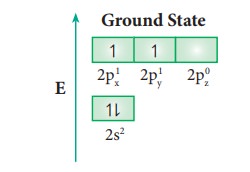 Overlap with 1s orbitals of hydrogen:

The 1s orbitals of the four hydrogen atoms overlap linearly with the four sp3 hybridised orbitals of carbon to form four C-H σ-bonds in the methane molecule, as shown below. 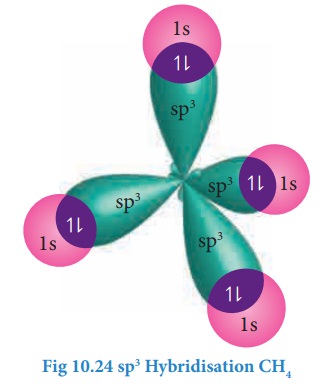 In the molecules such as PCl5, the  central  atom  phosphorus  is  covalently bound to five chlorine atoms. Here the atomic orbitals of phosphorous undergoes sp3d hybridisation which involves its one 3s orbital, three 3p orbitals and one vacant 3d orbital (dz2). The ground state electronic configuration of phosphorous is [Ne]3s2 3p1x3py13pz1 as shown below. 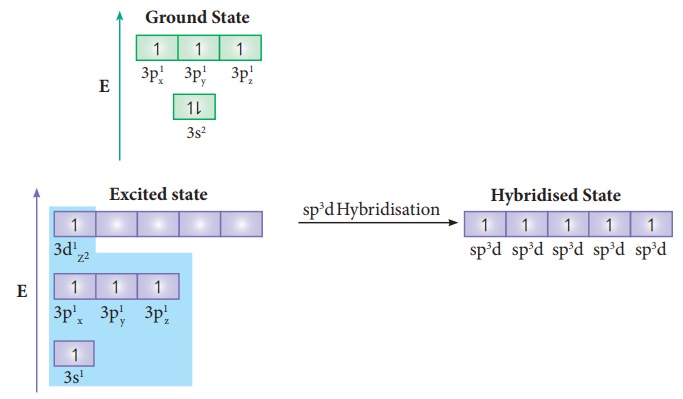 Overlap with 3pz orbitals of chlorine:

The 3pz orbitals of the five chlorine atoms linearly overlap along the axis with the five sp3d hybridised orbitals of phosphorous to form the five P-Cl σ-bonds, as shown below. 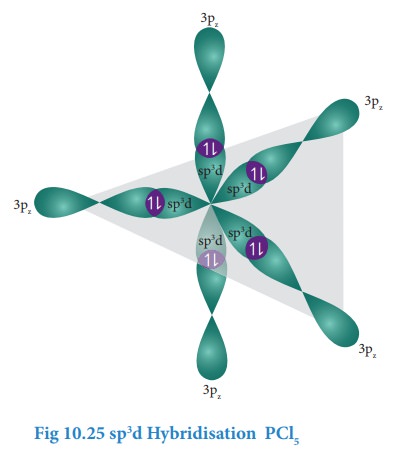 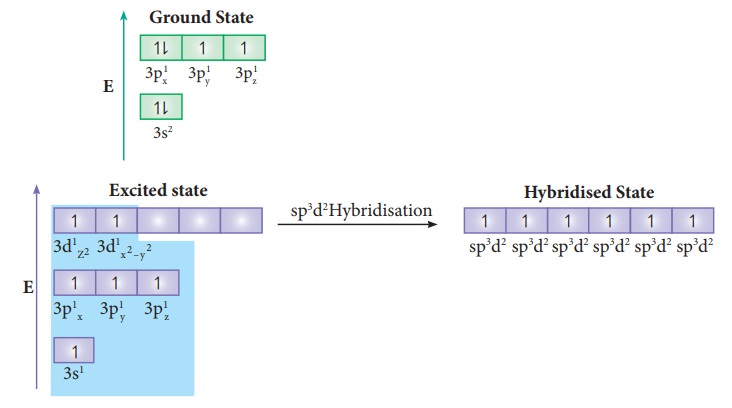 One electron each from 3s orbital and 3p orbital of sulphur is promoted to its two vacant 3d orbitals (dz2 and dx2-y2) in the excite state. A total of six valence orbitals from sulphur (one 3s orbital, three 3p orbitals and two 3d orbitals) mixes to give six equivalent sp3d2 hybridised orbitals. The orbital geometry is       octahedral as shown in the figure.

Overlap with 2pz orbitals of fluorine: 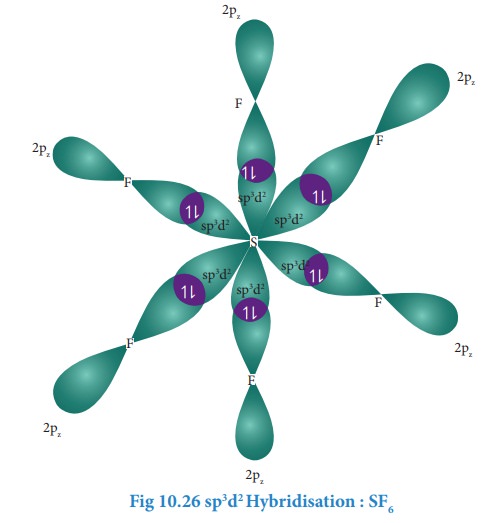 The bonding in ethylene can be explained using hybridisation concept. The molecular formula of ethylene is C2H4. The valency of carbon is 4. The electronic configuration of valence shell of carbon in ground state is [He]2s2 2px1 2py1 2pz0. To satisfy the valency of carbon promote an electron from 2s orbital to 2pz orbital in the excited state. 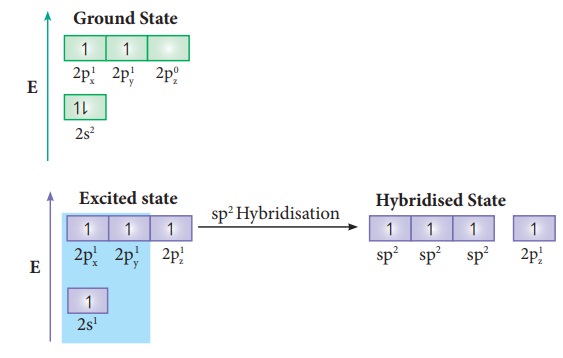 In ethylene both the carbon atoms undergoes sp2 hybridisation involving 2s, 2px and 2py orbitals, resulting in three equivalent sp2 hybridised orbitals lying in the xy plane at an angle of 120⁰ to each other. The unhybridised 2pz orbital lies perpendicular to the xy plane.

The unhybridised 2pz orbital of both carbon atoms can overlap only sideways as they are not in the molecular axis. This lateral overlap results in the formation a pi bond between the two carbon atoms as shown in the figure.

Similar to ethylene, the bonding in acetylene can also be explained using hybridization concept. The molecular formula of acetylene is C2H2. The electronic configuration of valence shell of carbon in ground state is [He]2s2 2p1x 2p1y 2p0z. To satisfy the valency of carbon promote an electron from 2s orbital  to 2pz orbital in the excited state.

In acetylene molecule, both the carbon atoms are in sp hybridised state. The 2s and 2px orbitals, resulting in two equivalent sp hybridised orbitals lying in a straight line along the molecular axis (x-axis). The unhybridised 2py and 2pz orbitals lie perpendicular to the ymolecularz axis. 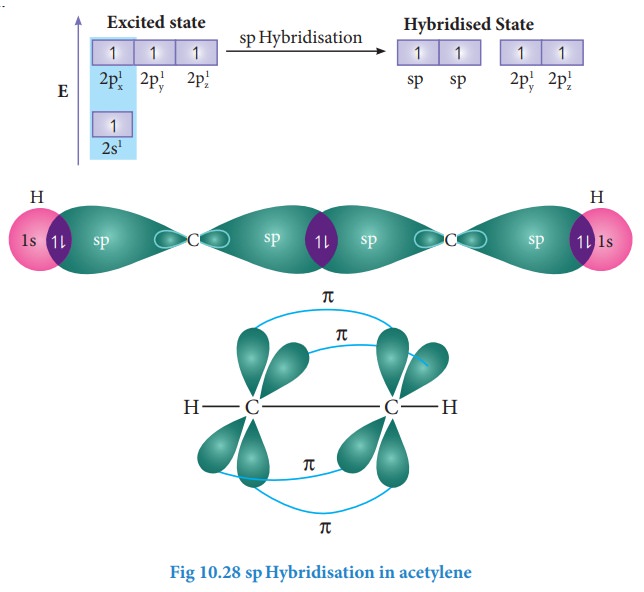 The unhybridised 2py and 2pz orbitals of each carbon overlap sideways. This lateral overlap results in the formation of two pi bonds ( py-py  and pz-pz) between the two carbon atoms as shown in the figure.