Here, a very small, equal and opposite charges are separated by a small distance (91 pm) and is referred to as a dipole. 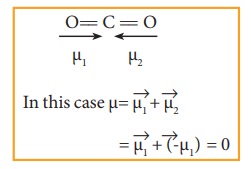 Incase of water net dipole moment is the vector sum of μ1+ μ2 as shown.

Dipole moment in water is found to be 1.85D 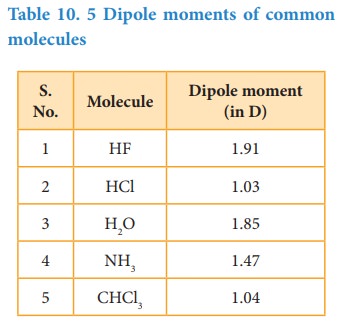 If the electronegativity difference (χA- χB ), is

The partial covalent character in ionic compounds can be explained on the basis of a phenomenon called polarisation. We know that in an ionic compound, there is an electrostatic attractive force between the cation and anion. The positively charged cation attracts the valence electrons of anion while repelling the nucleus. This causes a distortion in the electron cloud of the anion and its electron density drifts towards the cation, which results in some sharing of the valence electrons between these ions. Thus, a partial covalent character is developed between them. This phenomenon is called polarisation.

(ii) The smaller cation and larger anion show greater covalent character due to the greater extent of polarisation.