Let us draw the Lewis structure for carbon dioxide.

3. Draw single bonds between atoms. Two bonds can be drawn as shown in the figure for CO2 which accounts for four electrons (2 bond pairs).

4. Distribute the remaining twelve electrons (16 - 4= 12) as six lone pairs starting from most electronegative atom, the oxygen. Six lone pairs are distributed to the two terminal oxygens (three each) to satisfy their octet.

5. Verify weather all the atoms have octet configuration. In the above distribution, the central carbon has two pair short for octet. Therefore, to satisfy the octet rule two lone pairs from one oxygen or one pair from each oxygen can be moved to form multiple bonds, leading the formation of two possible structures for carbon dioxide as shown below

Similarly, the Lewis structure for many molecules drawn using the above steps gives more than one acceptable structure. Let us consider the above mentioned two structures of carbon dioxide.

Nv- Number of valence electron of atom in its isolated state.

Now let us calculate the formal charge on all atoms in both structures, 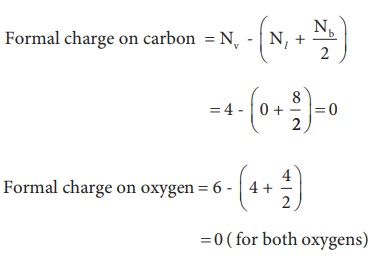 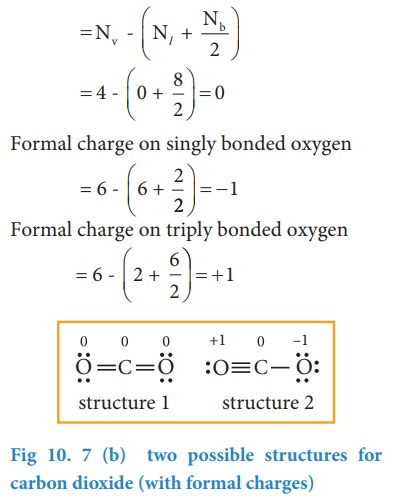 After calculating the formal charges, the best representation of Lewis structure can be selected by using following guidelines.

1. A structure in which all formal charges are zero preferred over the one with charges.

3. A structure in which negative formal charges are placed on the most electronegative atom is preferred.