Ultrastructure of a Bacterial cell 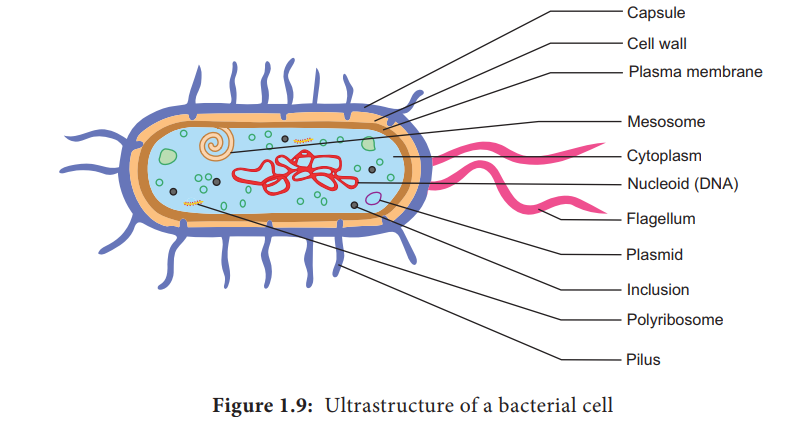 Ultrastructure of a Bacterial cell

Some bacteria are surrounded by a gelatinous substance which is composed of polysaccharides or polypeptide or both. A thick layer of glycocalyx bound tightly to the cell wall is called capsule. It protects cell from desiccation and antibiotics. The sticky nature helps them to attach to substrates like plant root surfaces, Human teeth and tissues. It helps to retain the nutrients in bacterial cell.

The bacterial cell wall is granular and is rigid. It provide protection and gives shape to the cell. The chemical composition of cell wall is rather complex and is made up of Peptidoglycan or mucopeptide ( N-acetyl glucosamine, N-acetyl muramic acid and peptide chain of 4 or 5 aminoacids). One of the most abundant polypeptide called porin is present and it helps in the diffusion of solutes.

The plasma membrane is made up of lipoprotein. It controls the entry and exit of small molecules and ions. The enzymes involved in the oxidation of metabolites (i.e., the respiratory chain) as well as the photosystems used in photosynthesis are present in the plasma membrane.

Cytoplasm is thick and semitransparent. It contains ribosomes and other cell inclusions. Cytoplasmic inclusions like glycogen, poly-β-hydroxybutyrate granules, sulphur granules and gas vesicles are present.

The bacterial chromosome is a single circular DNA molecule, tightly coiled and is not enclosed in a membrane as in Eukaryotes. This genetic material is called Nucleoid or Genophore. It is amazing to note that the DNA of E.coli which measures about 1mm long when uncoiled, contains all the genetic information of the organism. The DNA is not bound to histone proteins. The single chromosome or the DNA molecule is circular and at one point it is attached to the plasma membrane and it is believed that this attachment may help in the separation of two chromosomes after DNA replication.

Plasmids are extra chromosomal double stranded, circular, self-replicating, autonomous elements. They contain genes for ­fertility, antibiotic resistant and heavy metals. It also help in the production of bacteriocins and toxins which are not found in bacterial chromosome. The size of a plasmid varies from 1 to 500 kb usually plasmids contribute to about 0.5 to 5.0% of the total DNA of bacteria. The number of plasmids per cell varies. Plasmids are classified into different types based on the function. Some of them are F (Fertility) factor, R (Resistance)­ plasmids, Col (Colicin) plasmids, Ri (Root ­inducing) plasmids and Ti (Tumour inducing) plasmids.

These are localized infoldings of plasma membrane produced into the cell in the form of vesicles, tubules and lamellae. They are clumped and folded together to maximize their surface area and helps in respiration and in binary fission.

Certain motile bacteria have numerous thin hair like processes of variable length emerge from the cell wall called flagella. It is 20–30 μm in diameter and 15 μm in length. The flagella of Eukaryotic cells contain 9+2 microtubles but each flagellum in bacteria is made up of a single fibril. Flagella are used for locomotion. Based on the number and position of flagella there are different types of bacteria (Figure 1.8) 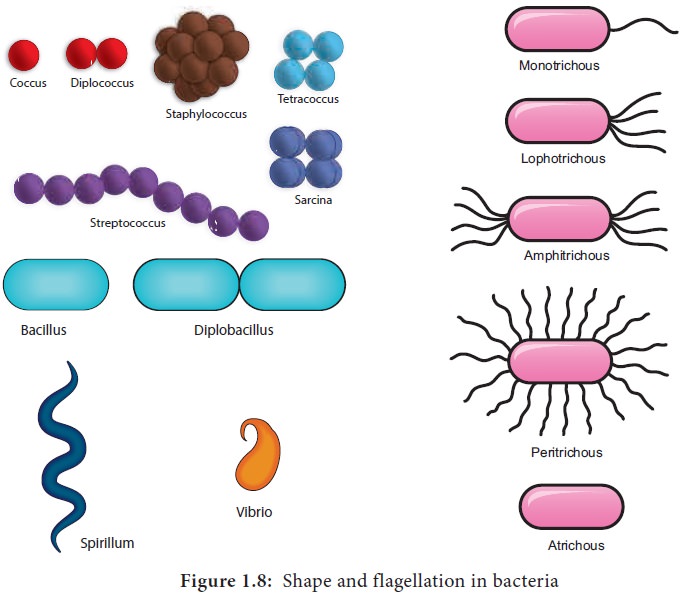 Pili or fimbriae are hair like appendages found on surface of cell wall of gram-negative bacteria (Example: Enterobacterium). The pili are 0.2 to 20 µm long with a diameter of about 0.025µm. In addition to normal pili there are special type of pili which help in conjugation called sex pili are also found.