Fungi provide delicious and nutritious food called mushrooms. They recycle the minerals by decomposing the litter thus adding fertility to the soil. Dairy industry is based on a single celled fungus called yeast. They deteriorate the timber. Fungi cause food poisoning due the production of toxins. The Beneficial and harmful activities of fungi are discussed below:

Mushrooms like Lentinus edodes, Agaricus­ bisporus, Volvariella volvaceae are consumed­ for their high nutritive value. Yeasts provide vitamin B and Eremothe-cium ashbyii is a rich source of Vitamin B12.

Fungi produce antibiotics which arrest the growth or destroy the bacteria­. Some of the antibiotics produced by fungi ­include Penicillin (Penicillium notatum)  Cephalosporins­  (Acremonium chrysogenum­) Griseofulvin (Penicillium griseofulvum). Ergot alkaloids (Ergota-mine) ­produced by Claviceps purpurea is used as vasoconstrictors.

Yeast(Saccharomyces cerevisiae) is used for fermentation of sugars to yield alcohol. Bakeries utilize yeast for the production of Bakery products like Bread, buns, rolls etc., Penicillium roquefortii and Penicillium camemberti were employed in cheese production.

Aspergillus oryzae, Aspergillus niger were employed in the production of enzymes like Amylase, Protease, Lactase etc.,’ Rennet’ which helps in the coagulation of milk in cheese manufacturing is derived from Mucor spp.

Fungi like Beauveria bassiana, Metarhizium anisopliae are used as Biopesticides to eradicate the pests of crops.

Gibberellin, produced by a fungus Gibberella fujikuroi induce the plant growth and is used as growth promoter.

Fungi like Amanita phalloides , Amanita verna, Boletus satanus are highly poisonous due to the production of Toxins. These fungi are commonly referred as “Toad stools”.

Patulin, ochratoxin A are some of the toxins produced by fungi.

Fungi cause diseases in Human beings and Plants (Table 1.11 and Figure 1.25) 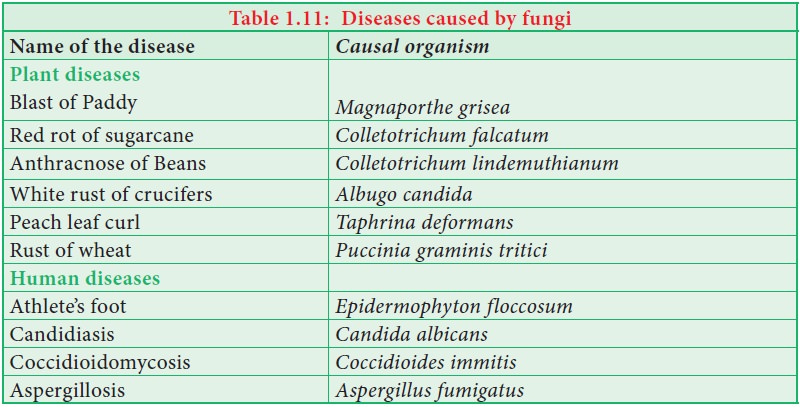