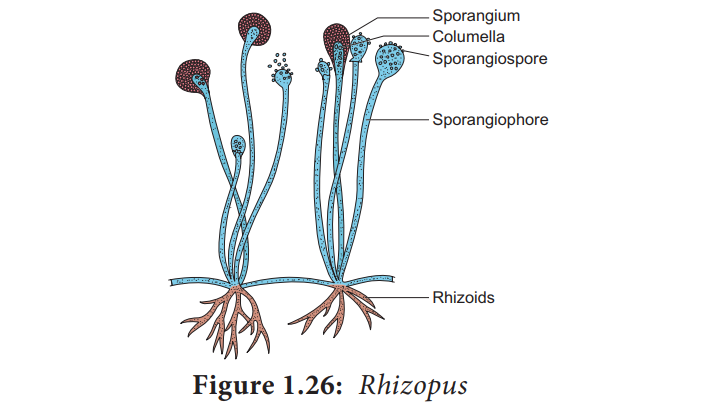 Rhizopus is a saprophytic fungus and grows on substrates like bread, jelly, leather, decaying vegetables and fruits.

Rhizopus is a saprophytic fungus and grows on substrates like bread, jelly, leather, decaying vegetables and fruits. It is commonly called ‘Bread mold’. Rhizopus stolonifer causes leak and soft rot of vegetables

The mycelium consists of aseptate, multinucleate (coenocyte) and profusely branched hyphae. There are horizontally growing aerial hyphae called stolons. The stolons produce rhizoids which are branched and penetrate the substratum and help in absorbing water and nutrients. Sporangiophores are borne exactly opposite to the rhizoids. The cell wall is made up of chitin and chitosan. The cell wall is followed by plasma membrane. The protoplast is granular containing many nuclei. Cell organelles like mitochondria, ribosomes and endoplasmic reticulum are present. The cell inclusions like glycogen and oil droplets are also found. 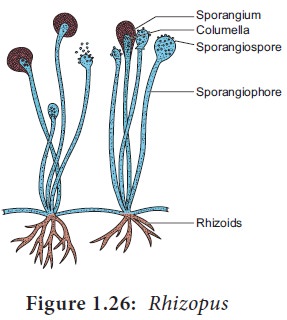 Sexual reproduction is present and takes place through gametangial copulation. Most of the species are heterothallic but Rhizopus sexualis is homothallic. There is no morphological distinction between the two sexual hyphae although physiologically they are dissimilar. Since physiologically dissimilar thalli (hyphae) are involved in sexual reproduction, this phenomenon is called heterothallism. Mycelia which produce gametangia are of opposite strains (+) or (-). The first step is the formation of special hyphae called zygophores. The tips of the two zygophores swell to form progametangia. Further, a septum is formed near the tip of each progametangium and results in the formation of a terminal gametangium and a suspensor cell. The two gametangia fuse, and this is followed by plasmogamy and karyogamy. The fusion of nuclei results in the formation of a diploid zygospore. Many nuclei belonging to opposite strains (+ or –) pair and fuse to form many diploid nuclei. The zygospore enlarges and develops an outer thick dark and warty layer called exine and inner thin layer called intine. After the resting period the nuclei of zygospore undergo meiosis. The zygospore germinates to form sporangiophores and the zygosporangium contain mixture of (+)and (–) spores. When the spores fall on a suitable substratum, they germinate to produce mycelium (Figure 1.20). The life cycle of Rhizopus is given in figure 1.27. 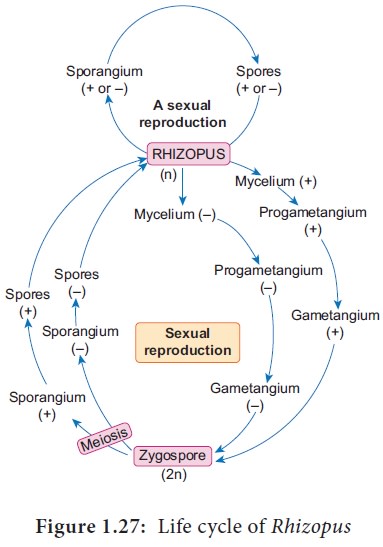 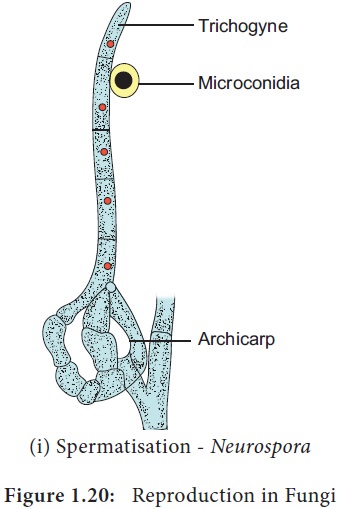