How old are Cyanobacteria ? 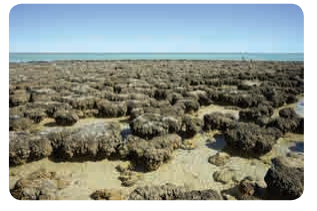 Stromatolites are deposits formed when colonies of cyanobacteria bind with calcium carbonate. They have a geological age of 2.7 billion years. Their abundance in the fossil record indicates that cyanobacteria helped in raising the level of free oxygen in the atmosphere.

Cyanobacteria are popularly called as 'Blue green algae' or 'Cyanophyceae'. They are photosynthetic, prokaryotic organisms. According to evolutionary record Cyanobacteria are primitive forms and are found in different habitats. Most of them are fresh water and few are marine (Trichodesmium and Dermacarpa) Trichodesmium erythraeum a cyanobacterium imparts red colour to sea (Red sea). Species of Nostoc, Anabaena lead an endophytic life in the coralloid root of Cycas, leaves of aquatic fern Azolla and thallus of hornworts like Anthoceros by establishing a symbiotic association and fix atmospheric nitrogen. Members like Gloeocapsa, Nostoc, Scytonema are found as phycobionts in lichen thalli.

•            The members of this group are prokaryotes and lack motile reproductive structures.

•            The thallus is unicellular in Chroococcus, Colonial in Gloeocapsa and filamentous trichome in Nostoc.

•            In some forms a large colourless cell is found in the terminal or intercalary position called Heterocysts. They are involved in nitrogen fixation.

•            They reproduce only through vegetative methods and produce Akinetes (thick wall dormant cell formed from vegetative cell), Hormogonia (a portion of filament get detached and reproduce by cell division), fission, Endospores.

•            The presence of mucilage around the thallus is characteristic feature of this group. Therefore, this group is also called Myxophyceae

•            Microcystis aeruginosa, Anabaena flos-aquae cause water blooms and release toxins and affect the aquatic organism. Most of them fix atmospheric nitrogen and are used as biofertilizers (Example: Nostoc, Anabaena). Spirulina is rich in protein hence it is used as single cell protein. The thallus organisation and methods of reproduction is given in Figure 1.17 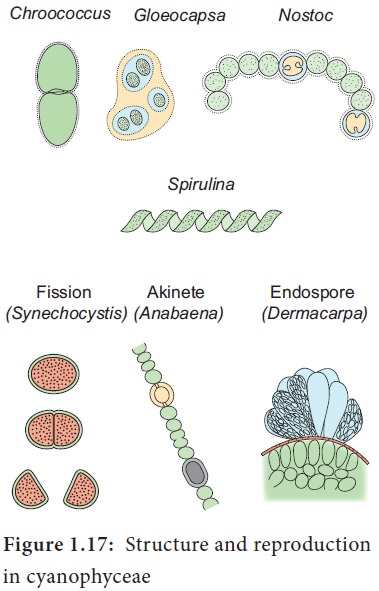