Multiplication or Life Cycle of Phages

Multiplication or Life Cycle of Phages

During lytic cycle of phage, disintegration of host bacterial cell occurs and the progeny virions are released (Figure 1.5a). The steps involved in the lytic cycle are as follows:

Phage (T4) particles interact with cell wall of host (E. coli). The phage tail makes contact between the two, and tail fibres recognize the specific receptor sites present on bacterial cell surface. The lipopolysaccharides of tail fibres act as receptor in phages. The process involving the recognition of phage to bacterium is called landing. Once the contact is established between tail fibres and bacterial cell, tail fibres bend to anchor the pins and base plate to the cell surface. This step is called pinning. 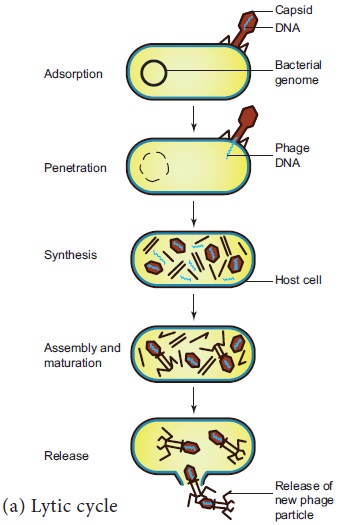 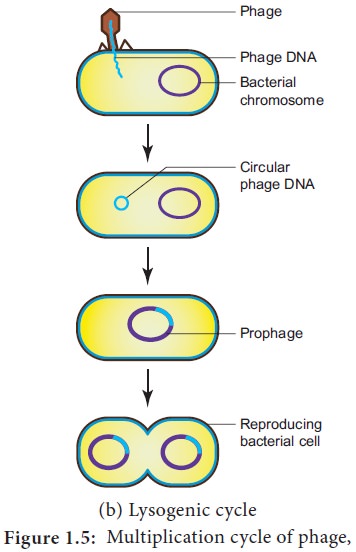 The penetration process involves mechani-cal and enzymatic digestion of the cell wall of the host. At the recognition site phage digests certain cell wall structure by viral enzyme (lysozyme). After pinning the tail sheath contracts (using ATP) and appears shorter and thicker. After contraction of the base plate enlarges through which DNA is injected into the cell wall without using metabolic energy. The step involving ­injection of DNA particle alone into the bacterial cell is called Transfection. The empty protein coat leaving outside the cell is known as ‘ghost’.

This step involves the degradation of bacterial chromosome, protein synthesis and DNA replication. The phage nucleic acid takes over the host biosynthetic machinery. Host DNA gets inactivated and breaks down. Phage DNA suppresses the synthesis of bacterial protein and directs the metabolism of the cell to synthesis the proteins of the phage particles and simultaneously replication of Phage DNA also takes place.

The phage particle gets accumulated inside the host cell and are released by the lysis of host cell wall.

In the lysogenic cycle the phage DNA gets integrated into host DNA and gets multiplied along with nucleic acid of the host. No independent viral particle is formed (Figure 1.5b).

As soon as the phage injects its linear DNA into the host cell, it becomes circular and integrates into the bacterial chromosome by recombination. The integrated phage DNA is now called prophage. The activity of the prophage gene is repressed by two repressor proteins which are synthesized by phage genes. This checks the synthesis of new phages within the host cell. However, each time the bacterial cell divides, the prophage multiplies along with the bacterial chromosome. On exposure to UV radiation and chemicals the excision of phage DNA may occur and results in lytic cycle.

Virion is an intact infective virus particle which is non-replicating outside a host cell.

Viroid is a circular molecule of ssRNA without a capsid and was discovered by T.O.Diener in the year 1971. The RNA of viroid has low molecular weight. Viroids cause citrus exocortis and potato spindle tuber disease in plants.

They are the small circular RNAs which are similar to viroids but they are always linked with larger molecules of the viral RNA.

Prions were discovered by Stanley B. Prusiner in the year 1982 and are pro-teinaceous infectious particles. They are the causative agents for about a dozen ­fatal ­degenerative disorders of the central nervous system of humans and other  animals . For example Creutzfeldt – Jakob Disease (CJD), Bovine Spongiform En-cephalopathy (BSE) – commonly known as mad cow disease and scrapie disease of sheep.