Bacteria reproduces asexually by Binary fission, conidia and endospore formation (Figure 1.12). Among these Binary fission is the most common one. 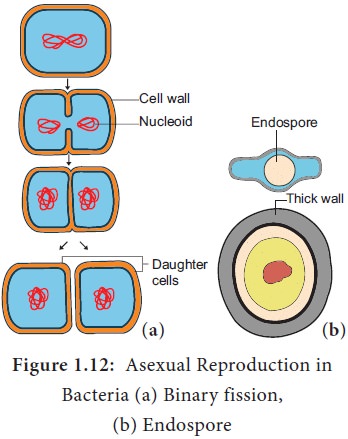 Under favourable conditions the cell divides into two daughter cells. The nuclear material divides first and it is followed by the formation of a simple median constriction which finally results in the separation of two cells.

Typical sexual reproduction involving the formation and fusion of gametes is absent in bacteria. However gene recombination can occur in bacteria by three different methods they are

J. Lederberg and Edward L. Tatum demon-strated conjugation in E. coli. in the year 1946. In this method of gene transfer the donor cell gets attached to the recipient cell with the help of pili. The pilus grows in size and forms the conjugation tube. The plas-mid of donor cell which has the F+ (fer-tility factor) undergoes replication. Only one strand of DNA is transferred to the re-cipient cell through conjugation tube. The recipient completes the structure of double stranded DNA by synthesizing the strand that complements the strand acquired from the donor (Figure 1.13). 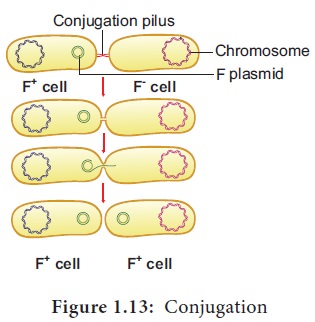 Transfer of DNA from one bacterium to another is called transformation (Figure 1.14). In 1928 the bacteriologist Frederick Griffith demonstrated transformation in Mice using Diplococcus pneumoniae. Two strains of this bacterium are present. One strain produces smooth colonies and are virulent in nature (S-type). In addition another strain produce rough colonies and are avirulent (R-type). When S-type of cells were injected into the mouse, the mouse died. When R-type of cells were injected, the mouse survived. He injected heat killed S-type cells into the mouse the mouse did not die. When the mixture of heat killed S-type

cells and R-type cells were injected into the mouse. The mouse died. The avirulent rough strain of Diplococcus had been transformed into S-type cells. The hereditary material of heat killed S-type cells had transformed R-type cell into virulent smooth strains. Thus the phenomenon of changing the character of one strain by transferring the DNA of another strain into the former is called Transformation. 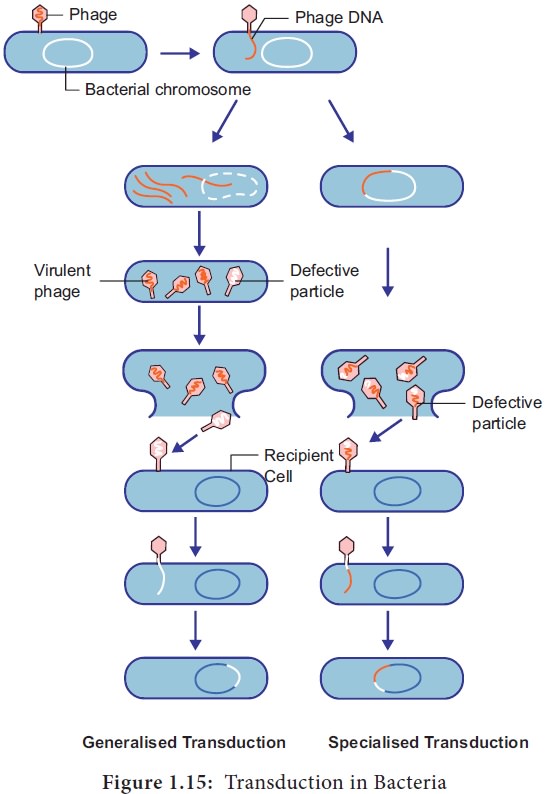 Transduction is of two types

The ability of a bacteriophage to carry genetic material of any region of bacterial DNA is called Generalised transduction.

The ability of the bacteriophage to carry only a specific region of the bacterial DNA is called specialized or restricted transduction.