Lichens and its Classification - Fungi 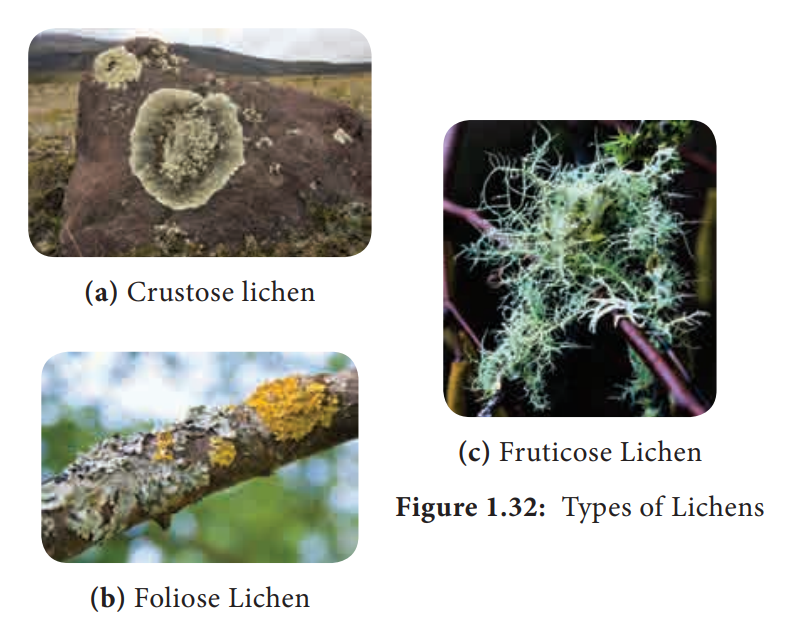 The symbiotic association between algae and fungi is called lichens.

•            On the basis of morphology of the thallus they are divided into Leprose (a distinct fungal layer is absent) Crustose-crust like; Foliose-leaf like; Fruticose- branched pendulous shrub like (Figure 1.32).

•            The distribution of algal cells distinguishes lichens into two forms namely Homoiomerous (Algal cells evenly distributed in the thallus) and Heteromerous (a distinct layer of algae and fungi present).

•            If the fungal partner of lichen belongs to ascomycetes, it is called Ascolichen and if it is basidiomycetes it is called Basidiolichen.

Lichens secrete organic acids like Oxalic acids which corrodes the rock surface and helps in weathering of rocks, thus acting as pioneers in Xerosere. Usnic acid produced from lichens show antibiotic properties. Lichens are sensitive to air pollutants especially to sulphur- di-oxide. Therefore, they are considered as pollution indicators. The dye present in litmus paper used as acid base indicator in the laboratories is obtained from Roccella montagnei. Cladonia rangiferina (Reindeer moss) is used as food for animals living in Tundra regions.