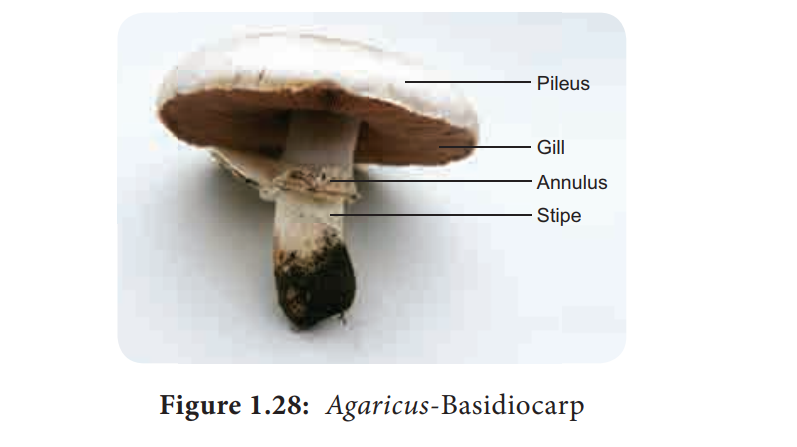 It is a saprophytic fungus found on wood logs, manure piles, fresh litter, pastures etc., The fruit bodies are the visible part of the fungi. They are found in rings in some species like Agaricus arvensis, Agaricus tabularis and hence popularly called ‘Fairy rings”. Agaricus campestris is the most common ‘field mushroom’.

The thallus is made up of branched structures called hyphae. A large number of hyphae constitute the mycelium.

Agaricus reproduces by sexual method but sex organs are absent.Majority of the species are heterothallic. Agaricus bisporus is a homothallic species. The opposite strains of mycelium fuse(somatogamy) and results in the formation of dikaryotic or secondary mycelium. Karyogamy takes place in basidium and it is immediately followed by meiosis giving rise to four haploid basidiospores. The basidiospores are borne on sterigmata. The subterranean mycelial strands called rhizomorphs posssess dense knots of dikaryotic hyphae. These knots develop into Basidiocarps.

The mature basidiocarp is umbrella shaped and is divided into 3 parts namely stipe, pileus and gill. The stipe is thick, fleshy and cylindrical in structure. The upper part of the stipe possess a membranous structure called annulus. The upper convex surface is called Pileus which is white or cream in colour (Figure 1.28). The inner surface of pileus shows radially arranged gills or lamellae. The gills vary in length. On both the sides of the gills a fertile layer called hymenium is present. The stipe is hollow from the centre and the central part is made up of loosely arranged hyphae whereas the periphery is made up of compactly arranged hyphae forming pseudoparenchymatous tissue. The gill region is divided into 3 regions. The central part of gill between two hymenial layers is called Trama (Figure 1.29). The subhymenial layers have closely compact tissue . The hymenium is the fertile layer and possess club shaped basidia. The basidium is interspersed with sterile hyphae called paraphysis. Each basidium bears 4 basidiospores , of these two basidiospore belong to (+) strain and other two of them will be (–) strain. The basidiospores are borne on stalk like structures called Sterigmata. The basidiospore on germination produces the haploid primary mycelium. 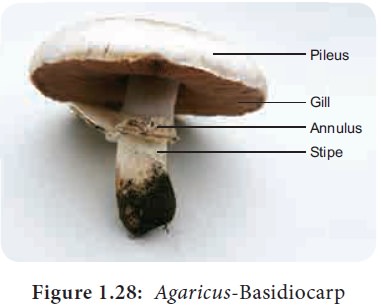 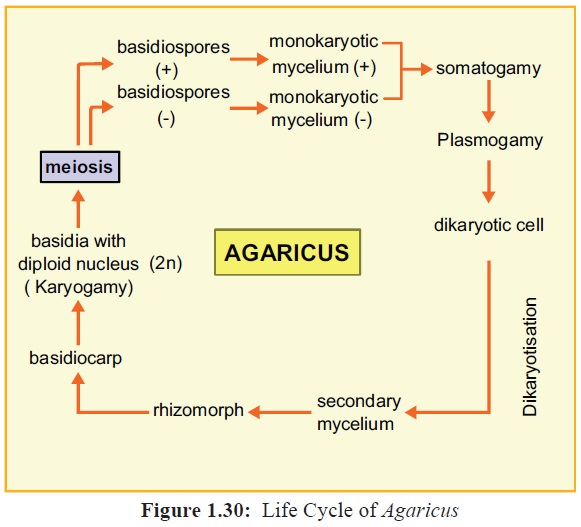