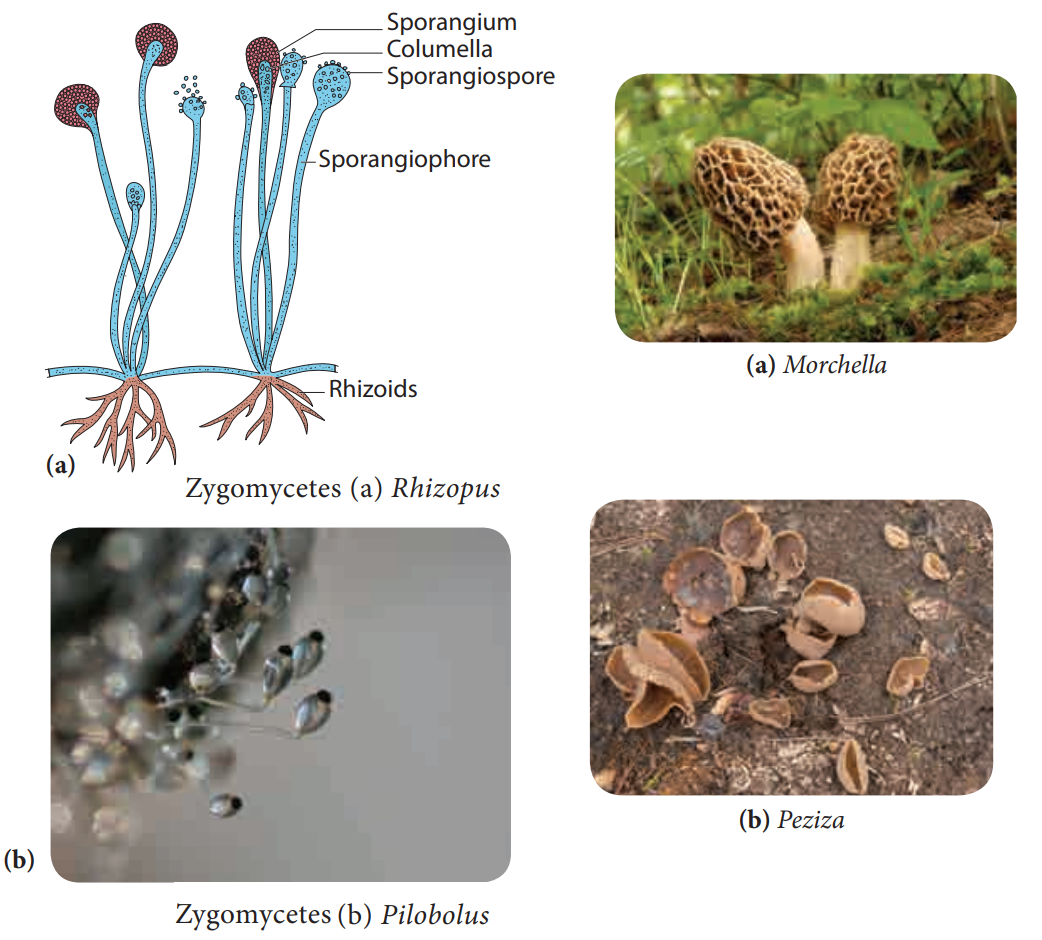 Include achlorophyllous, saprophytic or parasitic organisms with Unicellular or multicellular (Mycelium) thallus surrounded by chitinous cell wall. Nutrition is absorptive except slime molds.Reproduction is through asexual and Sexual methods.

Unicellular to multicellular forms are included. The mycelium is septate.

Recently, with the advent of molecular methods myxomycetes and oomycetes were reclassified and treated under chromista.

The salient features of some of the classes – Oomycetes, Zygomycetes, Ascomycetes, Basidiomycetes and Form class Deuteromycetes are discussed below.

Coenocytic mycelium is present. The cell wall is made up of Glucan and Cellulose. Zoospore with one whiplash and one tinsel flagellum is present. Sexual reproduction is Oogamous. Example: Albugo.

•            Most of the species are saprophytic and live on decaying plant and animal matter in the soil. Some lead parasitic life (Example: Entomophthora on housefly)

• The mycelium is branched and coenocytic

•            Asexual reproduction by means of spores produced in sporangia.

•            Sexual reproduction is by the fusion of the gametangia which results in thick walled zygospore. It remains dormant for long periods. The zygospore undergoes meiosis and produce spores.

• Ascomycetes  include  a  wide  range of fungi such as yeasts, powdery mildews, cup fungi, morels and so on (Figure 1.22).

•            Although majority of the species live in terrestrial environment, some live in aquatic environments both fresh water and marine.

•            Majority of them are saprophytes but few parasites are also known (Powdery mildew – Erysiphe).

•            Plasmogamy is not immediately followed by karyogamy, instead a dikaryotic condition is prolonged for several generations.

•            A crozier is formed when the tip of the ascogenous hyphae recurves forming a hooked cell. The two nuclei in the penultimate cell of the hypha fuse to form a diploid nucleus. This cell form young ascus.

•            The ascospores are found inside a bag like structure called ascus. Due to the presence of ascus, this group is popularly called "Sac fungi".

•            The members are terrestrial and lead a saprophytic and parasitic mode of life.

•            The mycelium is well developed, septate with dolipore septum(bracket like). Three types of mycelium namely Primary (Monokaryotic), Secondary (Dikaryotic) and tertiary are found.

•            Sexual reproduction is present but sex organs are absent. Somatogamy or spermatisation results in plasmogamy. Karyogamy is delayed and dikaryotic phase is prolonged. Karyogamy takes place in basidium and it is immediately followed by meiotic division.

•            The four nuclei thus formed are transformed into basidiospores which are borne on sterigmata outside the basidium (Exogenous ). The basidium is club shaped with four basidiospores, thus this group of fungi is popularly called “Club fungi”. The fruit body formed is called Basidiocarp.

The fungi belonging to this group lack sexual reproduction and are called imperfect fungi. A large number of species live as saprophytes in soil and many are plant and animal parasites. Asexual reproduction takes place by the production of conidia, chlamydospores, budding, oidia etc., Conidia are also produced in special structures called pycnidium, Acervulus, sporodochium and Synnema (Figure 1.24). Parasexual cycle operates in this group of fungi. This brings genetic variation among the species. 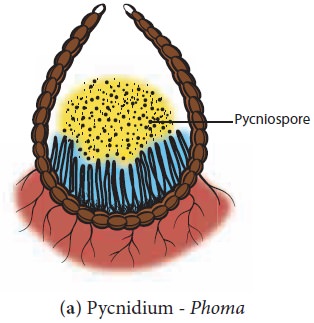