Thermodynamic processes and its Types

The method of operation which can bring about a change in the system is called thermodynamic process.

A thermodynamic process can be carried out in different ways and under different conditions. The processes can be classified as follows:

The process in which the system and surrounding can be restored to the initial state from the final state without producing any changes in the thermodynamic properties of the universe is called a reversible process. There are two important conditions for the reversible process to occur. Firstly, the process should occur infinitesimally slowly and secondly throughout the process, the system and surroundings must be in equilibrium with each other.

For an adiabatic process q = 0

For an isothermal process dT = 0

An isobaric process is defined as one in which the pressure of the system remains constant during its change from the initial to final state.

For an isobaric process dP= 0 .

An isochoric process is defined as the one in which the volume of system remains constant during its change from initial to final state. Combustion of a fuel in a bomb calorimeter is an example of an isochoric process.

For an isochoric process, dV= 0.

When a system returns to its original state after completing a series of changes, then it is said that a cycle is completed. This process is known as a cyclic process. 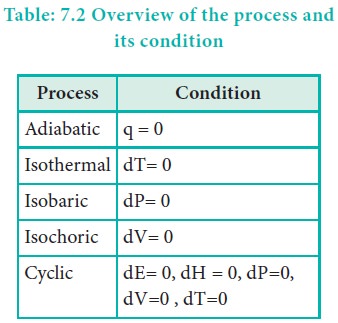