26. State the first law of thermodynamics.

"Energy can neither be created nor destroyed, but may be converted from one form to another"

The enthalpy change of a reaction either at constant volume or constant pressure is the same whether it takes place in a single or multiple steps.

Intensive properties are the properties that is independent of the mass or size of the system.

a. Isothermal process is defined as one in which the temperature of the system remains constant, during the change from its initial to final states. ie., dT = 0

b. The process in which no heat can flow into or out of the system is called adiabatic process ie., q = 0

c. Isobaric process is defined as one in which the Pressure of the system remains constant during its change from the initial to final state ie., dp = 0

d. Isochoric process is defined as one in which the volume of system remains constant during its change from initial to final state of the process, i.e., dv = 0

Entropy is a measure of randomness or disorderliness of the system. Entropy (s) is equal to heat energy (q) divided by constant temperature.

31. Predict the feasibility of a reaction when

i) both ΔH and ΔS positive

ii) both ΔH and ΔS negative

i) when both ΔH and ΔS are positive, then ΔG to be −ve only reaction is carried out at high temperature it is feasible.

In otherwords, TΔS > ΔH, then the reaction is feasible.

ii) When both ΔH and ΔS are negative, then ΔG to be −ve only if reaction is carried out at low temperature is, it is feasible. In other words,

TΔS < ΔH, then the reaction is feasible.

iii) When ΔH is −ve but ΔS is +ve, the ΔG becomes −ve is feasible at constant temperature.

"Gibbs free energy is defined as the part of the total energy of a system that can be converted (or) available for conversion into work".

Enthalpy of combustion of a substance is defined as "The change in enthalpy of a system when one mole of the substance is completely burnt in excess of air or oxygen". It is denoted by ΔHC.

The Calorific value of food is defined as :

37. What is lattice energy?

Lattice energy is defined as the amount of energy required to completely separate one mole of a solid ionic compound into gaseous constituent. It is also referred as lattice enthalpy.

38. What are state and path functions? Give two examples.

The variables like P,V,T and 'n' that are used to describe the state of a system are called as state functions. A state function is a thermodynamic property of a system, which has a specific value for each state of the system and does not depend on the path (or manner ) in which a particular state is reached.

A path function is a thermodynamic property of the system whose value depends on the path or manner by which the system goes from its initial to final states. Example: Work (w), Heat (q).

39. Give Kelvin statement of second law of thermodynamics.

It is impossible to take heat from a hotter reservoir and convert it completely into work by a cyclic process without transferring a part of heat to a cooler reservoir.

40. The equilibrium constant of a reaction is 10, what will be the sign of ∆G? Will this reaction be spontaneous?

since, ΔG is −ve, the reaction is spontaneous.

41. Enthalpy of neutralization is always a constant when a strong acid is neutralized by a strong base: account for the statement.

42. State the third law of thermodynamics.

The third law of the thermodynamics states that the entropy of pure crystalline substance at absolute zero is zero (or) otherwise it can be states as " it is impossible to lower the temperature of an object to absolute zero in a finite number of steps. Mathematically

43. Write down the Born-Haber cycle for the formation of CaCl2

Born - Haber cycle for the formation of CaCl2 as follows:

According to Hess's law of constant heat of summation;

Where ΔHf = Enthalpy change for formation of CaCl2

U = Lattice enthalpy for formation of CaCl2.

45. State the various statements of second law of thermodynamics.

"whenever a spontaneous process takes place, it is accompanied by an increase in the total entropy of the Universe".

It is impossible to take heat from hotter reservoir and convert it completely into work by a cyclic process without transferring a part of heat to a cooler reservoir.

Heat flows spontaneously from hot objects to cold objects and to get it flow in the opposite direction, we have to expend some work.

46. What are spontaneous reactions? What are the conditions for the spontaneity of a process?

A reaction which takes place on their own accord without proper initiation is called spontaneous reaction. All natural process are spontaneous.

The necessary condition for a reaction to be spontaneous is Δ H –TΔS < 0, then only ΔG will be negative.

● Characteristics of internal energy (U):

● Internal energy of a system is a state function. It depends only upon the state variables ( T, P, V, n) of the system. The change in internal energy does not depend on the path by which the final state is reached.

48. Explain how heat absorbed at constant volume is measured using bomb calorimeter with a neat diagram.

For chemical reactions, heat evolved at constant volume, is measured in a bomb calorimeter.

● The inner vessel( the bomb) and its cover are made of strong steel. The cover is fitted tightly to the vessel by means of metal lid and screws.

● A weighted amount of the substance is taken in a platinum cup connected with electrical wires for striking an arc instantly to kindle combustion. The bomb is then tightly closed and pressurized with excess oxygen. 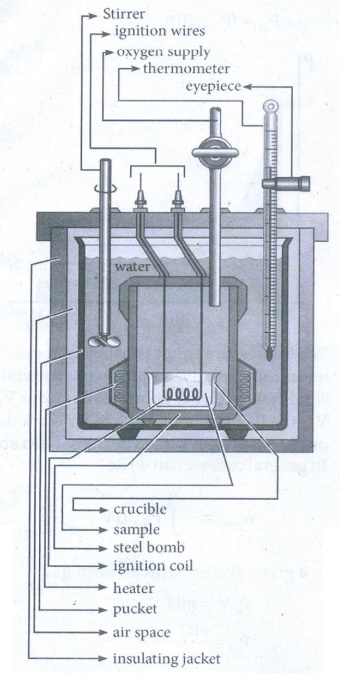 ● The reaction is started by striking the substance through electrical heating.

● A known amount of combustible substance is burnt in oxygen in the bomb. Heat evolved during the reaction is absorbed by the calorimeter as well as the water in which the bomb is immersed using a Beckman thermometer.

● Since the bomb is sealed its volume does not change and hence the heat measurements is equal to the heat of combustion at a constant volume (ΔU)c.

● The amount of heat produced in the reaction (ΔU)c is equal to the sum of the heat abosrbed by the calorimeter and the water.

49. Calculate the work involved in expansion and compression process.

● In most thermodynamic calculations we are dealing with the evaluation of work involved in the expansion or compression of gases. 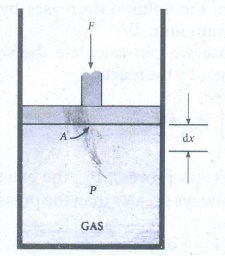 ● For understanding pressure volume work, let us consider a cylinder which contains 'n' moles of an ideal gas fitted with a frictionless piston of cross sectional area A.

● If the external pressure Pext is greater than Pint, the piston moves inward till the pressure inside becomes equal to Pext. Let this change be achieved in a single step and the final volume be Vf.

In this case, the work is done on the system (+ w). It can be calculated as follows

where dx is the distance moved by the piston during the compression and F is the force action on the gas.

Since work is done on the system, it is a positive quantity.

● If the pressure is not constant, but changes during the process such that it is always infinitesimally greater than the pressure of the gas, then, at each stage of compression, the volume decreases by an infinitesimal amount, dV.

In a compression process, Pext the external pressure is always greater than the pressure of the system.

In an expansion process, the external pressure is always less than the pressure of the system 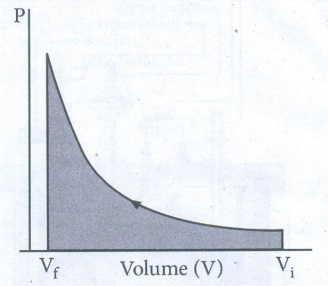 ● When pressure is not constant and changes in infinitesimally small steps (reversible conditions) during compression from Vi to Vf, the P-V plot looks like in fig work done on the gas is represented by the shaded area. In general case we can write,

For a given system with an ideal gas 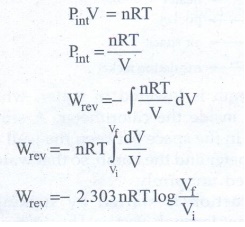 If Vf >Vi (expansion), the sign of work done by the process is negative.

If Vf <Vi (compression) the sign of work done on the process is positive.

50. Derive the relation between ∆H and ∆U for an ideal gas. Explain each term involved in the equa-tion.

● Let us use the Born - Haber cycle for determining the lattice enthalpy of NaCl as follows:

● Since the reaction is carried out with reactants in elemental forms and products in their standards states, at 1 bar the overall enthalpy of formation of NaCl.

● Also, the formation of NaCl can be considered in 5 steps. 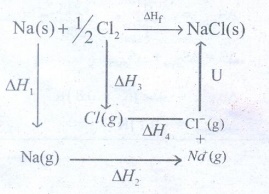 U = Lattice energy of NaCl

This negative sign in lattice energy indicates that the energy is released when sodium is formed from its constituent gaseous ions Na+ and Cl−.

2. G is a state Function and is a single valued function

4. ΔG = ΔH − TΔS expression is used to predict the spontaneity of a process.

5. ΔG gives a criteria for spontaneity at constant pressure and temperature.

6. For any system at constant pressure and temperature

But −P ΔV represents the work done due to expansion against a constant external pressure. Therefore, it is clear that the decrease in free energy (−ΔG) accompanying a process taking place at constant temperature and pressure is equal to the maximum work obtainable from the system other than the work of expansion.

7. Standard free energy of formation of elements are taken as zero.