Triacylglycerols are simple lipids in which glycerol backbone is esterified with three fatty acids.

Triacylglycerols are simple lipids in which glycerol backbone is esterified with three fatty acids. This form the major part of dietary lipids. They are stored in adipose tissue and serve as concentrated fuel reserve of the body.

·           Specific gravity of fats is lower than water. Therefore fats and oils float on water.

·           They are tasteless, odourless, colourless and neutral in solution.

On boiling with water at 200°C, triacyl glycerols are hydrolysed to glycerol and fatty acids in a stepwise manner. 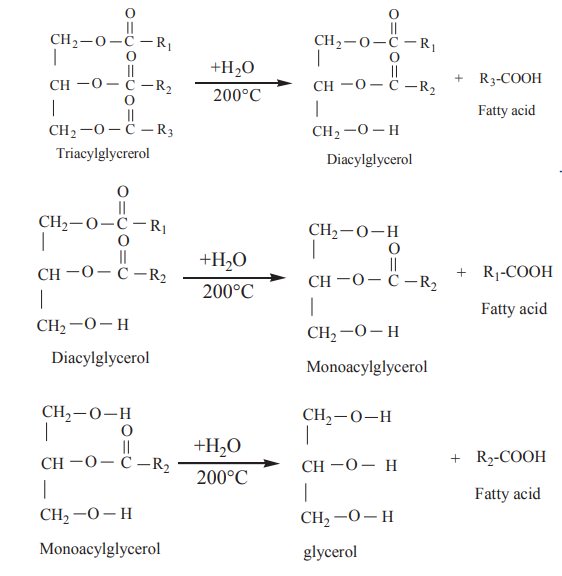 The reaction can also be catalysed by the enzymes lipases.

This reaction is of great commercial importance since it permits transformation of inexpensive and unsaturated liquid vegetable fats into solid fats. The latter are used in the manufacture of candles, vegetable shortenings like vanaspathi and oleomargarine.

Boiling with an alcoholic solution of strong metallic alkali hydrolyses triacyl glycerol into soap and fatty acid. This process is called as saponification.

Soaps are important cleansing agents. Their cleansing property is due to their emulsifying action. This is accomphlised by means of negative charge the soap anion confers on oil droplets. The electrostatic repulsion then prevents the coalescene of soap and results in the removal of dirt particles.

Unsaturated fatty acids in the triacyl glycerol take up chlorine, bromine and iodine atoms at their double bonds to form saturated halogenated derivatives.

On storage, unsaturated fatty acids present in the fat are likely to undergo oxidation and hydrolytic cleavage in the presence of lipases present in the fat itself or secreted by the contaminating microorganisms. This leads to change of colour and odour of the fat. This change is called as rancidity. This occurs due to the formation of peroxides at the double bonds of unsaturated fatty acids. Rancidity can be prevented by certain antioxidants such as vitamin -E, gallic acid, butylated hydroxy toluene etc.Vegetable oils are less rancid because of the presence of natural antioxidants such as vitamin E and carotenoids.

There are certain chemical constants used for the characterisation of fats.

It is the number of milligrams of KOH required to neutralize the free fatty acids present in 1 gm of fat. The acid number, thus, tells us about the quantity of free fatty acid present in a fat. Obviously, a fat which has been processed and stored properly has a very low acid number.

It is the number of millilitres of 0.1 N KOH required to neutralize the insoluble fatty acids. This indicates the level of non volatile fatty acids present in the fat.

It is the number of millilitres of 0.1 N KOH required to neutralize the soluble, volatile fatty acids derived from 5 gm of fat. The Reichert- Meissl number thus, measures the quantity of short chain fatty acids in the fat molecule.

It is the number of milligrams of KOH required to neutralize the acetic acid obtained by saponification of 1 gm of fat after it has been acetylated. The acetyl number is, thus, a measure of the number of OH groups in the fat.