Sterols are compounds containing a cyclic nucleus namely cyclopentanoperhydro phenanthrene (CPPP) and one or more hydroxyl groups. They are widely present in animal and plant tissue.

Cholesterol is exclusively found in animals and is the most abundant animal sterols. It is widely distributed in all cells and is a major component of cell membrane and lipoproteins. In human beings, it is very important to control the normal level of cholesterol in blood.

Cholesterol is a C27(C27H46O) compound. It has one hydroxyl group at C3 and a double bond between C5 and C6. An aliphatic side chain is attached to C17. Cholesterol contains a total of 5 methyl groups (Fig. 6.1). 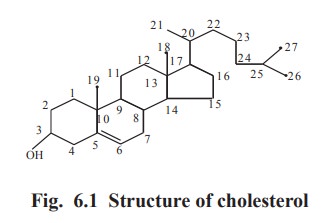 ·           Cholesterol, when oxidised under suitable conditions, undergoes rapid oxidation to form a ketone-cholestenone.

·           It gives addition reactions such as hydrogenation and halogenation because of the presence of double bond.

Ergosterol occur in plants. It is also found in yeast and fungi as the structural constituent of membranes. It is an important precursor for vitamin-D. When exposed to light, it is converted to ergocaliciferol, a compound containing vitamin-D activity. 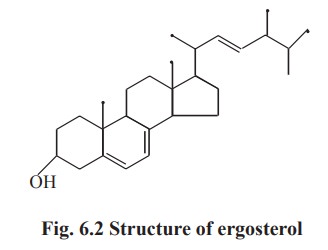 Its structure is similar to that of cholesterol, but differs in the following aspects.

It is structurally similar to that of ergosterol except at C7 (Fig. 6.3) Stigmasterol and its derivatives sitosterols are probably the mostcommon sterol of plants. The important sources are soya bean and calabar beans. 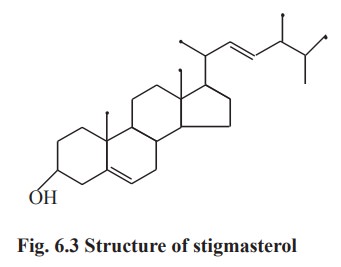