Home | | Plant Biochemistry | Lipoxygenase is involved in the synthesis of oxylipins, which are defense and signal compounds
Posted On :  04.08.2017 01:11 am

Lipoxygenase is involved in the synthesis of oxylipins, which are defense and signal compounds

Oxylipins, which derive from the oxygenation of unsaturated fatty acids, comprise a multiplicity of various signal compounds in animals and plants.

Lipoxygenase is involved in the synthesis of oxylipins, which are defense and signal compounds

Oxylipins, which derive from the oxygenation of unsaturated fatty acids, comprise a multiplicity of various signal compounds in animals and plants. In animals, oxylipins include prostaglandins, leucotriens, and thrombox-ans, of which the specific roles in the regulation of physiological processes are known to a large extent. Likewise, plant oxylipins comprise a very large number of compounds mostly different from those in animals. They are involved in defense reactions (e.g., as signal components to regulate defense cascades), but also as fungicides, bactericides, and insecticides, or as volatile signals to attract predators, such as insects that feed on herbivores. Moreover, they participate in wound healing, regulate vegetative growth, and induce senescence. Our knowledge about these important compounds is still fragmentary.

In plants, oxylipins are synthesized primarily via lipoxygenases. These are dioxygenases, mediating the incorporation of both atoms of the oxygen mole­ cule into the fatty acid molecule, in contrast to monooxygenases, which cat-alyze the incorporation of only one O atom of an O2 molecule . The lipoxygenases are a family of enzymes catalyzing the dioxygenation of multiple-unsaturated fatty acids, such as linoleic acid and linolenic acid, with an intramolecular cis, cis-1,4-pentadiene sequence (colored red in Fig. 15.29). At one end of this sequence, a hydroperoxide group is introduced by oxy-genation and the neighboring double bond is shifted by one C-position to the direction of the other double bond, thereby attaining a trans-configura-tion. The hydroperoxide lyase catalyzes the cleavage of hydroperoxylinolenic acid into a 12-oxo-acid and a 3-cis-hexenal. Other hexenals are synthesized by shifting the double bond, and reduction leads to the formation of hex-enols (Fig. 15.29). 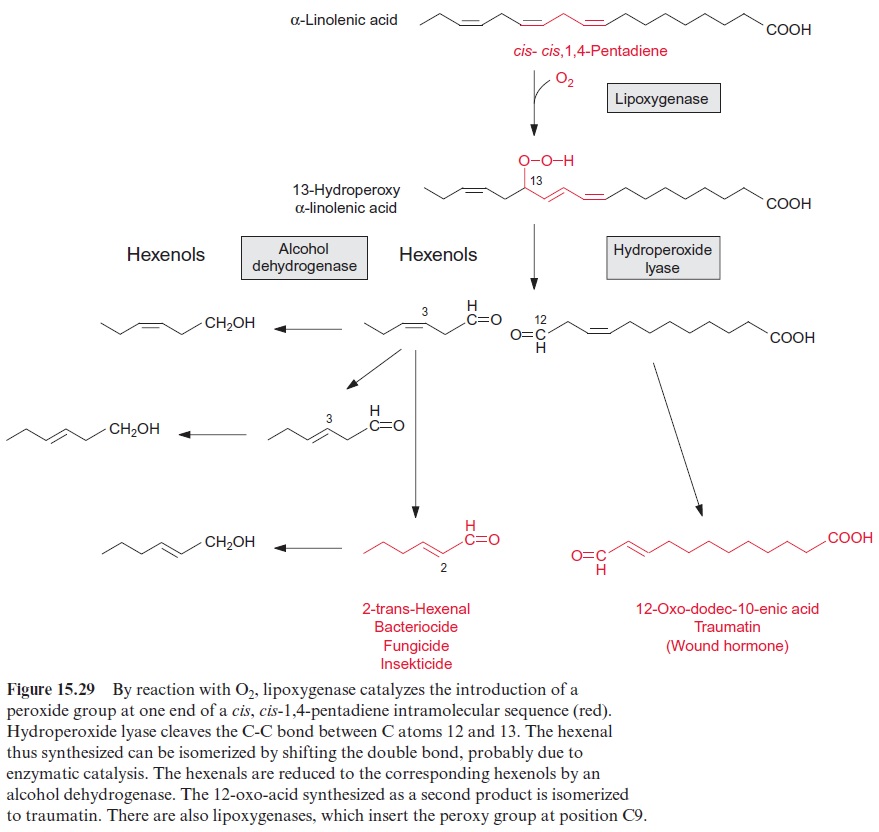 Hexanals, hexenals, hexanols, and hexenols are volatile aromatic com-pounds that are important components of the characteristic odor and taste of many fruits and vegetables. The wide range of aromas includes fruity, sweet, spicy, and grass like. Work is in progress to improve the taste of tomatoes by increasing their hexenol content by genetic engineering. The quality of olive oil, for instance, depends on its content of hexenals and hexenols. Hexenals are responsible for the aroma of black tea. Green tea is processed to black tea by heat and fermentation, resulting in the condensation of hexenals to aro-matic compounds, which give black tea its typical taste. Large amounts of hexenals and hexenols are produced industrially as aromatic components for the food industry or the production of perfumes.

The characteristic smell of freshly cut grass is caused primarily by the release of hexenals and hexenols, indicating that the activity of lipoxygen-ase and hydroperoxide lyase is greatly increased by tissue wounding. This is part of a defense reaction, e.g., when leaves are damaged by feeding larvae, enemies of the herbivores are attracted by the emission of the volatiles. To give an example: after the wounding of corn or cotton by caterpillars, para-sitic wasps are attracted, which inject their eggs into the feeding caterpillar and the developing larvae of the wasps subsequently destroy the herbiv-ore. Moreover, 2-trans-hexenal itself (colored red in Fig. 15.29) is a strong bactericide, fungicide, and insecticide. Hexenals also interact with tran-scription factors in defense reactions. 12-Oxo-dodec-10-enic acid, which is released as a cleavage product of hydroperoxylinolenic acid by the shifting of a double bond, has the properties of a wound hormone and has there-fore been named traumatin. Traumatin induces cell division in neighboring cells, resulting in the formation of calli and wound sealing. However, our knowledge of latter defense processes is still fragmentary. 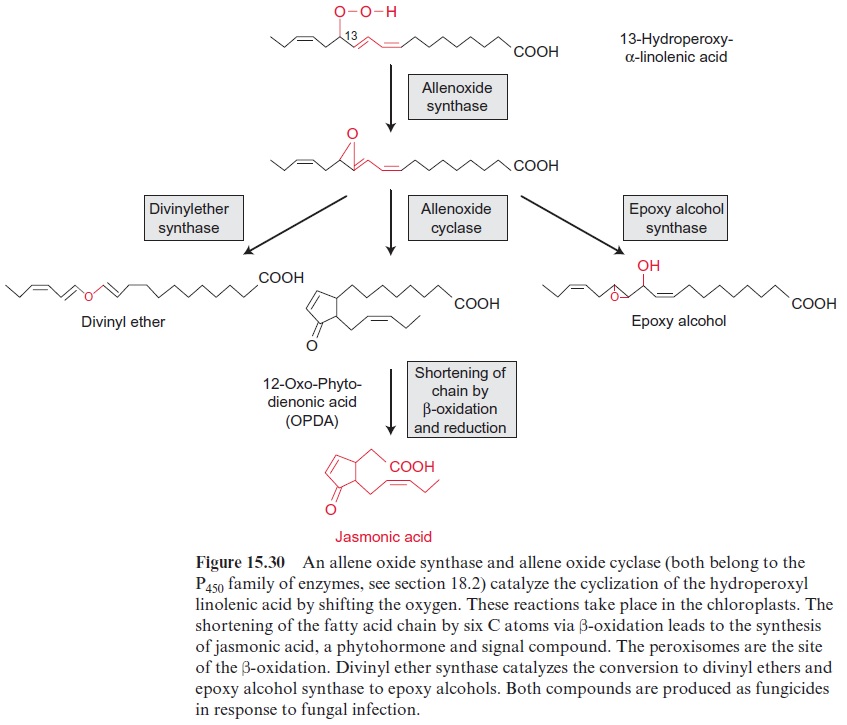 Hydroperoxy- α-linonelic acid is converted by divinyl ether synthase into a divinyl ether (Fig. 15.30). Such divinyl ethers are formed as fungi-cide in very high amounts in potato after infection with the noxious fun-gus Phytophtera infestans. Allene oxide synthase and cyclase catalyze the cyclization of 13-hydroperoxy-α -linolenic acid (Fig. 15.30). Shortening of the hydrocarbon chain of the product by β-oxidation (Fig. 15.25) results in the formation of jasmonic acid. Plants contain many derivatives of jas-monic acid, including sulfatated compounds and methyl esters, which are collectively termed jasmonates. They represent a family of compounds with distinct hormone-like functions. It has been estimated that the jasmonates in total regulate the expression of several hundred genes. They play, for instance, an important role in plant resistance to insects and disease; the formation of flowers, fruits, and seeds; and the initiation of senescence . 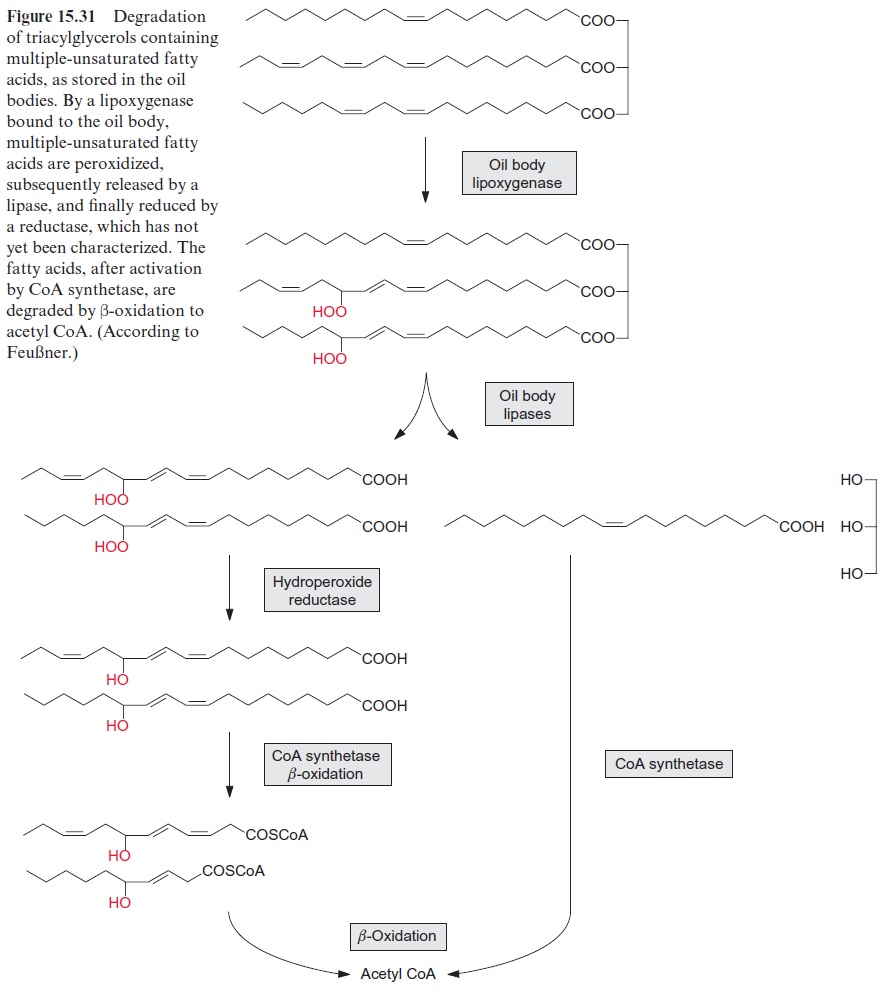 It was also shown that lipoxygenases are involved in the mobilization of storage lipids present in oil bodies. The lipid monolayer enclosing the oil bodies contains among other proteins lipoxygenases. The latter catalyze the introduction of peroxide groups into multiple-unsaturated fatty acids, as long as they are constituents of triacylglycerols (Fig. 15.31). Only after this peroxidation are these triacylglycerols hydrolyzed by a lipase, which is also bound to the oil body. The released peroxy fatty acids are reduced to hydroxy fatty acids, which are concomitantly degraded in the glyoxy-somes to acetyl CoA by β-oxidation (Fig. 15.25). This pathway for the mobilization of storage lipids exists in parallel to the “classic” pathway of triacylglycerol mobilization initiated by the activity of lipases, as discussed previously. The contribution of each pathway in lipid mobilization varies in the different plant species. The acetyl CoA thus generated is substrate for gluconeogenesis via the glyoxylate cycle (Fig. 15.27). 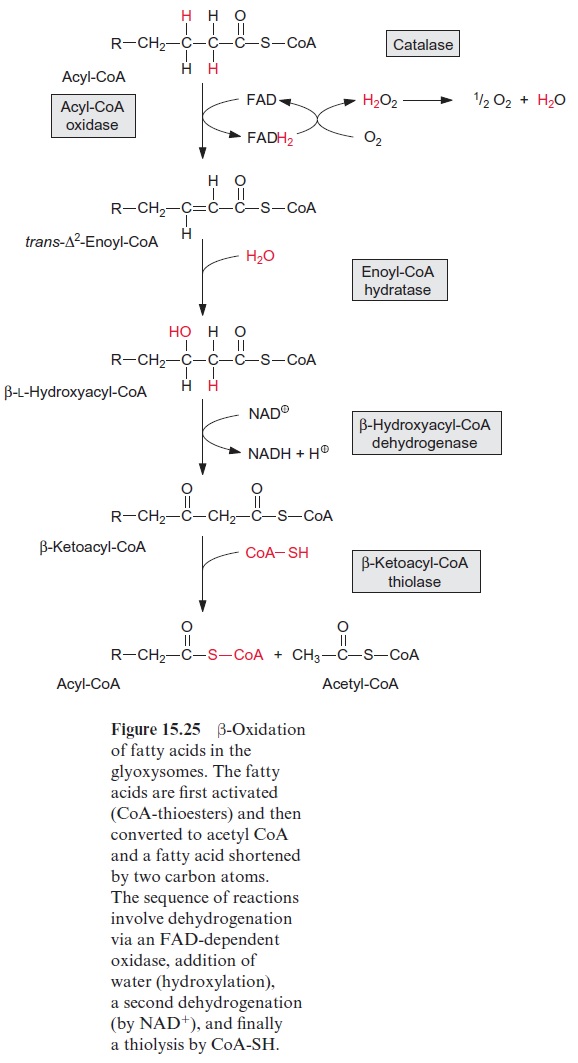