Lipid-Soluble Vitamins and Their Functions

What is the role of lipid-soluble vitamins in the body?

Lipid-Soluble Vitamins and Their Functions

What is the role of lipid-soluble vitamins in the body?

Some vitamins, having a variety of functions, are of interest because they are soluble in lipids. These lipid-soluble vitamins are hydrophobic, which accounts for their solubility (Table 8.3).

The extensively unsaturated hydrocarbon β-carotene is the precursor of vitaminA, which is also known as retinol. As the name suggests,b-carotene is abundantin carrots, but it also occurs in other vegetables, particularly the yellow ones. When an organism requires vitamin A, β-carotene is converted to the vitamin (Figure 8.28). 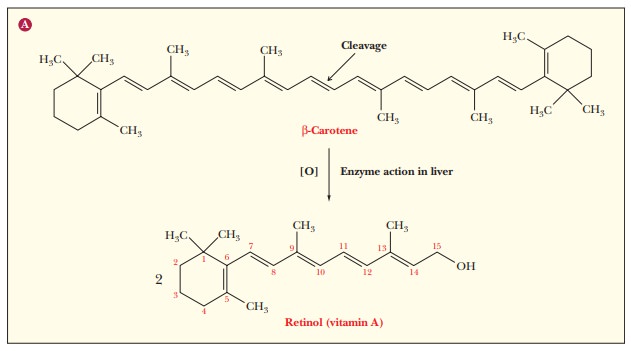 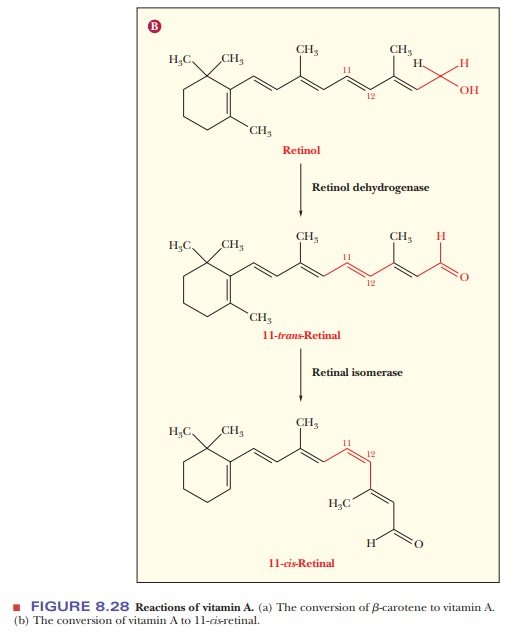 A derivative of vitamin A plays a crucial role in vision when it is bound to a protein called opsin. The cone cells in the retina of the eye contain several types of opsin and are responsible for vision in bright light and for color vision. The rod cells in the retina contain only one type of opsin; they are responsible for vision in dim light. The chemistry of vision has been more extensively studied in rod cells than in cone cells, and we shall discuss events that take place in rod cells.

Vitamin A has an alcohol group that is enzymatically oxidized to an aldehyde group, forming retinal (Figure 8.28b). Two isomeric forms of retinal, involving cis–trans isomerization around one of the double bonds, are important in thebehavior of this compound in vivo. The aldehyde group of retinal forms an imine (also called a Schiff base) with the side-chain amino group of a lysine residue in rod-cell opsin (Figure 8.29).

The product of the reaction between retinal and opsin is rhodopsin. The outer segment of rod cells contains flat membrane enclosed discs, the mem-brane consisting of about 60% rhodopsin and 40% lipid. (For more details about rhodopsin, see the following Biochemical Connections box.)

The several forms of vitamin D play a major role in the regulation of calcium and phosphorus metabolism. One of the most important of these compounds, vitamin D3 (cholecalciferol), is formed from cholesterol by the action of ultraviolet radiation from the Sun. Vitamin D3 is further processed in the body to form hydroxylated derivatives, which are the metabolically active form of this vitamin (Figure 8.30). The presence of vitamin D3 leads to increased synthesis of a Ca2+-binding protein, which increases the absorption of dietary calcium in the intestines. This process results in calcium uptake by the bones. 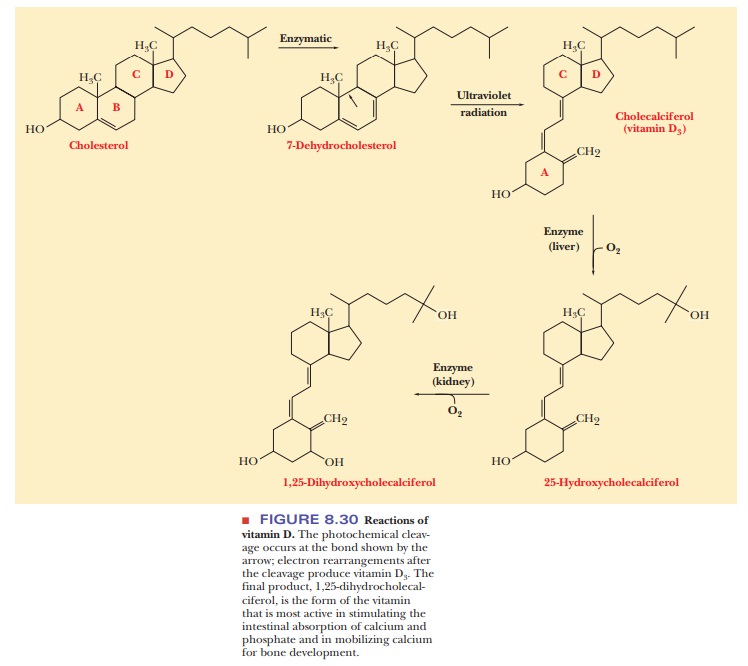 A deficiency of vitamin D can lead to rickets, a condition in which the bones of growing children become soft, resulting in skeletal deformities. Children, especially infants, have higher requirements for vitamin D than do adults. Milk with vitamin D supplements is available to most children. Adults who are exposed to normal amounts of sunlight do not usually require vitamin D supplements.

The most active form of vitamin E is α-tocopherol (Figure 8.31). In rats, vitamin E is required for reproduction and for prevention of the disease musculardystrophy. It is not known whether this requirement exists in humans. A well-established chemical property of vitamin E is that it is an antioxidant-that is, a good reducing agent-so it reacts with oxidizing agents before they can attack other biomolecules. The antioxidant action of vitamin E has been shown to protect important compounds, including vitamin A, from degradation in the laboratory; it probably also serves this function in organisms. 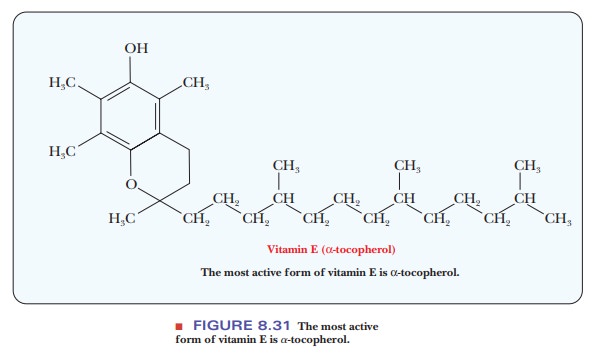 Recent research has shown that the interaction of vitamin E with membranes enhances its effectiveness as an antioxidant. Another function of antioxidants such as vitamin E is to react with, and thus to remove, the very reactive and highly dangerous substances known as free radicals. A free radical has at least one unpaired electron, which accounts for its high degree of reactivity. Free radicals may play a part in the development of cancer and in the aging process.

The name of vitamin K comes from the Danish Koagulation because this vitamin is an important factor in the blood-clotting process. The bicyclic ring system contains two carbonyl groups, the only polar groups on the molecule (Figure 8.32). A long unsaturated hydrocarbon side chain consists of repeating isoprene units, the number of which determines the exact form of vitamin K. Several forms of this vitamin can be found in a single organism, but the reason for this variation is not well understood. Vitamin K is not the first vitamin we have encountered that contains isoprene units, but it is the first one in which the number of isoprene units and their degree of saturation make a difference. (Can you pick out the isoprene-derived portions of the structures of vitamins A and E?) It is also known that the steroids are biosynthetically derived from isoprene units, but the structural relationship is not immediately obvious. 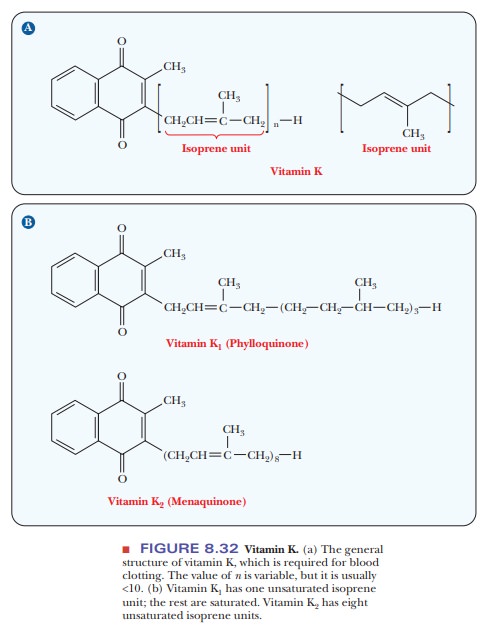 The presence of vitamin K is required in the complex process of blood clot-ting, which involves many steps and many proteins and has stimulated numer-ous unanswered questions. It is known definitely that vitamin K is required to modify prothrombin and other proteins involved in the clotting process. Specifically, with prothrombin, the addition of another carboxyl group alters the side chains of several glutamate residues of prothrombin. This modifica-tion of glutamate produces γ-carboxyglutamate residues (Figure 8.33). The two carboxyl groups in proximity form a bidentate (“two teeth”) ligand, which can bind calcium ion (Ca2+). 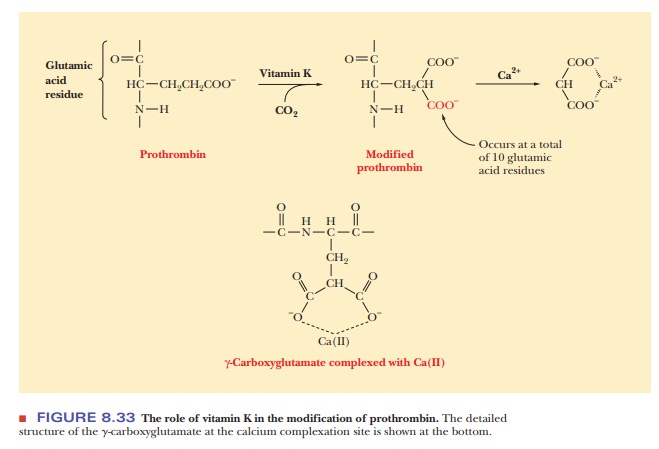 If prothrombin is not modified in this way, it does not bind Ca2+. Even though there is a lot more to be learned about blood clotting and the role of vitamin K in the process, this point, at least, is well established, because Ca2+ is required for blood clotting. (Two well-known anticoagulants, dicumarol and warfarin (a rat poison), are vitamin K antagonists.)

The structures of the lipid-soluble vitamins-A, D, E, and K-are ulti-mately derived from five-carbon isoprene units, which also play a role in lipid biosynthesis.

Vitamin A plays a crucial role in vision. Vitamin D is necessary for bone integrity because of its role in calcium and phosphorus metabolism. Vitamin E is an important antioxidant, and vitamin K plays a role in blood clotting.