The arrangement of the hydrocarbon interior of the bilayer can be ordered and rigid or disordered and fluid. The bilayer’s fluidity depends on its composition. 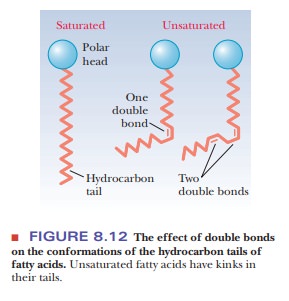 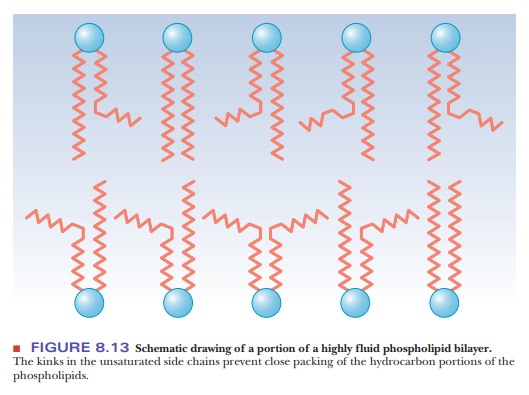 The presence of cholesterol may also enhance order and rigidity. The fused-ring structure of cholesterol is itself quite rigid, and the presence of cholesterol stabilizes the extended straight-chain arrangement of saturated fatty acids by van der Waals interactions (Figure 8.14). The lipid portion of a plant membrane has a higher percentage of unsaturated fatty acids, especially polyunsaturated (containing two or more double bonds) fatty acids, than does the lipid portion of an animal membrane. Furthermore, the presence of cho-lesterol is characteristic of animal, rather than plant, membranes. As a result, animal membranes are less fluid (more rigid) than plant membranes, and the membranes of prokaryotes, which contain no appreciable amounts of steroids, are the most fluid of all. Research suggests that plant sterols can act as natural cholesterol blockers, interfering with the uptake of dietary cholesterol. 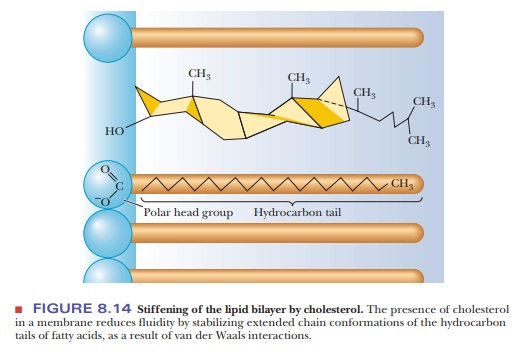 The transition temperature is higher for more rigid and ordered membranes than it is for relatively fluid and disordered membranes. The following Biochemical Connections box looks at some connections between the fatty acid composition of bilayers and mem-branes and how they behave at different temperatures. 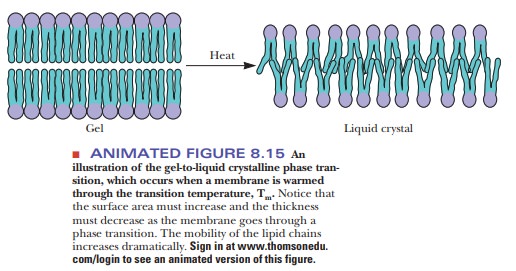 Recall that the distribution of lipids is not the same in the inner and outer portions of the bilayer. Because the bilayer is curved, the molecules of the inner layer are more tightly packed (refer to Figure 8.11). Bulkier molecules, such as cerebrosides, tend to be located in the outer layer. There is very little tendency for “flip-flop” migration of lipid molecules from one layer of the bilayer to another, but it does occur occasionally. Lateral motion of lipid molecules within one of the two layers frequently takes place, however, especially in more fluid bilayers. Several methods exist for monitoring the motions of molecules within a lipid bilayer. These methods depend on label-ing some part of the lipid component with an easily detected “tag.” The tags are usually fluorescent compounds, which can be detected with highly sensitive equipment. Another kind of labeling method depends on the fact that some nitrogen compounds have unpaired electrons. These compounds are used as labels and can be detected by magnetic measurements. 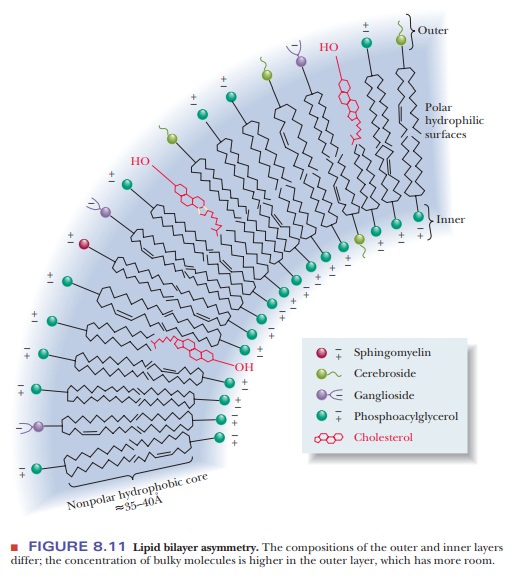 Study Material, Lecturing Notes, Assignment, Reference, Wiki description explanation, brief detail
Biochemistry: Lipids and Proteins Are Associated in Biological Membranes : How does the composition of the bilayer affect its properties? |