Glycerol is a simple compound that contains three hydroxyl groups (Figure8.2). When all three of the alcohol groups form ester linkages with fatty acids, the resulting compound is a triacylglycerol; an older name for this type of compound is triglyceride. Note that the three ester groups are the polar part of the molecule, whereas the tails of the fatty acids are nonpolar. It is usual for three different fatty acids to be esterified to the alcohol groups of the same glycerol molecule. Triacylglycerols do not occur as components of membranes (as do other types of lipids), but they accumulate in adipose tissue (primarily fat cells) and provide a means of storing fatty acids, particularly in animals. They serve as concentrated stores of metabolic energy. Complete oxidation of fats yields about 9 kcal g–1, in contrast with 4 kcal g–1 for carbohydrates and proteins. 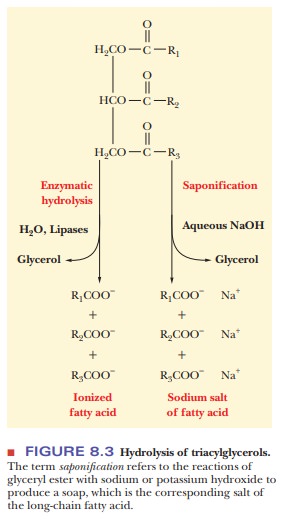 When an organism uses fatty acids, the ester linkages of triacylglycerols are hydrolyzed by enzymes called lipases. The same hydrolysis reaction can take place outside organisms, with acids or bases as catalysts. When a base such as sodium hydroxide or potassium hydroxide is used, the products of the reac-tion, which is called saponification (Figure 8.3), are glycerol and the sodium or potassium salts of the fatty acids. These salts are soaps. When soaps are used with hard water, the calcium and magnesium ions in the water react with the fatty acids to form a precipitate-the characteristic scum left on the insides of sinks and bathtubs. The other product of saponification, glycerol, is used in creams and lotions as well as in the manufacture of nitroglycerin.