The Functions of Biological Membranes

As already mentioned, three important functions take place in or on membranes (in addition to the structural role of membranes as the boundaries and con-tainers of all cells and of the organelles within eukaryotic cells).

The Functions of Membranes

As already mentioned, three important functions take place in or on membranes (in addition to the structural role of membranes as the boundaries and con-tainers of all cells and of the organelles within eukaryotic cells). The first of these functions is transport. Membranes are semipermeable barriers to the flow of substances into and out of cells and organelles. Transport through the membrane can involve the lipid bilayer as well as the membrane proteins. The other two important functions primarily involve the membrane proteins. One of these functions is catalysis. As we have seen, enzymes can be bound-in some cases very tightly-to membranes, and the enzymatic reaction takes place on the membrane. The third significant function is the receptor property, in which proteins bind specific biologically important substances that trigger biochemical responses in the cell. We shall discuss enzymes bound to membranes in subsequent. The other two functions we now consider in turn.

How does transport through membranes take place?

The process of passive transport can be subdivided into two categories-sim-ple diffusion and facilitated diffusion. In simple diffusion, a molecule moves directly through the membrane without interacting with another molecule. Small, uncharged molecules, such as O2, N2, and CO2, can pass through mem-branes via simple diffusion. The rate of movement through the membrane is controlled solely by the concentration difference across the membrane (Figure 8.21). Larger molecules (especially polar ones) and ions cannot pass through a membrane by simple diffusion. The process of moving a molecule passively through a membrane using a carrier protein, to which molecules bind, is called facilitated diffusion. A good example is the movement of glucose into erythro-cytes. The concentration of glucose in the blood is about 5 mM. The glucose concentration in the erythrocyte is less than 5 mM. Glucose passes through a carrier protein called glucose permease (Figure 8.22). This process is labeled as facilitated diffusion because no energy is expended and a protein carrier is used. In addition, facilitated diffusion is identified by the fact that the rate of transport, when plotted against the concentration of the molecule being transported, gives a hyperbolic curve similar to that seen in Michaelis–Menten enzyme kinetics (Figure 8.23). In a carrier protein, a pore is created by folding the backbone and side chains. Many of these proteins have several α-helical portions that span the membrane; in others, a β-barrel forms the pore. In one example, the helical portion of the protein spans the membrane. The exterior, which is in contact with the lipid bilayer, is hydrophobic, whereas the interior, through which ions pass, is hydrophilic. Note that this orientation is the inverse of that observed in water-soluble globular proteins. 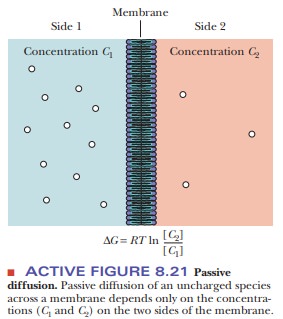 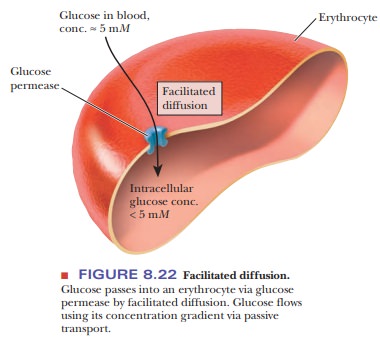 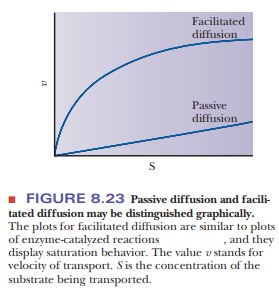 Active transport requires moving substances against a concentration gradi-ent. It is identified by the presence of a carrier protein and the need for an energy source to move solutes against a gradient. In primary active transport, the movement of molecules against a gradient is directly linked to the hydroly-sis of a high-energy molecule, such as ATP. The situation is so markedly similar to pumping water uphill that one of the most extensively studied examples of active transport, moving potassium ions into a cell and simultaneously moving sodium ions out of the cell, is referred to as the sodium–potassium ion pump (or Na+/K+ pump).

The Na+/K+ pump operates in several steps (Figure 8.24). One subunit of the protein hydrolyzes the ATP and transfers the phosphate group to an aspartate side chain on another subunit (step 1). 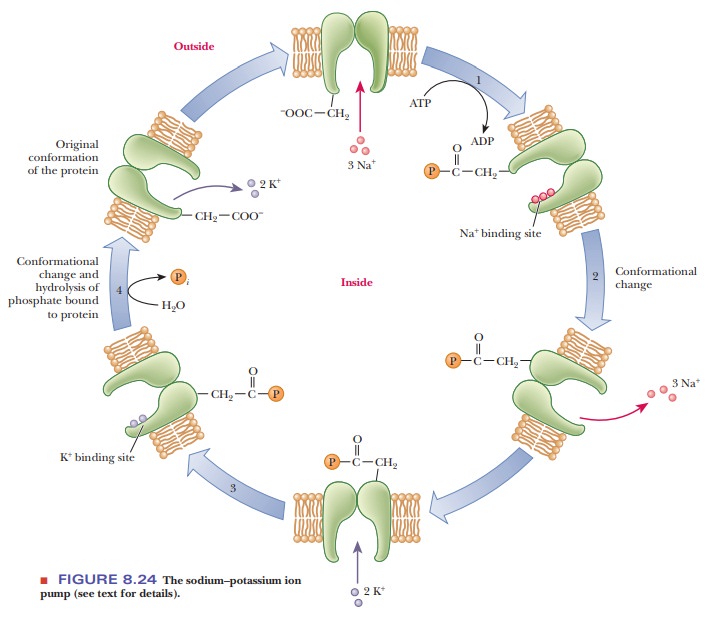 (The bond formed here is a mixed anhydride;) Simultaneously, binding of three Na+ ions from the interior of the cell takes place. The phosphorylation of one subunit causes a conformational change in the protein, which opens a channel or pore through which the three Na+ ions can be released to the extracellular fluid (step 2). Outside the cell, two K+ ions bind to the pump enzyme, which is still phosphory-lated (step 3). Another conformational change occurs when the bond between the enzyme and the phosphate group is hydrolyzed. This second conformation-al change regenerates the original form of the enzyme and allows the two K+ ions to enter the cell (step 4). The pumping process transports three Na+ ions out of the cell for every two K+ ions transported into the cell (Figure 8.25). 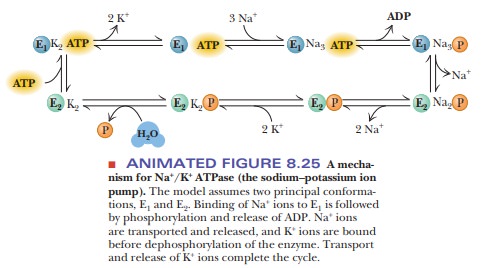 The operation of the pump can be reversed when there is no K+ and a high concentration of Na+ in the extracellular medium; in this case, ATP is produced by the phosphorylation of ADP. The actual operation of the Na+/K+ pump is not completely understood and probably is even more complicated than we now know. There is also a calcium ion (Ca2+) pump, which is a sub-ject of equally active investigation. Unanswered questions about the detailed mechanism of active transport provide opportunities for future research.

Another type of transport is called secondary active transport. An example is the galactoside permease in bacteria (Figure 8.26). The lactose concentra-tion inside the bacterial cell is higher than the concentration outside, so mov-ing lactose into the cell requires energy. The galactoside permease does not directly hydrolyze ATP, however. Instead, it harnesses the energy by letting hydrogen ions flow through the permease into the cell with their concentration gradient. As long as more energy is available allowing the hydrogen ions to flow (–DG) than is required to concentrate the lactose (+DG), the process is possi-ble. 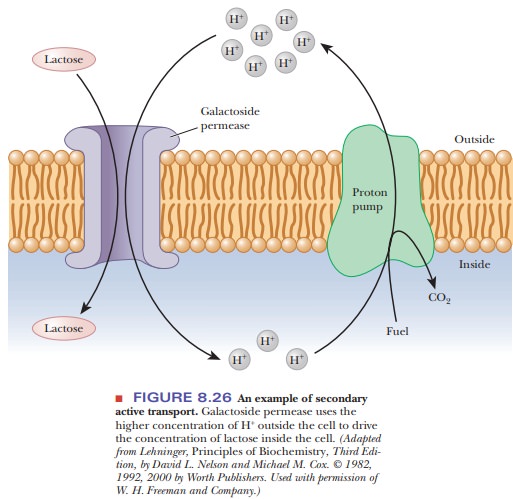 How do membrane receptors work?

The first step in producing the effects of some biologically active substances is binding the substance to a protein receptor site on the exterior of the cell. The interaction between receptor proteins and the active substances that bind to them has features in common with enzyme–substrate recognition. There is a requirement for essential functional groups that have the correct three-dimensional conformation with respect to each other. The binding site, whether on a receptor or an enzyme, must provide a good fit for the substrate. In receptor binding, as in enzyme behavior, inhibition of the action of the protein by some sort of “poison” or inhibitor is possible. The study of receptor proteins is less advanced than the study of enzymes because many receptors are tightly bound integral proteins, and their activity depends on the membrane environment. Receptors are often large oligomeric proteins (ones with several subunits), with molecular weights on the order of hundreds of thousands. Also, quite frequently, the receptor has very few molecules in each cell, adding to the difficulties of isolating and studying this type of protein.

An important type of receptor is that for low-density lipoprotein (LDL), the principal carrier of cholesterol in the bloodstream. LDL is a particle that consists of various lipids-in particular, cholesterol and phosphoglycerides-as well as a protein. The protein portion of the LDL particle binds to the LDL receptor of a cell. The complex formed between the LDL and the receptor is pinched off into the cell in a process called endocytosis. The receptor protein is then recycled back to the surface of the cell (Figure 8.27). The cholesterol portion of the LDL is used in the cell, but an oversupply of cholesterol causes problems. 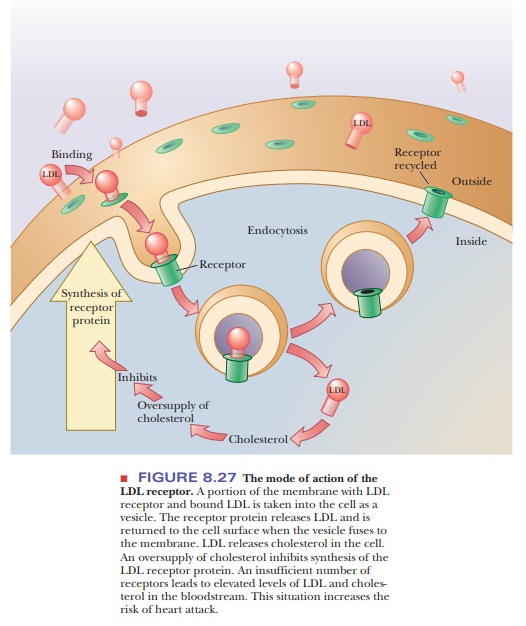 Molecules are transported across cell membranes in several ways, and proteins play a role in most of them.

In active transport, energy is required, either directly or indirectly. Large membrane proteins play a key role in the process.

Proteins serve as receptors for substances that bind to cell surfaces.