Lipid Droplets Are Not Just Great Balls of Fat

The photo seen earlier shows an electron micrograph of a fat cell.

Lipid Droplets Are Not Just Great Balls of Fat

The photo seen earlier shows an electron micrograph of a fat cell. Very visible are the large lipid droplets. For decades these structures have been thought of as great balls of fat, a convenient way to store triacylglycerols for consumption. However, these droplets are surrounded by a thin phospholipid membrane that contain many membrane proteins with wide varying activities. On the negative side, they may also be involved in several lipid diseases, cardiovascular diseases, and diabetes. These lipid droplets are now being thought of as a subcellular organelle in their own right.

It is now believed that perilipin guards the fat resources of the lipid droplet. When not phosphorylated, the protein does not allow fat-digesting enzymes access to the triacylglycerols. When phosphorylated, the protein shifts conformation and allows access. Studies with mutant mice lacking perilipin have shown that such mice eat much more than their wild-type counterparts, yet burn off two-thirds of the extra calories consumed. The figure shows three different strains of mice. The mouse on the left is normal. The mouse on the right is an obese mouse from a strain that lacks the ability to respond to an appetite suppress-ing hormone called leptin. The mouse in the middle is a double mutant that cannot respond to leptin but also lacks perilipin. In this case the extra fat burning that takes place almost makes up for the increased appetite. Further research on such proteins in the membranes of lipid droplets could lead to useful antiobesity therapies. 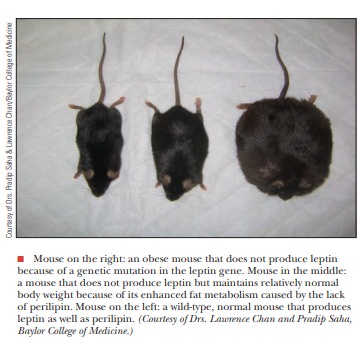