Phospholipids are compound lipids containing phosphoric acid in addition to fatty acid, alcohol and a nitrogenous base.

Phospholipids are compound lipids containing phosphoric acid in addition to fatty acid, alcohol and a nitrogenous base.

Phospholipids are classified into two types.

1.        Glycerophospholipids (or) Phosphoglycerides that contain glycerol as alcohol.

2.        Sphingophospholipids that contain sphingosine as alcohol.

These are the major lipids that occur in biological membranes. They present in all plant and animal cells. They are abundantly present in heart, brain, kidney, egg yolk and soyabean. The important glycerophospholipids are lecithin, cephalin, phosphotidyl inositol, cardiolipin and plasmalogen. 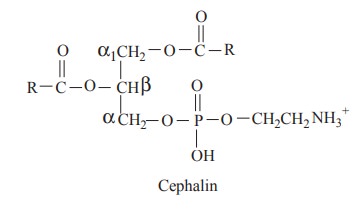 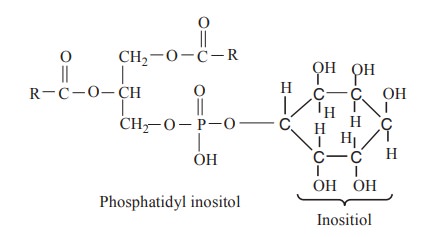 Plasmalogens posses an ether link in a1 position instead of ester link. The alkyl radical is an unsaturated alcohol and they are found in brain and nervous tissue

These are present in plasma membrane and myelin sheath. They are amphipathic lipids having polar head and non-polar tail. They contain an amino alcohol called shingosine. It is attached to a fatty acid by an amide linkage to form ceramide. Ceramide is linked to phosphoryl choline to form sphingomyelin, which is an important member of sphingophospholipids. 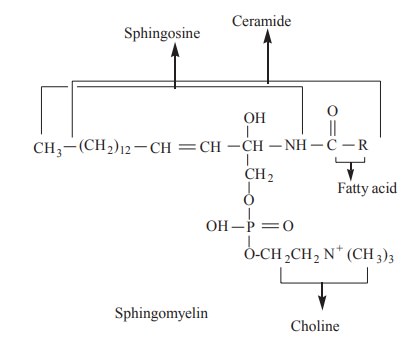 ·           Glycerophospholipids are white waxy substances, which become dark when exposed to air and light, owing to autoxidation and decomposition. This is due to the presence of unsaturated fatty acids in the molecules.

·           They are soluble in alcohol and other fat solvents except in acetone.

·           They are hygroscopic and mix well with water to form cloudy, colloidal and slimy solutions.

·           They donot have definite melting point and decompose when heated.

·           They are readily hydrolysed by boiling with acids and alkalies to their constituents.

·           They are hydrolysed by enzyme phospholipase to various components. 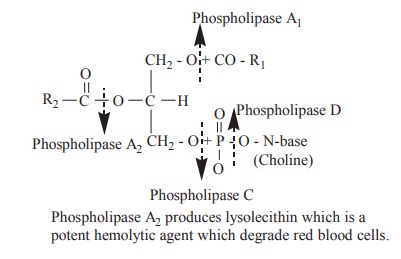 ·           They form the structural components of membrane and regulate membrane permeability.

·           They are essential components of bile where they act as detergents and help in the solubilisation of cholesterol.

·           They protect and insulate the neuronal fibres of myelin sheath.

·           They are involved in the interaction of hormones with receptors.

·           They can act as lipotropic agents and prevent fatty liver formation.