Arab mathematician Abraham bar Hiyya Ha-Nasi, often known by the Latin name Savasorda, is famed for his book ‘Liber Embadorum’ published in 1145 AD(CE) which is the first book published in Europe to give the complete solution of a quadratic equation.

For a period of more than three thousand years beginning from early civilizations to current times, humanity knew how to solve a general quadratic equation in terms of its co-efficients by using four arithmetical operations and extraction of roots. This process is called “Solving by Radicals”. Huge amount of research has been carried to this day in solving various types of equations.

In particular an expression of degree 2 is called a Quadratic Expression which is expressed as p(x) = ax 2 +bx +c, a ≠0 and a, b, c are real numbers.

1. Zeroes of a Quadratic Polynomial 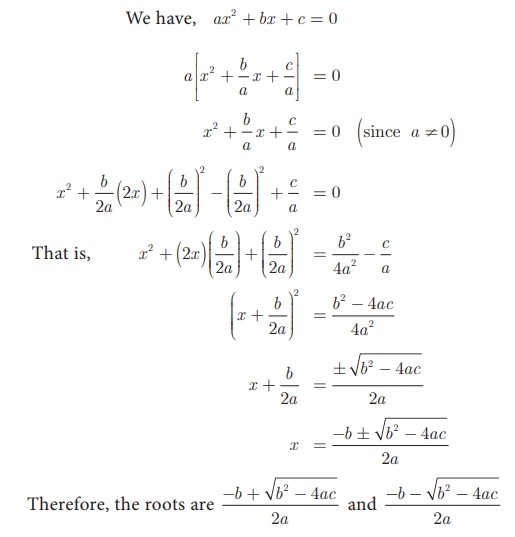 3. Formation of a Quadratic Equation

That is, x2 - (sum of roots) x  + product of roots = 0 is the general form of the quadratic equation when the roots are given.

Write down the quadratic equation in general form for which sum and product of the roots are given below.

Find the sum and product of the roots for each of the following quadratic equations :