Algebra can be thought of as the next level of study of numbers. If we need to determine anything subject to certain specific conditions, then we need Algebra. In that sense, the study of Algebra is considered as “Science of determining unknowns”. During third century AD(CE) Diophantus of Alexandria wrote a monumental book titled “Arithmetica” in thirteen volumes of which only six has survived. This book is the first source where the conditions of the problems are stated as equations and they are eventually solved. Diophantus realized that for many real life situation problems, the variables considered are usually positive integers.

The term “Algebra” has evolved as a misspelling of the word ‘al-jabr’ from one of the important work titled Al-Kitāb al-mukhtaşar fī hisāb al-jabr wa’l-muqābala (“The Compendious Book on Calculation by Completion and Balancing”) written by Persian Mathematician Al-Khwarizmi of 9th Century AD(CE) Since Al-Khwarizmi’s Al-Jabr book provided the most appropriate methods of solving equations, he is hailed as “Father of Algebra”.

In the earlier classes, we had studied several important concepts in Algebra. In this class, we will continue our journey to understand other important concepts which will be of much help in solving problems of greater scope. Real understanding of these ideas will benefit much in learning higher mathematics in future classes.

Let us recall solving a pair of linear equations in two variables.

Note that linear equations are first degree equations in the given variables.

·           A linear equation in two variables represent a straight line in xy plane. 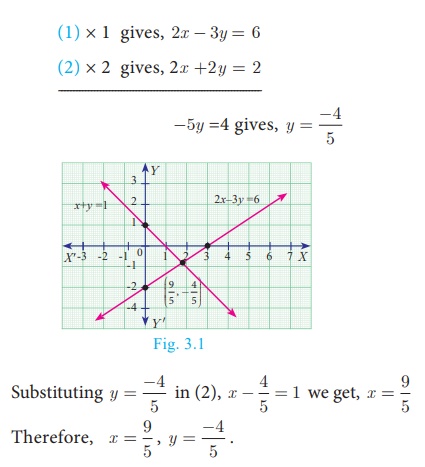