A p-n junction is formed by joining n-type and p-type semiconductor materials as shown in Figure 9.9(a). Since the n-region has a high electron concentration and the p-region a high hole concentration, electrons diffuse from the n-side to the p-side. This causes diffusion current which exists due to the concentration difference of electrons. The electrons diffusing into the p-region may occupy holes in that region and make it negative. The holes left behind by these electrons in the n-side are equivalent to the diffusion of holes from the p-side to the n-side. If the electrons and holes were not charged, this diffusion process would continue until the concentration of electrons and holes on the two sides were the same, as happens if two gasses come into contact with each other. 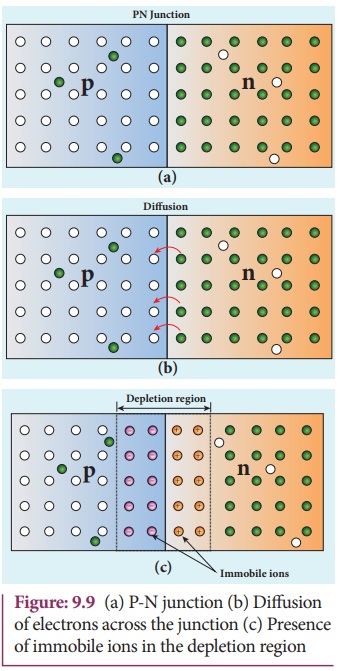 But, in a p-n junction, when the electrons and holes move to the other side of the junction, they leave behind exposed charges on dopant atom sites, which are fixed in the crystal lattice and are unable to move. On the n-side, positive ion cores are exposed and on the p- side, negative ion cores are exposed as shown in Figure 9.9(b). An electric field E forms between the positive ion cores in the n-type material and negative ion cores in the p-type material. The electric field sweeps free carriers out of this region and hence it is called depletion region as it is depleted of free carriers. A barrier potential Vb due to the electric field E is formed at the junction as shown in Figure 9.9(c).

The recombination of charge carriers takes place only to a certain point beyond which the depletion layer acts like a barrier to further diffusion of free charges across the junction.

This is due to the fact that the immobile ions on both sides establish an electric potential difference across the junction. Therefore, an electron trying to diffuse into the interior of the depletion region encounters a negative wall of ions repelling it backwards. If the free electron has enough energy, it can break through the wall and enter into the p-region, where it can recombine with a hole and create another negative ion. 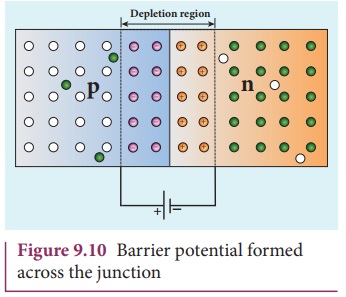