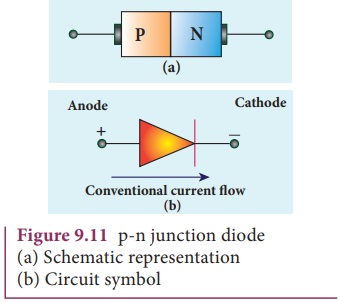 Biasing means providing external energy to charge carriers to overcome the barrier potential and make them move in a particular direction. The charge carriers can either move towards the junction or away from the junction. The external voltage applied to the p-n junction is called bias voltage. Depending on the polarity of the external source to the p-n junction we have two types of biasing

If the positive terminal of the external voltage source is connected to the p-side and the negative terminal to the n-side, it is called forward biased as shown in Figure 9.12. The application of a forward bias potential makes the electrons move into the n-side and the holes into the p-side. This initiates the recombination with the ions near the junction which in turn reduces the width of the depletion region and hence the barrier potential. 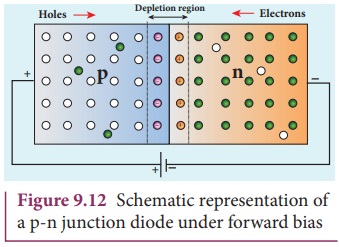 If the positive terminal of the battery is connected to the n-side and the negative potential to the p-side, the junction is said to be reverse biased as shown in Figure 9.13. 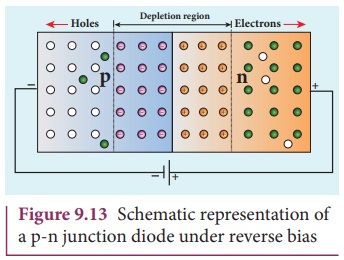 As the positive potential is connected to the n-type material, the electrons in the n-type material are attracted towards the positive terminal in turn, the holes in the p-type material move towards the negative terminal (both away from the junction). It increases the immobile ions at the junction. The net effect is the widening of the depletion region. This leads to an increase in the barrier potential. Consequently, the majority charge carriers from both sides experience a great barrier to cross the junction. This reduces the diffusion current across the junction effectively.

The reverse saturation current of a silicon diode doubles for every 10 Â°C rise in temperature.