Different trends in the embedded industry related to:

This concluding chapter describes the trends in the embedded systems industry.

There have been tremendous advancements in the area of processor design.

Following are some of the points of difference between the first generation of processor/controller and today’s processor/ controller.

Need for individual components: Early processors need different components like brown out circuit, timers, DAC/ADC separately interfaced if required to be used in the circuit. Today’s processors have all these components on the same chip as the processor.

Speed of Execution: Early processors were slow in terms of number of instructions executed per second. Today’s processor with advanced architecture support features like instruction pipeline improving the execution speed.

Clock frequency: Early processors could execute at a frequency of a few MHz only. Today’s processors are capable of achieving execution frequency in rage of GHz.

O Application specific processor: Early systems were designed using the processors available at that time. Today it is possible to custom create a processor according to a product requirement.

Following are the major trends in processor architecture in embedded development.

This concept makes it possible to integrate almost all functional systems required to build an embedded product into a single chip.

SoC integrate multiple functional components on the same chip thereby saving board space which helps to miniaturize the overall design.

This concept employs multiple cores on the same processor chip operating at the same clock frequency and battery.

Based on the number of cores, these processors are known as:

These processors implement multiprocessing concept where each core implements pipelining and multithreading.

It is a processor with reconfigurable hardware features.

These processors contain an Array of Programming Elements (PE) along with a microprocessor. The PE can be used as a computational engine like ALU or a memory element.

The advancements in processor technology have caused a major change in the Embedded Operating System Industry.

There are lots of options for embedded operating system to select from which can be both commercial and proprietary or Open Source.

Virtualization concept is brought in picture in the embedded OS industry which replaces the monolithic architecture with the microkernel architecture.

This enables only essential services to be contained in the kernel and the rest are installed as services in the user space as is done in Mobile phones.

Off the shelf OS customized for specific device requirements are now becoming a major trend.

It is the application that is responsible for execution of embedded system.

It is the software that performs low level hardware interaction, memory management etc on the embedded system.

It is the software that runs on the host computer and is responsible for interfacing with the embedded system.

It is the user application that executes on top of the embedded system on a host computer.

Java is not a popular language for embedded systems development due to its nature of execution.

Java programs are compiled by a compiler into bytecode. This bytecode is then converted by the JVM into processor specific object code.

During runtime, this interpretation of the bytecode by the JVM makes java applications slower that other cross compiled applications.

This disadvantage is overcome by providing in built hardware support for java bytecode execution. 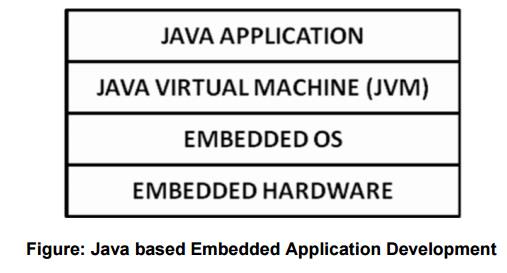 Another technique used to speed up execution of java bytecode is using Just In Time (JIT) compiler. It speeds up the program execution by caching all previously executed instruction.

Following are some of the disadvantage of Java in Embedded Systems development:

Garbage collector of Java is non-deterministic in behavior which makes it not suitable for hard real time systems.

o Processors need to have a built in version of JVM

Those processors that don’t have JVM require it to be ported for the specific processor architecture.

Runtime memory requirement of JAVA is high which is not affordable by embedded systems.

It stands for .NET Compact Framework.

.NET CF is a replacement of the original .NET framework to be used on embedded systems.

The CF version is customized to contain all the necessary components for application development.

The Original version of .NET Framework is very large and hence not a good choice for embedded development.

The .NET Framework is a collection of precompiled libraries.

For execution, the CIL is converted to target specific machine instructions by CLR.

Following are some of the popular strategic alliances, open source standards and frameworks specific to the mobile handset industry.

It is a standard body for creating open standards for mobile industry.

OMA was formed in June 2002 by the world’s leading mobile operators, device and network suppliers, information technology companies and content and service providers.

OMA delivers open specifications for creating interoperable services that work across all geographical boundaries, on any bearer network. OMA’s specifications support the billions of new and existing fixed and mobile terminals across a variety of mobile networks, including traditional cellular operator networks and emerging networks supporting machine-to-machine device communication.

OMA is the focal point for the development of mobile service enabler specifications, which support the creation of interoperable end-to-end mobile services.

Be the catalyst for the consolidation of standards activity within the mobile data service industry; working in conjunction with other existing standards organizations and industry fora to improve interoperability and decrease operational costs for all involved.

providers, information technology providers, mobile operators and wireless vendors such that they elect to actively participate in the organization.

The Open Handset Alliance is a group of 84 technology and mobile companies who have come together to accelerate innovation in mobile and offer consumers a richer, less expensive, and better mobile experience. Together they have developed Android™, the first complete, open, and free mobile platform and are committed to commercially deploy handsets and services using the Android Platform.

Android is an operating system based on the Linux kernel, and designed primarily for touchscreen mobile devices such as smartphones and tablet computers.

Initially developed by Android, Inc., which Google supported financially and later bought in 2005, Android was unveiled in 2007 along with the founding of the Open Handset Alliance: a consortium of hardware, software, and telecommunication companies devoted to advancing open standards for mobile devices.

Openmoko is a project to create a family of open source mobile phones, including the hardware specification and the operating system.

The second sub-project is developing hardware devices on which Openmoko Linux runs.

Following are some of the problems faced by the embedded devices industry:

Lack of Standards/ Conformance to standards

Standards in the embedded industry are followed only in certain handful areas like Mobile handsets.

There is growing trend of proprietary architecture and design in other areas.

Most important aspect in the development of embedded system is availability of skilled labor. There may be thousands of developers who know how to code in C, C++, Java or .NET but very few in embedded software.