The MC68020 was launched in April 1984 as the ‘32 bit performance standard’ and in those days its performance was simply staggering — 8 million instructions per second peak with 2–3 million sustained when running at 16 MHz clock speed.

The MC68020 was launched in April 1984 as the ‘32 bit performance standard’ and in those days its performance was simply staggering — 8 million instructions per second peak with 2–3 million sustained when running at 16 MHz clock speed. It was a true 32 bit processor with 32 bit wide external data and address buses as shown. It supported all the features and functions of the MC68000 and MC68010, and it executed M68000 USER binary code without modification (but faster!). 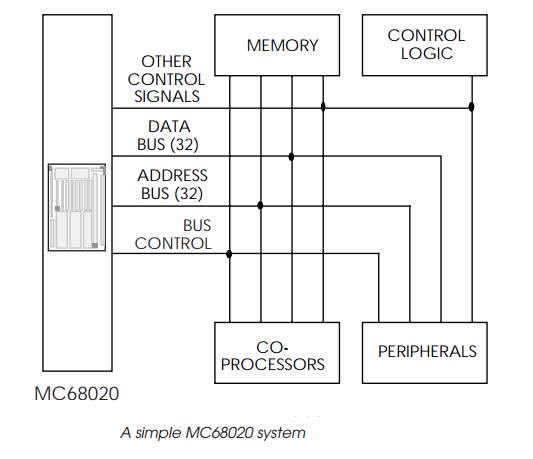 The actual pipeline used within the design is quite sophis-ticated. It is a four–stage pipe with stage A consisting of an instruction router which accepts data from either the external bus controller or the internal cache. As the instruction is processed down the pipeline, the intermediate data can either cause micro and nanocode sequences to be generated to control the execution unit or, in the case of simpler instructions, the data itself can be passed directly into the execution unit with the subsequent speed improvements.

The programmer’s USER model is exactly the same as for the MC68000, MC68010 and MC68008. It has the same eight data and eight address 32 bit register organisation. The SUPERVISOR mode is a superset of its predecessors. It has all the registers found in its predecessors plus another three. Two registers are associated with controlling the instruction cache, while the third provides the master stack pointer. 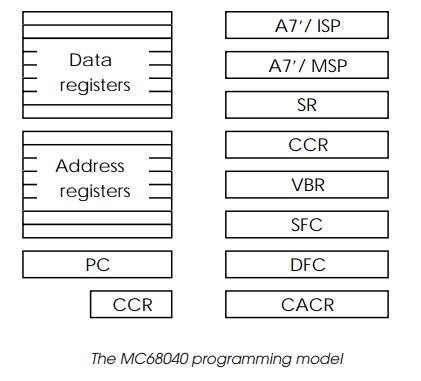 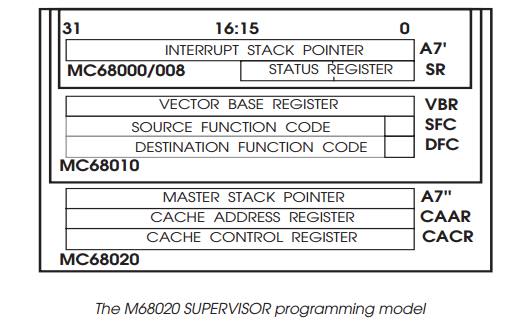 The MC68020 instruction set is a superset of the MC68000/ MC68010 sets. The main difference is the inclusion of floating point and coprocessor instructions, together with a set to manipu-late bit field data. The instructions to perform a trap on condition operation, a compare and swap operation and a ‘call-return from module’ structure were also included. Other differences were the addition of 32 bit displacements for the LINK and Bcc (branch on condition) instructions, full 32 bit arithmetic with 32 or 64 bit results as appropriate and extended bounds checking for the CHK (check) and CMP (compare) instructions.

The bit field instructions were included to provide addi-tional support for applications where data does not conveniently fall into a byte organisation. Telecommunications and graphics both manipulate data in odd sizes — serial data can often be 5, 6 or 7 bits in size and graphics pixels (i.e. each individual dot that makes a picture on a display) vary in size, depending on how many colours, grey scales or attributes are being depicted. 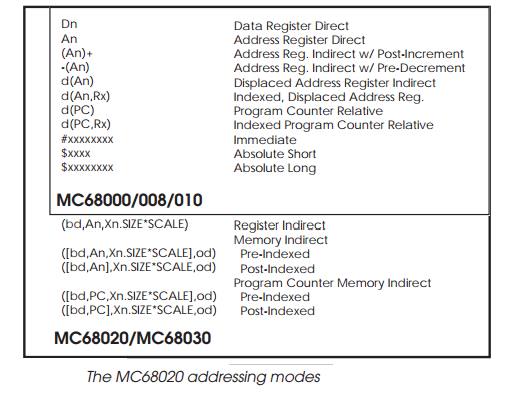 The addressing modes were extended from the basic M68000 modes, with memory indirection and scaling. Memory indirec-tion allowed the contents of a memory location to be used within an effective address calculation rather than its absolute address. The scaling was a simple multiplier value 1, 2, 4 or 8 in magnitude, which multiplied (scaled) an index register. This allowed large data elements within data structures to be easily accessed without having to perform the scaling calculations prior to the access. These new modes were so complex that even the differentiation between data and address registers was greatly reduced: with the MC68020, it is possible to use data registers as additional address registers. In practice, there are over 50 variations available to the programmer to apply to the 16 registers.

The new CAS and CAS2 ‘compare and swap’ instructions provided an elegant solution to linked list updating within a multiprocessor system. A linked list is a series of data lists linked together by storing the address of the next list in the chain in the preceding chain. To add or delete a list simply involves modifying these addresses. 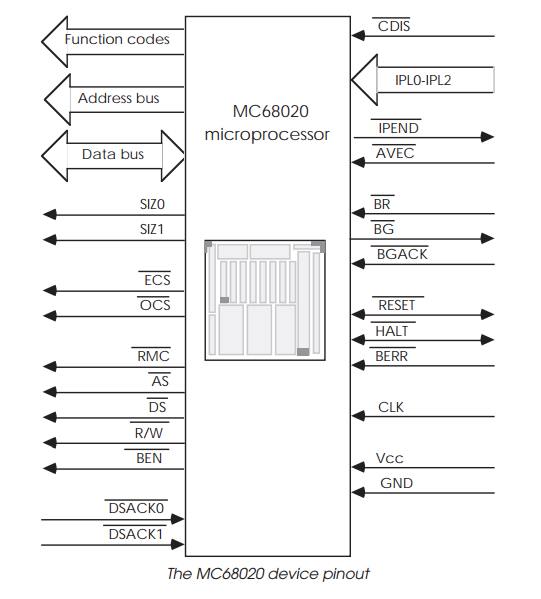 In a multiprocessor system, this modification procedure must occur uninterrupted to prevent corruption. The CAS and CAS2 instruction meets this specification. The current pointer to the next list is read and stored in Dn. The new value is calculated and stored in Dm. The CAS instruction is then executed. The current pointer value is read and compared with Dn. If they are the same, no other updating by another processor has happened and Dm is written out to update the list. If they do not match, the value is copied into Dn, ready for a repeat run. This sequence is per-formed using an indivisible read-modify-write cycle. The condi-tion codes are updated during each stage. The CAS2 instruction performs a similar function but with two sets of values. This instruction is also performed as a series of indivisible cycles but with different addresses appearing during the execution.

Many of the signals shown in the pin out diagram are the same as those of the MC68000 — the function codes FC0–2, interrupt pins IPL0–2 and the bus request pins, RESET*, HALT* and BERR* perform the same functions.

With the disappearance of the M6800 style interface, sepa-rate signals are used to indicate an auto-vectored interrupt. The AVEC* signal is used for this function and can be permanently asserted if only auto-vectored interrupts are required. The IPEND signal indicates when an interrupt has been internally recognised and awaits an acknowledgement cycle. RMC* indicates an indi-visible read-modify-write cycle instead of simply leaving AS* asserted between the bus cycles. The address strobe is always released at the end of a cycle. ECS* and OCS* provide an early warning of an impending bus cycle, and indicate when valid address information is present on the bus prior to validation by the address strobe. 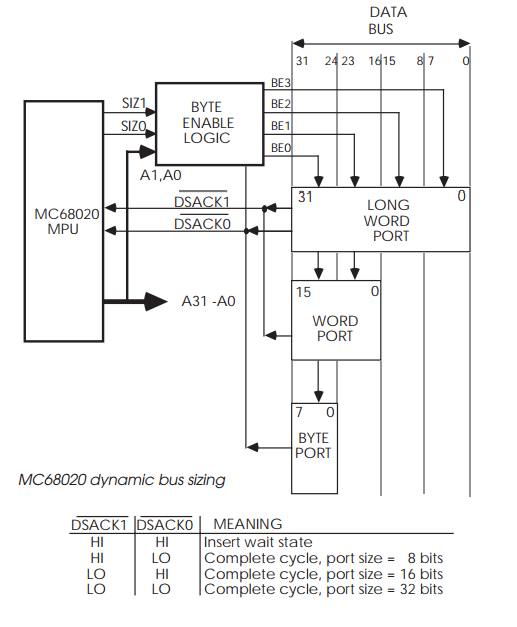 The M68000 upper and lower data strobes have been re-placed by A0 and the two size pins, SIZE0 and SIZE1. These indicate the amount of data left to transfer on the current bus cycle and, when used with address bits A0 and A1, can provide decode information so that the correct bytes within the 4 byte wide data bus can be enabled. The old DTACK* signal has been replaced by two new ones, DSACK0* and DSACK1*. They provide the old DTACK* function of indicating a successful bus cycle and are used in the dynamic bus sizing. The bus interface is asynchronous and similar to the M68000 cycle but with a shorter three–cycle se-quence, as shown. 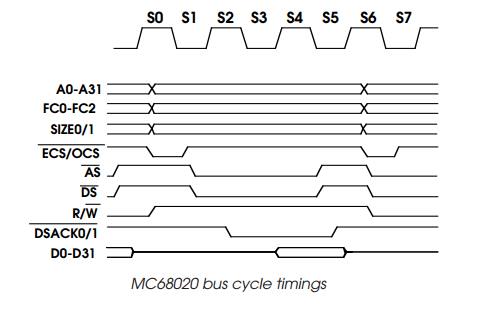