The Intel 80486 processor is essentially an enhanced 80386. It has a similar instruction set and register model but to dismiss it as simply a go-faster 80386 would be ignoring the other features that it uses to improve performance.

The Intel 80486 processor is essentially an enhanced 80386. It has a similar instruction set and register model but to dismiss it as simply a go-faster 80386 would be ignoring the other features that it uses to improve performance. 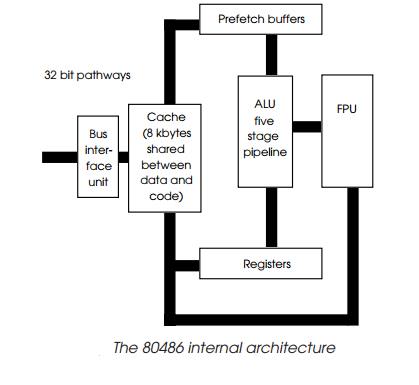 Like the MC68040, it is a CISC processor that can execute instructions in a single cycle. This is done by pipelining the instruction flow so that address calculations and so on are per-formed as the instruction proceeds down the line. Although the pipeline may take several cycles, an instruction can potentially be started and completed on every clock edge, thus achieving the single cycle performance.

To provide instruction and data to the pipeline, the 80486 has an internal unified cache to contain both data and instructions.

This removes the dependency of the processor on faster external memory to maintain sufficient data flow to allow the processor to continue executing instead of stalling. The 80486 also integrates a 80387 compatible fast floating point unit and thus does not need an external coprocessor.

The instruction set is essentially the same as the 80386 but there are some additional instructions available when running in protected mode to control the memory management and floating point units.

The 80486 is available in several different versions which offer different facilities. The 486SX is like the 80386SX, a stripped down version of the full DX processor with the floating point unit removed but with the normal 32 bit external data and address buses. The DX2 versions are the clock doubled versions which run the internal processor at twice the external bus speed. This allows a 50 MHz DX2 processor to work in a 25 MHz board design, and opens the way to retrospective upgrades — known as the over-drive philosophy — where a user simply replaces a 25 MHz 486SX with a DX to get floating point support or a DX2 to get the FPU and theoretically twice the performance. Such upgrades need to be carefully considered: removing devices that do not have a zero insertion force socket can be tricky at best and wreck the board at worst. Similarly, the additional heat and power dissipation has also to be taken into consideration. While some early PC designs had difficulties in these areas, the overdrive option has now become a standard PC option.

The DX2 typically gives about 1.6 to 1.8 performance im-provement depending on the operations that are being carried out. Internal processing gains the most from the DX2 approach while memory-intensive operations are frequently limited by the external board design. Intel have also released a DX4 version which offers internal CPU speeds of 75 and 100 MHz.

For embedded system designers, these overdrive chips can be a gift from heaven in that they allow the hardware performance of a system to be upgraded by simply swapping the processor. As the speed clocking is an internal operation, the external hardware timing can remain as is without affecting the design. It should be stated that getting the performance budget right in the first place is always preferable, but having the option of getting more per-formance without changing the complete hardware is always useful as a backup plan. It should be remembered that this solution will only address CPU performance issues and not prob-lems caused by external memory access delays or I/O speed problems. This approach can be used with many other processors where a pin compatible but faster CPU is available.