The MC68030 appeared some 2–3 years after the MC68020 and used the advantage of increased silicon real estate to integrate more functions on to a MC68020-based design.

The MC68030 appeared some 2–3 years after the MC68020 and used the advantage of increased silicon real estate to integrate more functions on to a MC68020-based design. The differences between the MC68020 and the MC68030 are not radical — the newer design can be referred to as evolutionary rather than a quantum leap. The device is fully MC68020 compatible with its full instruction set, addressing modes and 32 bit wide register set. The initial clock frequency was designed to 20 MHz, some 4 MHz faster than the MC68020, and this has yielded commercially available parts running at 50 MHz. The transistor count has increased to about 300000 but with smaller geometries; die size and heat dissipation are similar.

Memory management has now been brought on-chip with the MC68030 using a subset of the MC68851 PMMU with a smaller 22 entry on-chip address translation cache. The 256 byte instruc-tion cache of the MC68020 is still present and has been augmented with a 256 byte data cache.

Both these caches are logical and are organised differently from the 64 × 4 MC68020 scheme. A 16 × 16 organisation has been adopted to allow a new synchronous bus to burst fill cache lines. The cache lookup and address translations occur in parallel to improve performance. 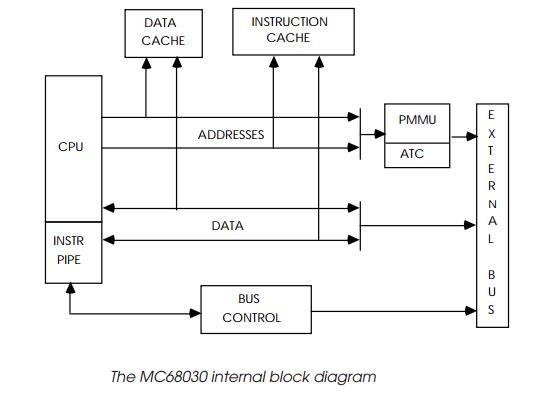 The processor supports both the coprocessor interface and the MC68020 asynchronous bus with its dynamic bus sizing and misalignment support. However, it has an alternative synchro-nous bus interface which supports a two–clock access with op-tional single-cycle bursting. The bus interface choice can be made dynamically by external hardware.