The Z80 microprocessor is an 8 bit CPU with a 16 bit address bus capable of direct access to 64k of memory space. It was designed by Zilog and rapidly gained a lot of interest.

The Z80 microprocessor is an 8 bit CPU with a 16 bit address bus capable of direct access to 64k of memory space. It was designed by Zilog and rapidly gained a lot of interest. The Z80 was based on the Intel 8080 but has an extended instruction set and many hardware improvements. It can run 8080 code if needed by its support of the 8080 instruction set. The instruction set is essential based around an 8 bit op code giving a maximum of 256 instructions. The 158 instructions that are specified — the others are reserved — include 78 instructions from the 8080. The instruc-tion set supports the use of extension bytes to encode additional information. In terms of processing power, it offered about 1 MIP at 4 MHz clock speed with a minimum instruction time of 1 µs and a maximum instruction time of 5.75 µs. 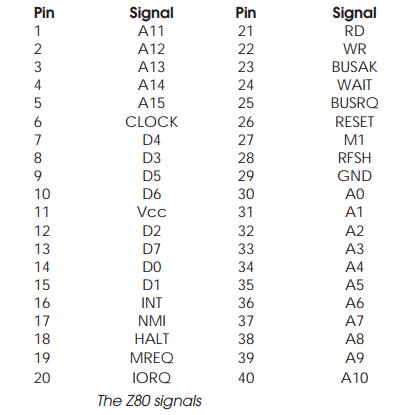 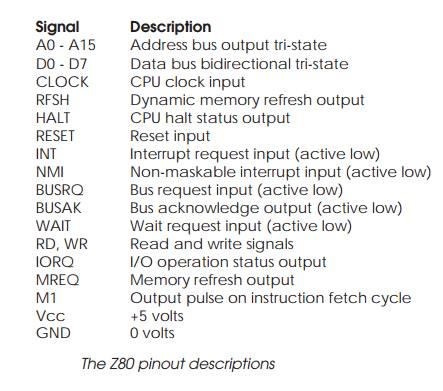 The programming model includes an accumulator and six 8 bit registers that can be paired together to create three 16 bit registers. In addition to the general registers, a stack pointer, program counter, and two index (memory pointers) registers are provided. It uses external RAM for its stack. While not as powerful today as a PowerPC or Pentium, it was in its time a very powerful processor and was used in many of the early home computers such as the Amstrad CPC series. It was also used in many embedded designs partly because of its improved performance and also for its built-in refresh circuitry for DRAMs. This circuitry greatly simplified the external glue logic that was needed with DRAMs.

The Z80 was originally packaged in a 40 pin DIP package and ran at 2.5 and 4 MHz. Since then other packages and speeds have become available including low power CMOS versions — the original was made in NMOS and dissipated about 1 watt. Zilog now use the processor as a core within its range of Z800 microcontrollers with various configurations of on-chip RAM and

The Z80 programming model essential consists of a set of 8 bit registers which can be paired together to create 16 bit versions for use as data storage or address pointers. There are two register sets within the model: the main and alternate. Only one set can be used at any one time and the switch and data transfer is performed by the EXX instruction. The registers in the alternate set are designated by a ´ suffix. 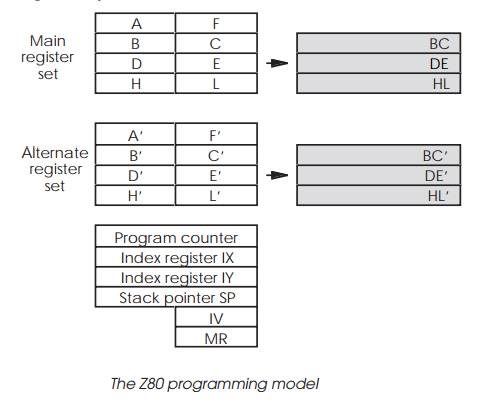 The model has an 8 bit accumulator A and a flags register known as F. This contains the status information such as carry, zero, sign and overflow. This register is also known as PSW (program status word) in some documentation. Registers B, C, D, E, H and L are 8 bit general-purpose registers that can be paired to create 16 registers known as BC, DE and HL. The remaining registers are the program counter PC, two index registers IX and IY and a stack pointer SP. All these four registers are 16 bits in size and can access the whole 64 kbytes of external memory that the Z80 can access. There are two additional registers IV and MR which are the interrupt vector and the memory refresh registers. The IV register is used in the interrupt handling mode 2 to point to the required software routine to process the interrupt. In mode 1, the interrupt vector is supplied via the external data bus. The memory refresh register is used to control the on-chip DRAM refresh circuitry.

Unlike the MC6800, the Z80 does not use memory mapped I/O and instead uses the idea of ports, just like the 8080. The lower 8 bits of the address bus are used along with the IORQ signal to access any external peripherals. The IORQ signal is used to differ-entiate the access from a normal memory cycle. These I/O accesses are similar from a hardware perspective to a memory cycle but only occur when an I/O port instruction (IN, OUT) is executed. In some respects, this is similar to the RISC idea of load and store instructions to bring information into the processor, process it and then write out the data. This system gives 255 ports and is usually sufficient for most embedded designs.

The MC6800 was introduced in the mid-1970s by Motorola and is as an architecture the basis of several hundred derivative processors and microcontrollers such as the MC6809, MC6801, MC68HC05, MC68HC11, MC68HC08 families. 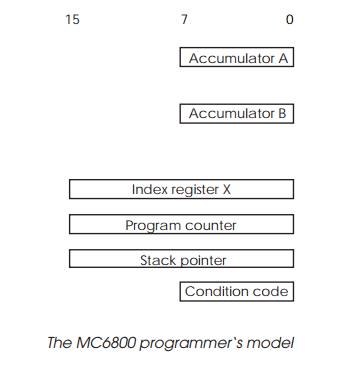 Its external bus was synchronous with separate address and data ports and the device operated at either 1, 1.5 or 2 MHz. The instruction set was essentially based around an 8 bit instruc tion with extensions for immediate values, address offsets and so on. It supported both non-maskable and software interrupts.