The block diagram shows how the processor is partitioned into several separate functional units which can all execute concurrently. It features a full Harvard architecture internally and is remarkably similar at the block level, to the PowerPC RISC processor.

The design is revolutionary rather than evolutionary: it takes the ideas of overlapping instruction execution and pipelining to a new level for CISC processors. The floating point and integer execution units work in parallel with the on-chip caches and memory management to increase the overlapping so that many instructions are executed in a single cycle, and thus give it its performance.

The pinout reveals a large number of new signals. One major difference about the MC68040 is its high drive capability. The processor can be configured on reset to drive either 55 or 5 mA per bus or control pin. This removes the need for external buffers, reducing chip count and the associated propagation delays, which often inflict a high speed design. The 32 bit address and 32 bit data buses are similar to its predecessors although the signals can be optionally tied together to form a single 32 bit multiplexed data/ address bus. 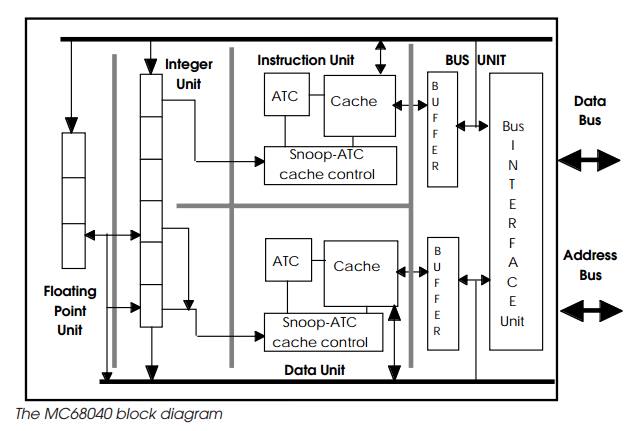 The User Programmable Attributes (UPA0 and UPA1) are driven according to 2 bits within each page descriptor used by the onboard memory management units. They are primarily used to enable the MC68040 Bus Snooping protocols, but can also be used to give additional address bits, software control for external caches and other such functions. The two size pins, SIZ0 and SIZ1, no longer indicate the number of remaining bytes left to be transferred as they did on the MC68020 and MC68030, but are used to generate byte enables for memory ports. They now indi-cate the size of the current transfer. Dynamic bus sizing is sup-ported via external hardware if required. Misaligned accesses are supported by splitting the transfer into a series of aligned accesses of differing sizes. The transfer type signals, TT1 and TT2, indicate the type of transfer that is taking place and the Transfer Modifier pins TM0-2 provide further information. These five pins effec-tively replace the three function code pins. The TLN0-1 pins indicate the current long word number within a burst fill access.

The synchronous bus is controlled by the Master and Slave transfer control signals: Transfer Start (TS*) indicates a valid address on the bus while the Transfer in Progress (TIP*) signal is asserted during all external bus cycles and can be used to power up/down external memory to conserve power in portable appli-cations. These two Master signals are complemented by the slave signals: Transfer Acknowledge (TA*) successfully terminates the bus cycle, while Transfer Error Acknowledge (TEA*) terminates the cycle and the burst fill as a result of an error. If both these signals are asserted on the first access of the burst, the cycle is terminated and immediately rerun. On the second, third and fourth accesses, a retry attempt is not allowed and the processor simply assumes that an error has occurred and will terminate the burst as normal. 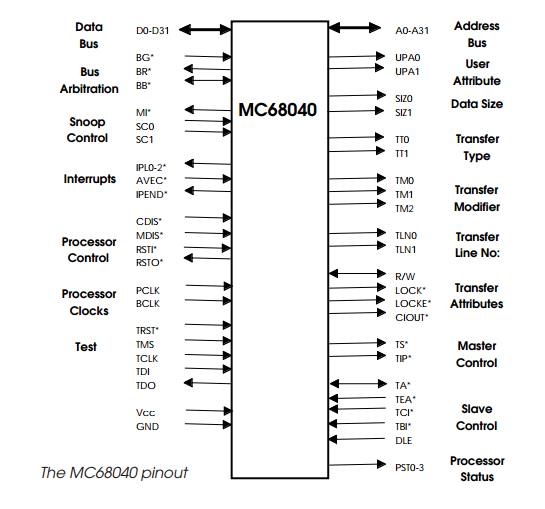 The processor can be configured to use a different signal, Data Latch Enable DLE to latch read data instead of the rising edge of the BCLK clock. The internal caches and memory management units can be disabled via the CDIS* and MDIS* pins respectively.

To the programmer the programming model of the MC68040 is the same as its predecessors such as the MC68030. It has the same eight data and eight address registers, the vector same base register (VBR), the alternate function code registers although some codes are reserved, the same dual Supervisor stack pointer and the two cache control registers although only two bits are now used to enable or disable either of the two on-chip caches. Inter-nally the implementation is different. Its instruction execution unit consists of a six–stage pipeline which sequentially fetches an instruction, decodes it, calculates the effective address, fetches an address operand, executes the instruction and finally writes back the results. To prevent pipeline stalling, an internal Harvard architecture is used to allow simultaneous instruction and oper-and fetches. It has been optimised for many instructions and addressing modes so that single-cycle execution can be achieved. The early pipeline stages are effectively duplicated to allow both paths of a branch instruction to be processed until the path decision is taken. This removes pipeline stalls and the subsequent performance degradation. While integer instructions are being executed, the floating point unit is free to execute floating point instructions. 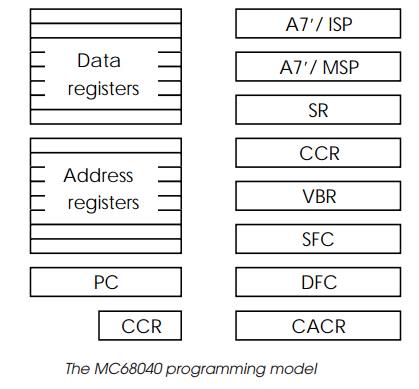