The Pentium is essentially an enhanced 80486 from a pro-gramming model. It uses virtually the same programming model and instruction set — although there are some new additions.

The most noticeable enhancement is its ability to operate as a superscalar processor and execute two instructions per clock. To do this it has incorporated many new features that were not present on the 80486.

As the internal architecture diagram shows, the device has two five-stage pipelines that allow the joint execution of two integer instructions provided that they are simple enough not to use microcode or have data dependencies. This restriction is not that great a problem as many compilers have now started to concentrate on the simpler instructions within CISN instruction sets to improve their performance.

To maintain the throughput, the unified cache that ap-peared on the 80486 has been dropped in favour of two separate 8 kbyte caches: one for data and one for code. These caches are fed by an external 64 bit wide burst mode type data bus. The caches also now support write-back MESI policies instead of the less efficient write-through design.

Branches are accelerated using a branch target cache and work in conjunction with the code cache and prefetch buffers. The instruction set now supports an 8 byte compare and exchange instruction and a special processor identification instruction. The cache coherency support also has some new instructions to allow programmer’s control of the MESI coherency policy. 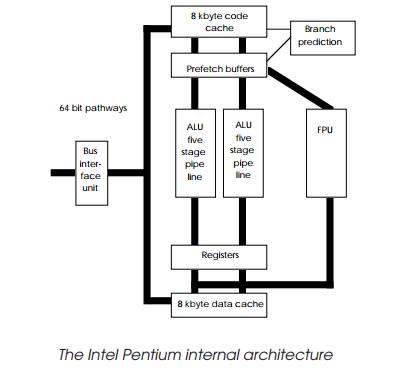 The Pentium has an additional control register and system management mode register that first appeared on the 80386SL which provides intelligent power control. 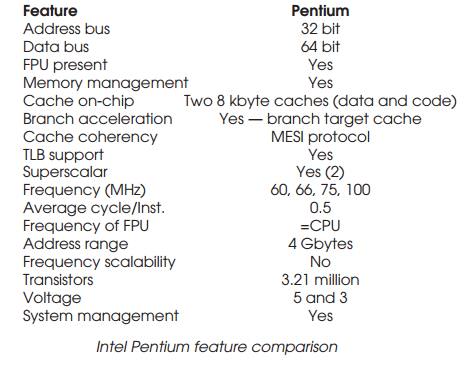 The Pentium Pro processor is the name for Intel's successor to the Pentium and was previously referred to as the P6 processor. The processor was Intel’s answer to the RISC threat posed by the DEC Alpha and Motorola PowerPC chips. It embraces many techniques that are used to achieve superscalar performance that have appeared previously on RISC processors such as the MPC604 PowerPC chip. It was unique in that the device actually consisted of two separate die within a single ceramic pin grid array: one die is the processor with its level one cache on-chip and the second die is the level 2 cache which is needed to maintain the instruction and data throughput needed to maintain the level of performance. It was originally introduced at 133 MHz and gained some accept-ance within high-end PC/workstation applications. Both caches support the full MESI cache coherency protocol.

It achieves superscalar operation by being able to execute up to five instructions concurrently although this is a peak figure and a more realistic one to two instructions per clock is a more accurate average figure. This is done through a technique called dynamic execution using multiple branch prediction, dataflow analysis and speculative execution.

This is where the processor predicts where a branch instruc-tion is likely to change the program flow and continues execution based on this assumption, until proven or more accurately, until correctly evaluated. This removes any delay providing the branch prediction was correct and speeds up branch execution.

This is an out of order execution and involves analysing the code and determining if there are any data dependencies. If there are, this will stall the superscalar execution until these are re-solved. For example, the processor cannot execute two consecu-tive integer instructions if the second instruction depends on the result of its predecessor. By internally reordering the instructions, such delays can be removed and thus faster execution can be restored. This can cause problems with embedded systems in that the reordering means that the CPU will not necessarily execute the code in programme order but in a logical functional sequence. To do this, the processor needs to understand any restrictions that may affect its reordering. This information is frequently provided by splitting the memory map into areas, with each area having its own attributes. These functions are described in Chapter 3.

Speculative execution is where instructions are executed speculatively, usually following predicted branch paths in the code until the true and correct path can be determined. If the processor has speculated correctly, then performance has been gained. If not, the speculative results are discarded and the proc-essor continues down the correct path. If more correct speculation is achieved than incorrect, the processor performance increases.

It is fair to say that the processor has not been as successful as the Pentium. This is because faster Pentium designs, especially those from Cyrix, outperformed it and were considerably cheaper. The final problem it had was that it was not optimised for 16 bit software such as MS-DOS and Windows 3.x applications and required 32 bit software to really achieve its performance. The delay in the market in getting 32 bit software — Windows 95 was almost 18 months late and this stalled the market considerably — did not help its cause, and the part is now overshadowed by the faster Pentium parts and the Pentium II.

The MMX instructions or multimedia extensions as they have also been referred to were introduced to the Pentium proces-sor to provide better support for multimedia software running on a PC using the Intel architecture. Despite some over-exaggerated claims of 400% improvement, the additional instructions do pro-vide additional support for programmers to improve their code. About 50 instructions have been added that use the SIMD (single instruction, multiple data) concept to process several pieces of data with a single instruction, instead of the normal single piece of data.

To do this, the eight floating point registers can be used to support MMX instructions or floating point. These registers are 80 bits wide and in their MMX mode, only 64 bits are used. This is enough to store a new data type known as the packed operand. This supports eight packed bytes, four packed 16 bit words, two packed 32 bit double words, or a single 64 bit quad word. This is extremely useful for data manipulation where pixels can be packed into the floating point register and manipulated simultaneously.

This has led to problems with some software and the discovery of some bugs in the silicon (run a multimedia applica-tion and then watch Excel get all the financial calculations wrong). There are fixes available and this problem has been resolved. However, the success of MMX does seem to be dependent on factors other than the technology and the MMX suffix has become a requirement. If a PC doesn’t have MMX, it is no good for multimedia. For embedded system, this statement is not valid and its use is not as obligatory as it might seem.

What is interesting is that MMX processors also have other improvements to help the general processor performance and so it can be a little difficult to see how much MMX can actually help. The second point is that many RISC processors, especially the PowerPC as used in the Apple Macintosh, can beat an MMX processor running the same multimedia application. The reason is simple. Many of the instructions and data manipulation that MMX brings, these processors have had as standard. They may not have packed data, but they don’t have to remember if they used a floating point instruction recently and should now save the regis-ters before using an MMX instruction. What seems to be an elegant solution does have some drawbacks.

The Pentium II was the next generation Intel processor and uses a module based technology and a PCB connector to provide the connection to a Intel designed motherboard. It no longer uses a chip package and is only available as a module. Essentially, a redesigned and improved Pentium Pro core with larger caches, it was the fastest Intel processor available until the Pentium III appeared. It is clear that Intel is focusing on the PC market with its 80x86 architecture and this does raise the question the suitability of these processors to be used in embedded systems. With the subsequent Pentium III and Pentium IV processors requiring specialised motherboard support, their suitability for embedded designs is limited to completely built boards and hardwares. The other problem with these types of architectures is that the inte-grated caches and other techniques they use to get the processing speed mean that the processor becomes more statistical in nature and it becomes difficult to predict how long it will take to do a task. This is another topic we will come back to in later chapters.