Selecting and Evaluating the End Point

Earlier we made an important distinction between an end point and an equivalence point. The difference between these two terms is important and deserves repeating. The equivalence point occurs when stoichiometrically equal amounts of analyte and titrant react. For example, if the analyte is a triprotic weak acid, a titration with NaOH will have three equivalence points corresponding to the addition of one, two, and three moles of OH– for each mole of the weak acid. An equivalence point, therefore, is a theoretical not an experimental value.

Where Is the Equivalence Point?

We have already learned how to calculate the equivalence point for the titration of a strong acid with a strong base, and for the titration of a weak acid with a strong base. We also have learned to sketch a titra- tion curve with a minimum of calculations. Can we also locate the equivalence point without performing any calculations? The answer, as you may have guessed, is often yes! 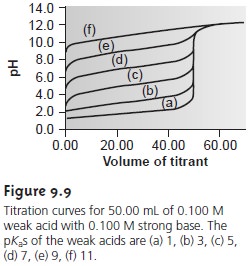 Another situation in which an inflection point may be missing or difficult to detect occurs when the analyte is a multiprotic weak acid or base whose successive dissociation constants are similar in magnitude. To see why this is true let’s con- sider the titration of a diprotic weak acid, H2A, with NaOH. During the titration the following two reactions occur.

Finding the End Point with a Visual Indicator

One interesting group of weak acids and bases are derivatives of organic dyes. Because such com- pounds have at least one conjugate acid–base species that is highly colored, their titration results in a change in both pH and color. This change in color can serve as a useful means for determining the end point of a titration, pro- vided that it occurs at the titration’s equivalence point.

The pH at which an acid–base indicator changes color is determined by its acid dissociation constant. For an indicator that is a monoprotic weak acid, HIn, the following dissociation reaction occurs

for which the equilibrium constant is

Taking the negative log of each side of equation 9.5, and rearranging to solve for pH gives a familiar equation.

The two forms of the indicator, HIn and In–, have different colors. The color of a solution containing an indicator, therefore, continuously changes as the concen- tration of HIn decreases and the concentration of In– increases. If we assume that both HIn and In– can be detected with equal ease, then the transition between the two colors reaches its midpoint when their concentrations are identical or when the pH is equal to the indicator’s pKa. The equivalence point and the end point coin- cide, therefore, if an indicator is selected whose pKa is equal to the pH at the equiva- lence point, and the titration is continued until the indicator’s color is exactly halfway between that for HIn and In–. Unfortunately, the exact pH at the equiva- lence point is rarely known. In addition, detecting the point where the concentra- tions of HIn and In– are equal may be difficult if the change in color is subtle. 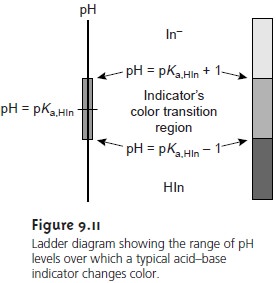 Substi- tuting these inequalities into equation 9.6 shows that an indicator changes color over a pH range of ±1 units on either side of its pKa (Figure 9.11). Thus, the indicator will be the color of HIn when the pH is less than pKa – 1, and the color of In– for pHs greater than pKa + 1.

A list of several common acid–base indicators, along with their pKas, color changes, and pH ranges, is provided in the top portion of Table 9.4.

In some cases, mixed indicators, which are a mixture of two or more acid–base indicators, provide a narrower range of pHs over which the color change occurs. A few examples of such mixed indicators are included in the middle portion of Table 9.4. Adding a neutral screening dye, such as methylene blue, also has been found to narrow the pH range over which an indicator changes color (lower portion of Table 9.4). In this case, the neutral dye provides a gray color at the midpoint of the indicator’s color transition. 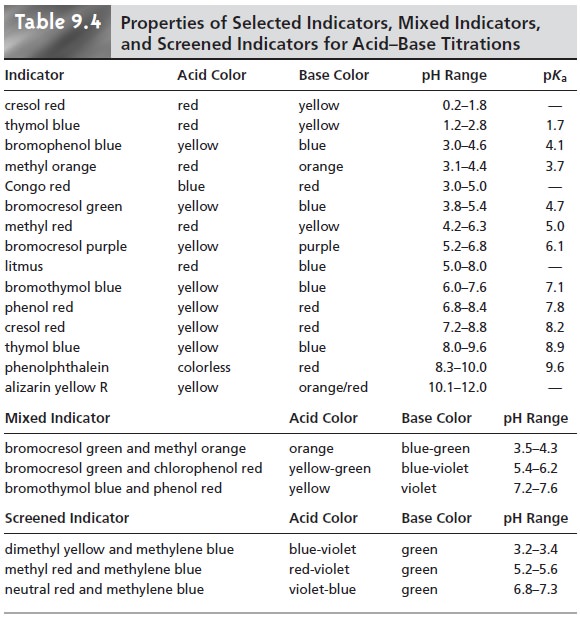 The relatively broad range of pHs over which any indicator changes color places additional limitations on the feasibility of a titration. To minimize a determi- nate titration error, an indicator’s entire color transition must lie within the sharp transition in pH occurring near the equivalence point. Thus, in Figure 9.12 we see that phenolphthalein is an appropriate indicator for the titration of 0.1 M acetic acid with 0.1 M NaOH. Bromothymol blue, on the other hand, is an inappropriate indicator since its change in color begins before the initial sharp rise in pH and, as a result, spans a relatively large range of volumes. The early change in color increases the probability of obtaining inaccurate results, and the range of possible end point volumes increases the probability of obtaining imprecise results. 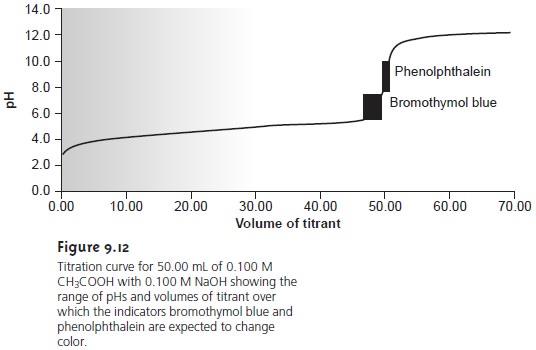 An alternative approach to finding a titration’s end point is to monitor the titration reaction with a suitable sensor whose signal changes as a function of the analyte’s concentration. Plotting the data gives us the resulting titration curve. The end point may then be determined from the titration curve with only a minimal error. 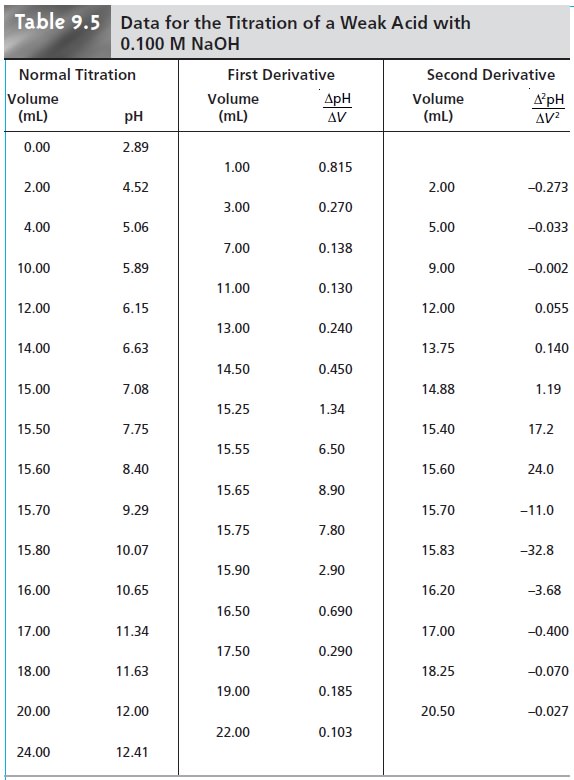 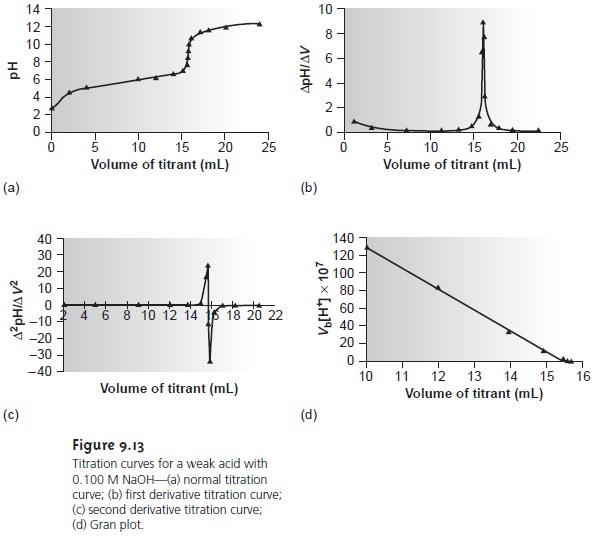 and is plotted as the average of the two volumes (2.00 mL). The remainder of the data for the second derivative titration curve are shown in Table 9.5 and plotted in Figure 9.13c.

Derivative methods are particularly well suited for locating end points in multi- protic and multicomponent systems, in which the use of separate visual indicators for each end point is impractical. The precision with which the end point may be located also makes derivative methods attractive for the analysis of samples with poorly defined normal titration curves.

Consider again the titration of a monoprotic weak acid, HA, with a strong base. At any point during the titration the weak acid is in equilibrium with H3O+ and A–

Before the equivalence point, and for volumes of titrant in the titration curve’s buffer region, the concentrations of HA and A– are given by the following equations. 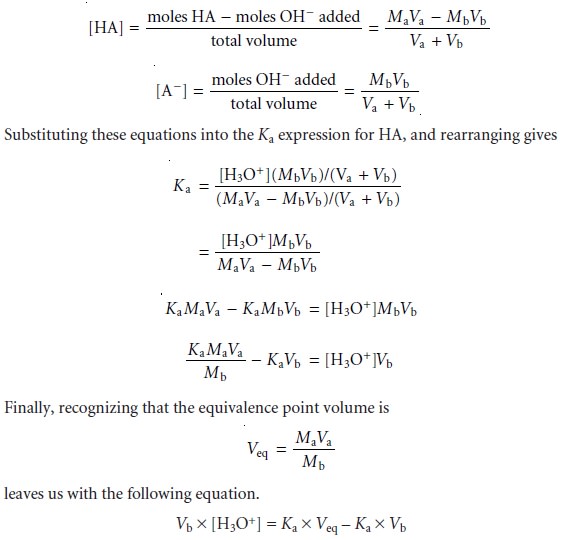 For volumes of titrant before the equivalence point, a plot of Vb x [H3O+] versus Vb is a straight line with an x-intercept equal to the volume of titrant at the end point and a slope equal to –Ka.* Results for the data in Table 9.5 are shown in Table 9.6 and plotted in Figure 9.13d. Plots such as this, which convert a portion of a titration curve into a straight line, are called Gran plots. 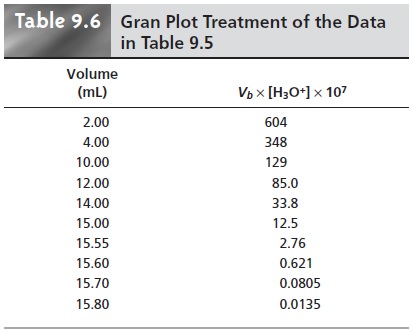 An idealized thermometric titration curve (Figure 9.14a) consists of three distinct linear regions. Before adding titrant, any change in temperature is due to the cooling or warming of the solution containing the analyte. Adding titrant ini- tiates the exothermic acid–base reaction, resulting in an increase in temperature. This part of a thermometric titration curve is called the titration branch.

The temperature continues to rise with each addition of titrant until the equivalence point is reached. After the equivalence point, any change in temperature is due to the difference between the temperatures of the analytical solution and the titrant, and the enthalpy of dilution for the excess titrant. Actual thermometric titration curves (Figure 9.14b) frequently show curvature at the intersection of the titration branch and the excess titrant branch due to the incompleteness of the neutraliza- tion reaction, or excessive dilution of the analyte during the titration. The latter problem is minimized by using a titrant that is 10–100 times more concentrated than the analyte, although this results in a very small end point volume and a larger relative error.

Although not commonly used, thermometric titrations have one distinct ad- vantage over methods based on the direct or indirect monitoring of pH. As dis- cussed earlier, visual indicators and potentiometric titration curves are limited by the magnitude of the relevant equilibrium constants. For example, the titra- tion of boric acid, H3BO3, for which Ka is 5.8 x 10–10, yields a poorly defined equivalence point (Figure 9.15a). The enthalpy of neutralization for boric acid with NaOH, however, is only 23% less than that for a strong acid (–42.7 kJ/mol for H3BO3 versus –55.6 kJ/mol for HCl), resulting in a favorable thermometric titration curve (Figure 9.15b).