Chemistry and Properties of EDTA Ethylenediaminetetraacetic acid, or EDTA, is an aminocar- boxylic acid. The structure of EDTA .

Chemistry and Properties of EDTA

Ethylenediaminetetraacetic acid, or EDTA, is an aminocar- boxylic acid. The structure of EDTA is shown in Figure 9.25a. EDTA, which is a Lewis acid, has six binding sites (the four car- boxylate groups and the two amino groups), providing six pairsof electrons. The resulting metal–ligand complex, in which EDTA forms a cage-like structure around the metal ion (Figure 9.25b), is very stable. The actual number of coordination sites depends on the size of the metal ion; however, all metal–EDTA complexes have a 1:1 stoichiometry. 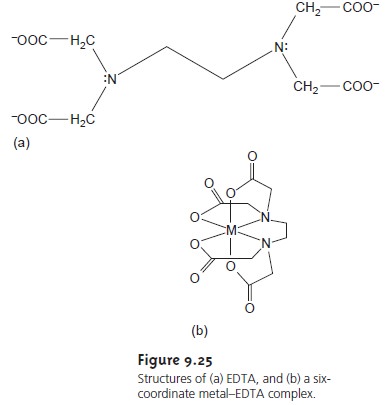 where Y4– is a shorthand notation for the chemical form of EDTA shown in Figure 9.25. The formation constant for this reaction

is quite large, suggesting that the reaction’s equilibrium position lies far to the right. Formation constants for other metal–EDTA complexes are found in Appendix 3C.

EDTA Is a Weak Acid

Besides its properties as a ligand, EDTA is also a weak acid. The fully protonated form of EDTA, H6Y2+, is a hexaprotic weak acid with succes- sive pKa values of

Recognizing EDTA’s acid–base properties is important. The formation constant for CdY2– in equation 9.11 as- sumes that EDTA is present as Y4–. If we restrict the pH to levels greater than 12, then equation 9.11 provides an adequate description of the formation of CdY2–. For pH levels less than 12, however, Kf overestimates the stability of the CdY2– complex.

At any pH a mass balance requires that the total concentration of unbound EDTA equal the combined concentrations of each of its forms.

To correct the formation constant for EDTA’s acid–base properties, we must ac count for the fraction, αY4–, of EDTA present as Y4–. 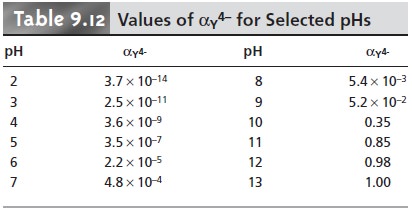 Values of αY4– are shown in Table 9.12. Solving equation 9.12 for [Y4–] and substi- tuting into the equation for the formation constant gives

If we fix the pH using a buffer, then αY4– is a constant. Combining αY4– with Kf 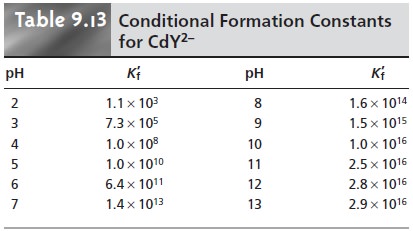 EDTA Must Compete with Other Ligands

To maintain a constant pH, we must add a buffering agent. If one of the buffer’s components forms a metal–ligand complex with Cd2+, then EDTA must compete with the ligand for Cd2+. For example, an NH4+/NH3 buffer includes the ligand NH3, which forms several stable Cd2+–NH3 complexes. EDTA forms a stronger complex with Cd2+ and will displace NH3. The presence of NH3, however, decreases the stability of the Cd2+–EDTA complex.

We can account for the effect of an auxiliary complexing agent, such as NH3, in the same way we accounted for the effect of pH. Before adding EDTA, a mass balance on Cd2+ requires that the total concentration of Cd2+, CCd, be

The fraction, αCd2+, present as uncomplexed Cd2+ is

If the concentration of NH3 is held constant, as it usually is when using a buffer, then we can rewrite this equation as

where Kf˝ is a new conditional formation constant accounting for both pH and the presence of an auxiliary complexing agent. Values of αMn+ for several metal ions are provided in Table 9.14.