1. What is meant by periodic and non- periodic motion?. Give any two examples, for each motion.

2. What is meant by force constant of a spring?.

8. Write down the time period of simple pendulum.

9. State the laws of simple pendulum?.

10. Write down the equation of time period for linear harmonic oscillator.

11. What is meant by free oscillation?.

12. Explain damped oscillation. Give an example.

13. Define forced oscillation. Give an example.

14. What is meant by maintained oscillation?. Give an example.

15. Explain resonance. Give an example.

5. Discuss the simple pendulum in detail.

6. Explain the horizontal oscillations of a spring.

7. Describe the vertical oscillations of a spring.

8. Write short notes on the oscillations of liquid column in U-tube.

9. Discuss in detail the energy in simple harmonic motion.

10. Explain in detail the four different types of oscillations.

1. Consider the Earth as a homogeneous sphere of radius R and a straight hole is bored in it through its centre. Show that a particle dropped into the hole will execute a simple harmonic motion such that its time period is

Earth is assumed to be a homogeneous sphere.

Its centre is at O and Radius = R

The hole is bored straight through the centre along its diameter. The acceleration due to gravity at the surface of the earth = g

Mass of the body dropped inside the hole = m

After time t, the depth it reached (inside the earth) = d

The value of ‘g’ decreases with deportation.

So acceleration due to gravity at deportation = ‘g'

Let y be the distance from the centre of the earth

Now, force on the body of mass m due to this new acceleration g' will be

and this force is directed towards the mean position O.

The body dropped in the hole will execute S.H.M Spring factor k = mg/Radius

2. Calculate the time period of the oscillation of a particle of mass m moving in the potential defined as 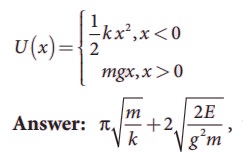 where E is the total energy of the particle.

4. A piece of wood of mass m is floating erect in a liquid whose density is ρ. If it is slightly pressed down and released, then executes simple harmonic motion. Show that its time period of oscillation is

5. Consider two simple harmonic motion along x and y-axis having same frequencies but different amplitudes as x = A sin (ωt + φ) (along x axis) and y = B sin ωt (along y axis). Then show that

and also discuss the special cases when

Note: when a particle is subjected to two simple harmonic motion at right angle to each other the particle may move along different paths. Such paths are called Lissajous figures.

a. y=B/A x equation  is  a  straight  line passing through origin with positive slope.

b.  y= - B/A x equation is a straight line passing through origin with negative slope.

equation is an ellipse whose center is origin.

equation is an ellipse (oblique ellipse which means tilted ellipse)

6. Show that for a particle executing simple harmonic motion

7. Compute the time period for the following system if the block of mass m is slightly displaced vertically down from its equilibrium position and then released. Assume that the pulley is light and smooth, strings and springs are light.

Pulley is fixed rigidly here. When the mass displace by y and the spring will also stretch by y. Therefore, F = T = ky