Let us consider a massless spring with stiffness constant or force constant k attached to a ceiling. 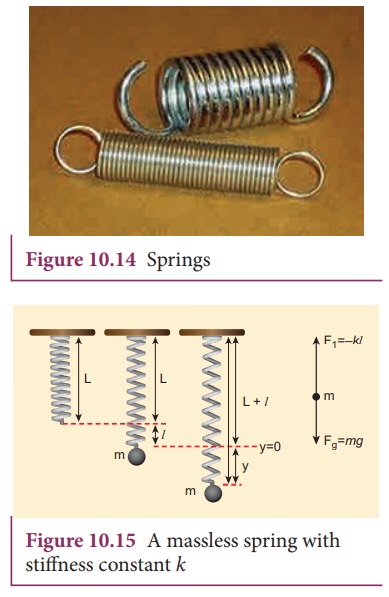 Let us consider a massless spring with stiffness constant or force constant k attached to a ceiling as shown in Figure 10.15. Let the length of the spring before loading mass m be L. If the block of mass m is attached to the other end of spring, then the spring elongates by a length l. Let F1 be the restoring force due to stretching of spring. Due to mass m, the gravitational force acts vertically downward. We can draw free-body diagram for this system as shown in Figure 10.15. When the system is under equilibrium,

But the spring elongates by small displacement l, therefore,

Suppose we apply a very small external force on the mass such that the mass further displaces downward by a displacement y, then it will oscillate up and down. Now, the restoring force due to this stretching of spring (total extension of spring is y + l ) is

Since, the mass moves up and down with acceleration d2y/dt2, by drawing the free body, diagram for this case, we get

The gravitational force opposes the restoring force. Substituting equation (10.29) in equation (10.32), we get

Applying Newton’s law, we get

The above equation is in the form of simple harmonic differential equation. Therefore, we get the time period as

The time period can be rewritten using equation (10.29)