(i) Vibration of a tuning fork.

(ii) Vibration in a stretched string.

(iii) Oscillation of a simple pendulum. 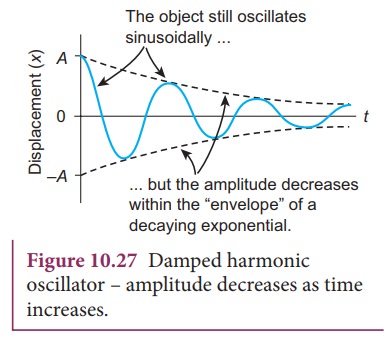 (i) The oscillations of a pendulum (including air friction) or pendulum oscillating inside an oil filled container.

(iii) Oscillations in a dead beat and ballistic galvanometers.

While playing in swing, the oscillations will stop after a few cycles, this is due to damping. To avoid damping we have to supply a push to sustain oscillations. By supplying energy from an external source, the amplitude of the oscillation can be made constant. Such vibrations are known as maintained vibrations.

The vibration of a tuning fork getting energy from a battery or from external power supply.

Any oscillator driven by an external periodic agency to overcome the damping is known as forced oscillator or driven oscillator.

It is a special case of forced vibrations where the frequency of external periodic force (or driving force) matches with the natural frequency of the vibrating body (driven). As a result the oscillating body begins to vibrate such that its amplitude increases at each step and ultimately it has a large amplitude. Such a phenomenon is known as resonance and the corresponding vibrations are known as resonance vibrations.

The breaking of glass due to sound