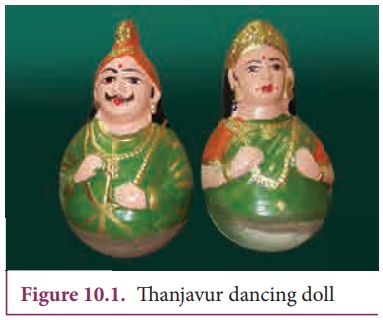 Have you seen the Thanjavur Dancing Doll (In Tamil, it is called ‘Thanjavur thalayatti bommai’)?. It is a world famous Indian cultural doll (Figure 10.1). What does this doll do when disturbed? It will dance such that the head and body move continuously in a to and fro motion, until the movement gradually stops. Similarly, when we walk on the road, our hands and legs will move front and back. Again similarly, when a mother swings a cradle to make her child sleep, the cradle is made to move in to and fro motion. All these motions are different from the motion that we have discussed so far. These motions are shown in Figure 10.2. Generally, they are known as oscillatory motion or vibratory motion. A similar motion occurs even at atomic levels. When the temperature is raised, the atoms in a solid vibrate about their rest position (mean position or equilibrium position). The study of vibrational motion is very important in engineering applications, such as, designing the structure of building, mechanical equipments, etc. 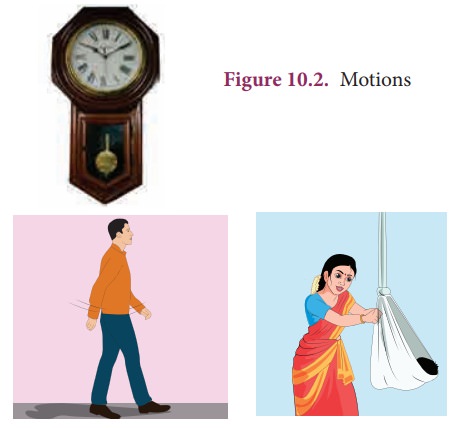 Any motion which repeats itself in a fixed time interval is known as periodic motion.

Examples : Hands in pendulum clock, swing of a cradle, the revolution of the Earth around the Sun, waxing and waning of Moon, etc.

Any motion which does not repeat itself after a regular interval of time is known as non-periodic motion.

Classify the following motions as periodic and non-periodic motions?.

a. Motion of Halley’s comet.

b. Motion of clouds.

c. Moon revolving around the Earth.

Which of the following functions of time represent periodic and non-periodic motion?.

Discuss “what will happen if the motion of the Earth around the Sun is not a periodic motion”.

When an object or a particle moves back and forth repeatedly for some duration of time its motion is said to be oscillatory (or vibratory). Examples; our heart beat, swinging motion of the wings of an insect, grandfather’s clock (pendulum clock), etc. Note that all oscillatory motion are periodic whereas all periodic motions need not be oscillation in nature. see Figure 10.3 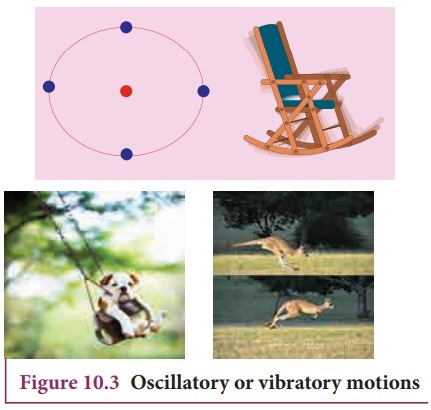