Nitric acid prepared in large scales using Ostwald's process. In this method ammonia from Haber’s process is mixed about 10 times of air. This mixture is preheated and passed into the catalyst chamber where they come in contact with platinum gauze. The temperature rises to about 1275 K and the metallic gauze brings about the rapid catalytic oxidation of ammonia resulting in the formation of NO, which then oxidised to nitrogen dioxide.

The nitrogen dioxide produced is passed through a series of adsorption towers. It reacts with water to give nitric acid. Nitric acid formed is bleached by blowing air.

Pure nitric acid is colourless. It boils at 86 °C. The acid is completely miscible with water forming a constant boiling mixture (98% HNO3, Boiling point 120.5 °C). Fuming nitric acid contains oxides of nitrogen. It decomposes on exposure to sunlight or on being heated, into nitrogen dioxide, water and oxygen.

Due to this reaction pure acid or its concentrated solution becomes yellow on standing.

In most of the reactions, nitric acid acts as an oxidising agent. Hence the oxidation state changes from +5 to a lower one. It doesn’t yield hydrogen in its reaction with metals. Nitric acid can act as an acid, an oxidizing agent and an nitrating agent.

As an acid: Like other acids it reacts with bases and basic oxides to form salts and water

As an oxidising agent: The nonmetals like carbon, sulphur, phosphorus and iodine are oxidised by nitric acid.

As an nitrating agent: In organic compounds replacement of a –H atom with –NO2 is often referred as nitration. For example.

Nitration takes place due to the formation of nitronium ion

Action of nitric acid on metals

All metals with the exception of gold, platinum, rhodium, iridium and tantalum reacts with nitric acid. Nitric acid oxidises the metals. Some metals such as aluminium, iron, cobalt, nickel and chromium are rendered passive in concentrated acid due to the formation of a layer of their oxides on the metal surface, which prevents the nitric acid from reacting with pure metal.

With weak electropositive metals like tin, arsenic, antimony, tungsten and molybdenum, nitric acid gives metal oxides in which the metal is in the higher oxidation state and the acid is reduced to a lower oxidation state. The most common products evolved when nitric acid reacts with a metal are gases NO2, NO and H2O. Occasionally N2, NH2OH and NH3 are also formed.

The reactions of metals with nitric acid are explained in 3 steps as follows:

Primary reaction: Metal nitrate is formed with the release of nascent hydrogen 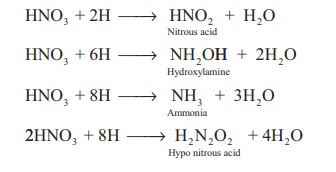 Tertiary reaction: The secondary products either decompose or react to give final products

Decomposition of the secondary:

Copper reacts with nitric acid in the following manner

The concentrated acid has a tendency to form nitrogen dioxide

Magnesium reacts with nitric acid in the following way

If the acid is diluted we get N2O

·           Nitric acid is used as a oxidising agent and in the preparation of aquaregia.