Phosphorus has several allotropic modification of which the three forms namely white, red and black phosphorus are most common.

Phosphorus has several allotropic modification of which the three forms namely white, red and black phosphorus are most common. 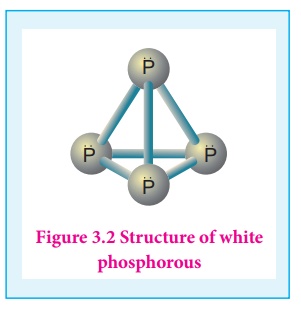 The freshly prepared white phosphorus is colourless but becomes pale yellow due to formation of a layer of red phosphorus upon standing. Hence it is also known as yellow phosphorus. It is poisonous in nature and has a characteristic garlic smell. It glows in the dark due to oxidation which is called phosphorescence. Its ignition temperature is very low and hence it undergoes spontaneous combustion in air at room temperature to give P2O5.

The phosphorus has a layer structure and also acts as a semiconductor. The four atoms in phosphorus have polymeric structure with chains of P4 linked tetrahedrally. Unlike nitrogen P≡P is less stable than P-P single bonds. Hence, phosphorus atoms are linked through single bonds rather than triple bonds. In addition to the above two more allotropes namely scarlet and violet phosphorus are also known for phosphorus.