Ammonia is formed by the hydrolysis of urea.

Ammonia is formed by the hydrolysis of urea.

Ammonia is prepared in the laboratory by heating an ammonium salt with a base.

It can also be prepared by heating a metal nitrides such as magnesium nitride with water.

It is industrially manufactured by passing nitrogen and hydrogen over iron catalyst (a small amount of K2O and Al2O3 is also used to increase the rate of attainment of equilibrium) at 750 K at 200 atm pressure. In the actual process the hydrogen required is obtained from water gas and nitrogen from fractional distillation of liquid air.

Ammonia is a pungent smelling gas and is lighter than air. It can readily liquefied by at about 9 atmospheric pressure. The liquid boils at -38.4°C and freezes at -77° C. Liquid ammonia resembles water in its physical properties. i.e. it is highly associated through strong hydrogen bonding. Ammonia is extremely soluble in water (702 Volume in 1 Volume of water) at 20°C and 760mm pressure.

At low temperatures two soluble hydrate NH3.H2O and 2NH3.H2O are isolated. In these molecules ammonia and water are linked by hydrogen bonds. In aqueous solutions also ammonia may be hydrated in a similar manner and we call the same as (NH3.H2O)

The dielectric constant of ammonia is considerably high to make it a fairly good ionising solvent like water.

Action of heat: Above 500°C ammonia decomposes into its elements. The decomposition may be accelerated by metallic catalysts like Nickel, Iron. Almost complete dissociation occurs on continuous sparking.

Reaction with air/oxygen: Ammonia does not burn in air but burns freely in free oxygen with a yellowish flame to give nitrogen steam.

In presence of catalyst like platinum, it burns to produce nitric oxide. This process is used for the manufacture of nitric acid and is known as ostwalds process.

Reducing property: Ammonia acts as a reducing agent. It reduces the metal oxides to metal when passed over heated metallic oxide.

Reaction with acids: When treated with acids it forms ammonium salts. This reaction shows that the affinity of ammonia for proton is greater than that of water.

With excess of chlorine ammonia reacts to give nitrogen trichloride, an explosive substance. 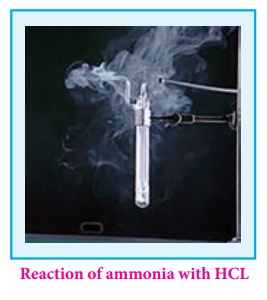 Formation of amides and nitrides: With strong electro positive metals such as sodium, ammonia forms amides while it forms nitrides with metals like magnesium.

Formation of amines: Ammonia forms ammonated compounds by ion dipole attraction. Eg. [CaCl2.8NH3]. In this, the negative ends of ammonia dipole is attracted to Ca2+ ion.

For example when excess ammonia is added to aqueous solution copper sulphate a deep blue colour compound [Cu(NH3)4 ]2+ is formed. 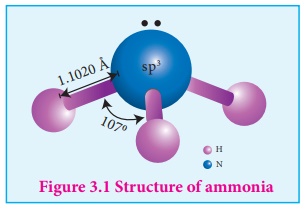