All the noble gases occur in the atmosphere.

All the noble gases occur in the atmosphere.

As we move along the noble gas elements, their atomic radius and boiling point increases from helium to radon. The first ionization energy decreases from helium to radon. Noble gases have the largest ionisation energy compared to any other elements in a given row as they have completely filled orbital in their outer most shell. They are extremely stable and have a small tendency to gain or lose electrons. The common physical properties of the group 18 elements are listed in the Table. 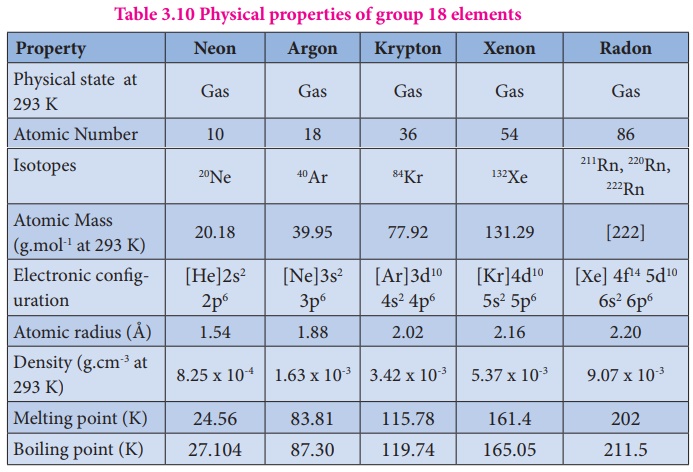 Noble gases are monoatomic, odourless, colourless, tasteless, and non-inflammable. They are highly unreactive. They are non-metallic in nature.

Only the xenon and krypton show some chemical reactivity. Xenon fluorides are prepare by direct reaction of xenon and fluorine under different conditions as shown below.

When XeF6 is heated at 50 °C in a sealed quartz vessel it forms XeOF4.

When the reaction is continued the following reaction takes place.

When XeF6 reacts with 2.5 M NaOH, sodium per xenate is obtained.

Sodium per xenate is very much known for its strong oxidizing property. For example, it oxidises manganese (II) ion into permanganate ion even in the absence of the catalyst.

Xenon reacts with PtF6 and gave an orange yellow solid [XePtF6] and this is insoluble in CCl4.

There is some evidence for existence of xenon dichloride XeCl2.

Krypton form krypton difluoride when an electric discharge is passes through Kr and fluorine at 183° C or when gases are irradiated with SbF5 it forms KrF2.2SbF3.

Table 3.11 Structures of compounds of Xenon: 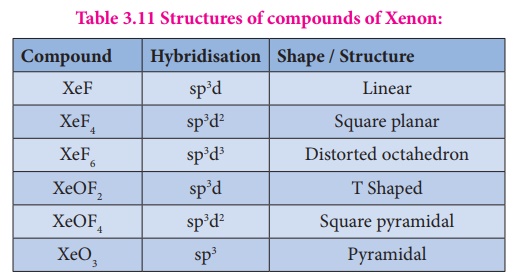 The inertness of noble gases is an important feature of their practical uses.

Neon is used in advertisement as neon sign and the brilliant red glow is caused by passing electric current through neon gas under low pressure.

Lamps filed with krypton are used in airports as approaching lights as they can penetrate through dense fog.

Xenon is used in fluorescent bulbs, flash bulbs and lasers.

Xenon emits an intense light in discharge tubes instantly. Due to this it is used in high speed electronic flash bulbs used by photographers

Radon is radioactive and used as a source of gamma rays

Radon gas is sealed as small capsules and implanted in the body to destroy malignant i.e. cancer growth