In this section, we introduce the basic types of memory components that are com-monly used in embedded systems.

In this section, we introduce the basic types of memory components that are commonly used in embedded systems. Now that we understand the operation of the bus, we are able to understand the pinouts of these memories and how values are read and written. We also need to understand the varieties of memory cells that are used to build memories. There are several varieties of both read-only and read/write memories, each with its own advantages. After discussing some basic characteristics of memories, we describe RAMs and then ROMs.

The most basic way to characterize a memory is by its capacity, such as 256 MB. However, manufacturers usually make several versions of a memory of a given size, each with a different data width. For example, a 256-MB memory may be available in two versions:

■ As a 32 M 8-bit array,a single memory access obtains a 1-bit data item, with a maximum of 223 different addresses.

The height/width ratio of a memory is known as its aspect ratio. The best aspect ratio depends on the amount of memory required. Internally, the data are stored in a two-dimensional array of memory cells as shown in Figure 4.15. Because the array is stored in two dimensions,the n-bit address received by the chip is split into a row and a column address (with n r c). 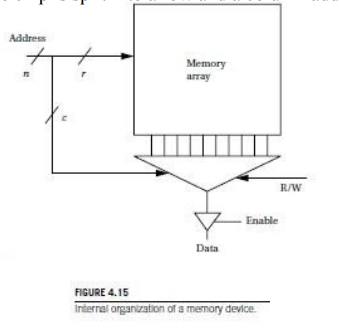 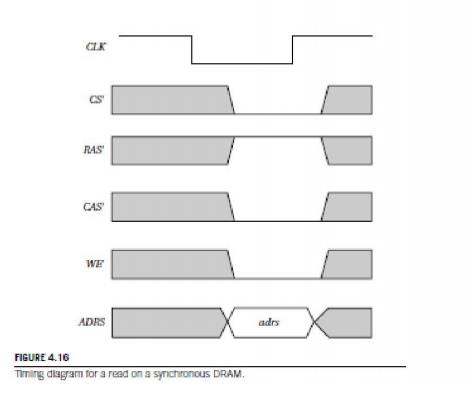 As shown in Figure 4.16, transitions on the control signals are related to a clock [Mic00]. RAS and CAS can therefore become valid at the same time. The address lines are not shown in full detail here; some address lines may not be active depend- ing on the mode in use. SDRAMs use a separate refresh signal to control refreshing. DRAM has to be refreshed roughly once per millisecond. Rather than refresh the entire memory at once, DRAMs refresh part of the memory at a time. When a section of memory is being refreshed, it cannot be accessed until the refresh is complete. The memory refresh occurs over fairly few seconds so that each section is refreshed every few microseconds.

SDRAMs include registers that control the mode in which the SDRAM operates. SDRAMs support burst modes that allow several sequential addresses to be accessed by sending only one address. SDRAMs generally also support an interleaved mode that exchanges pairs of bytes.

Read-only memories (ROMs) are preprogrammed with fixed data. They are very useful in embedded systems since a great deal of the code, and perhaps some data, does not change over time. Read-only memories are also less sensitive to radiation- induced errors.