The final part of a gas chromatograph is the detector.

The final part of a gas chromatograph is the detector. The ideal detector has several desirable features, including low detection limits, a linear response over a wide range of solute concentrations (which makes quantitative work easier), responsive- ness to all solutes or selectivity for a specific class of solutes, and an insensitivity to changes in flow rate or temperature. 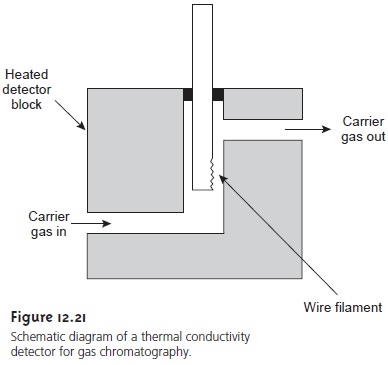 When a solute elutes from the column, the thermal conductivity of the mobile phase decreases and the temperature of the wire filament, and thus its resistance, in- creases. A reference cell, through which only the mobile phase passes, corrects for any time-dependent variations in flow rate, pressure, or electrical power, all of which may lead to a change in the filament’s resistance.

A TCD detector has the advantage of universality, since it gives a signal for any solute whose thermal conductivity differs from that of helium. Another ad- vantage is that it gives a linear response for solute concentrations over a range of 104–105 orders of magnitude. The detector also is nondestructive, making it pos- sible to isolate solutes with a postdetector cold trap. Unfortunately, the thermal conductivity detector’s detection limit is poor in comparison with other popular detectors.

Combustion of an organic compound in an H2/air flame results in a flame rich in electrons and ions. If a po- tential of approximately 300 V is applied across the flame, a small cur- rent of roughly 10–9–10–12 A develops. When amplified, this current provides a useful analytical signal. This is the basis of the popular flame ionization detector (FID), a schematic of which is shown in Figure 12.22. 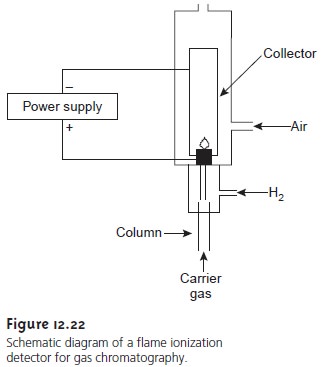 Most carbon atoms, except those in carbonyl and carboxylic groups, generate a signal, making the FID an almost universal detector for organic compounds. Most inorganic compounds and many gases, such as H2O and CO2, cannot be detected, making the FID detector ideal for the analysis of atmospheric and aqueous environmental sam- ples. Advantages of the FID include a detection limit that is approximately two to three orders of magnitude smaller than that for a thermal conductiv- ity detector and a linear response over 106–107 orders of magnitude in the amount of analyte injected. The sample, of course, is destroyed when using a flame ioniza- tion detector.

The electron capture detector is an example of a selec- tive detector. The detector consists of a beta emitter (a beta particle is an electron) such as 63Ni. The emitted electrons ionize the mobile phase, which is usually N2, re- sulting in the production of additional electrons that give rise to an electric current between a pair of electrodes (Figure 12.23). When a solute with a high cross section for the capture of electrons elutes from the column, the electric current decreases. This decrease in electric current serves as the signal. The ECD is highly selective to- ward solutes with electronegative functional groups, such as halogens, and nitro groups and is relatively insensitive to amines, alcohols, and hydrocarbons. Although its detection limit is excellent, its linear range extends over only about two orders of magnitude. 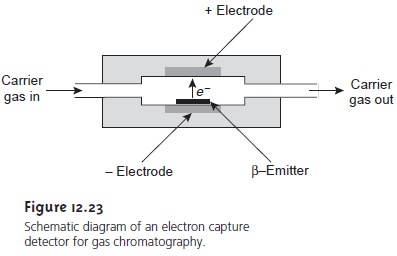 Two common detectors, which also are independent instruments, are Fourier transform infrared spectrophotometers (FT–IR) and mass spectrometers (MS). In GC–FT–IR, effluent from the column flows through an optical cell constructed from a 10–40-cm Pyrex tube with an internal diameter of 1–3 mm. The cell’s interior surface is coated with a reflecting layer of gold. Multiple reflections of the source radiation as it is transmitted through the cell increase the optical path length through the sample.

In GC–MS effluent from the column is introduced directly into the mass spec- trometer’s ionization chamber in a manner that eliminates the majority of the car- rier gas. In the ionization chamber all molecules (remaining carrier gas, solvent, and solutes) are ionized, and the ions are separated by their mass-to-charge ratio. Be- cause each solute undergoes a characteristic fragmentation into smaller ions, its mass spectrum of ion intensity as a function of mass-to-charge ratio provides qual- itative information that can be used to identify the solute. 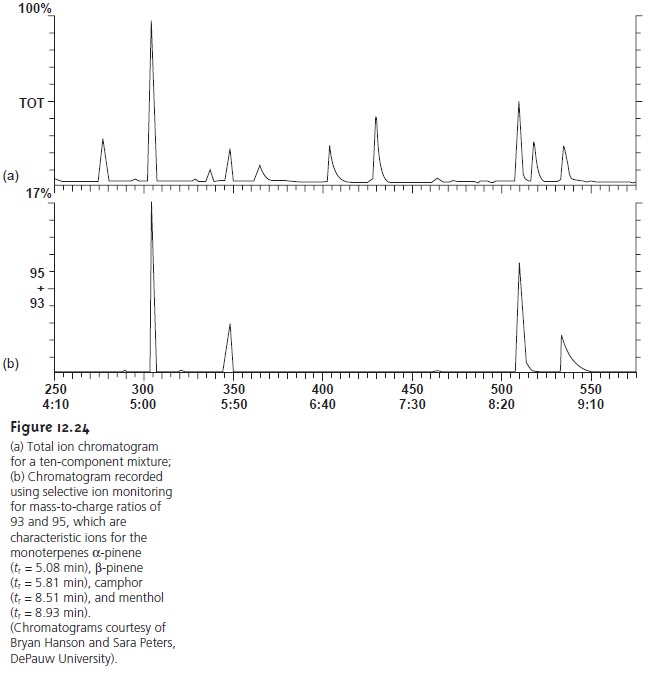 As a GC detector, the total ion current for all ions reaching the detector is usu- ally used to obtain the chromatogram (Figure 12.24a). Selectivity can be achieved by monitoring only specific mass-to-charge ratios (Figure 12.24b), a process called selective ion monitoring. A mass spectrometer provides excellent detection limits, typically 25 fg to 100 pg, with a linear range spanning five orders of magnitude.