At the beginning of a chromatographic separation the solute occupies a narrow band of finite width.

At the beginning of a chromatographic separation the solute occupies a narrow band of finite width. As the solute passes through the column, the width of its band continually increases in a process called band broadening. Column efficiency pro- vides a quantitative measure of the extent of band broadening.

Assuming a Gaussian profile, the extent of band broadening is measured by the variance or standard deviation of a chromatographic peak. The height of a theoreti- cal plate is defined as the variance per unit length of the column

where the variance, σ2, has units of distance squared. Because retention time and peak width are usually measured in seconds or minutes, it is more convenient to ex- press the standard deviation in units of time, τ, by dividing  by the mobile phase’s average linear velocity.

When a chromatographic peak has a Gaussian shape, its width at the baseline, w, is four times its standard deviation, τ.

Combining equations 12.13 through 12.15 gives the height of a theoretical plate in terms of the easily measured chromatographic parameters tr and w.

The number of theoretical plates in a chromatographic column is obtained by com- bining equations 12.12 and 12.16.

Alternatively, the number of theoretical plates can be approximated as

where w1/2 is the width of the chromatographic peak at half its height. 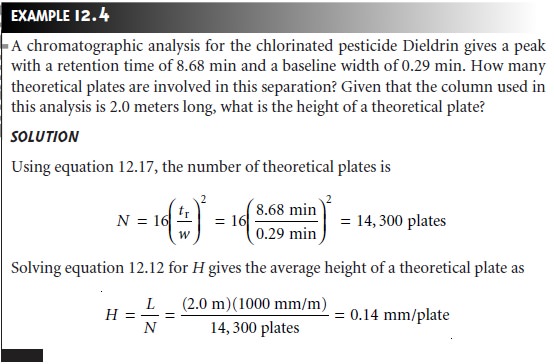