After reading this chapter you will learn:

Then we study how peripheral devices are incorporated in Embedded System. Control and Status Registers, Device Drivers and Watch Dog Timers are explained in the subsequent sections.

Checksums basically deals with the question whether the data stored in a memory device is valid or not?

To do this the checksum of the data in the memory device is computed and stored along with the data. The moment when we have to confirm the validity of the data, we just have to recalculate the checksum and compare it with previous checksum. If the two checksums match, the data is assumed to be valid.

The simplest checksum algorithm is to add up all the data bytes discarding carries.

A Checksum is usually stored at some fixed location in memory. This makes it easy to compute and store the check sum for the very first time and later on to compare the recomputed checksum with the original one.

Disadvantage: A simple sum-of-data checksum cannot detect many of the most common data errors.

A Cyclic Redundancy Check is a specific checksum algorithm designed to detect the most common data errors.

CRC’s are frequently used in Embedded Applications that requires the storage or transmission of large blocks of data.

The CRC works as follows:

The remainder of the division operation is the CRC Checksum

Control and status registers are the basic interface between and embedded processor and peripheral device.

These registers are a part of peripheral hardware and their location size and individual meanings are feature of the peripheral.

For example, The registers vary from device to device: example the registers within a serial controller are very different from those in a timer.

Depending upon the design of the processor and target board , peripheral devices are located either in the processor’s memory space or within the I/O space.

It is common for Embedded Systems to include some peripherals of each type. These are called Memory-Mapped and I/O-mapped peripherals.

Of the two types, memory-mapped peripherals are generally easier to work with and are increasingly popular.

Memory-mapped control and status registers can be used just like ordinary variables.

The goal of designing a device driver is to hide the hardware completely.

Attempts to hide the hardware completely are difficult.

For example all Flash memory devices share the concept of sectors. An erase operation can be performed only on an entire sector. Once erased individual bites or words can be rewritten.

Device drivers for embedded systems are quite different from the workstation counter parts. In modern computers workstation device drivers are most often concerned with satisfying the requirement of the operating system.

There are three benefits of good device driver:

Modularization, it makes the structure of the overall software is easier to understand.

There exists only one module that interacts directly with the peripheral’s registers making communication easier.

Components of a Device Driver

A device driver can be implemented (as components) in the following steps:

A data structure that overlays the memory-mapped control and status registers of the device:

This basic step involves creating a C style structure that is actually a map of the registers present in the device. These registers can be found out by referring to the data sheet for the device.

A table is created which maps the control register to their relative offsets.

An example is shown below for a timer counter data structure.

To make the bits within the control register easier to read and write individually, we define the following bitmasks:

This involves writing different functions that will implement the various tasks listed to be performed by the device.

Once the required functions and routines are coded the thing remaining to be done is to identify and write routines for servicing the interrupts.

It is hardware equipment.

It is special purpose hardware that protects the system from software hangs.

Watchdog timer always counts down from some large number to zero

This process takes a few seconds to reset, in the meantime, it is possible for embedded software to “kick” the watchdog timer, to reset its counter to the original large number.

If the timer expires i.e. counter reaches zero, the watchdog timer will assume that the system has entered a state of software hang, then resets the embedded processor and restarts the software

It is a common way to recover from unexpected software hangs

The figure below diagrammatically represents the working of the watchdog timer 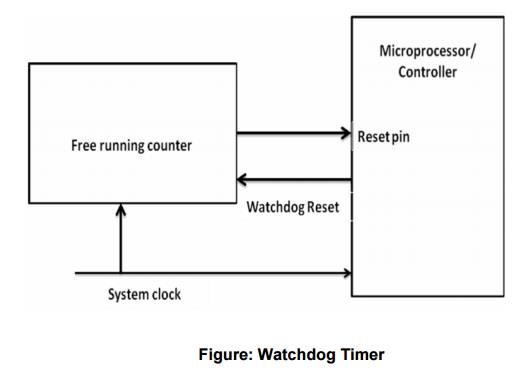