2. Memory Testing and its purpose

4. A strategy for memory testing

After reading this chapter you will be able to understand:

What is memory testing?

What are the common memory related problems?

The previous chapter dealt with the different types of memory. This chapter will focus on the concept of testing memory devices, its purpose and different methods available.

2 MEMORY TESTING AND ITS PURPOSE

The purpose of a memory test is to confirm that each storage location in a memory device is working.

Memory Testing is performed when prototype hardware is ready and the designer needs to verify that address and data lines are correctly wired and memory chips are working properly.

Basic idea implement in testing can be understood by this simple task:

Write some set of Data values to each Address in Memory and Read it back to verify.

Ex. If number ’50’ is stored at a particular Address it is expected to be there unless rewritten or erased.

If all values are verified by reading back then Memory device passes the test.

Only through careful selection of data values can make sure passing result to be meaningful.

It can be difficult to detect all memory problems with a simple test.

Many Embedded Systems include Memory Tests only to detect catastrophic memory failures which might not even notice memory chips removal.

Memory Problems rarely occur with the chip itself, but due to a variety of post production tests to check quality this possibility is ruled out.

Catastrophic Failure is a memory problem that occurs due to physical and electrical damage, it is uncommon and easily detectable.

These are usually caused by,

An error in design

An error in production of the board

Any damage after manufacture

Wires that connect the memory are:-

Two wiring problems are shown below

Connected to another wire on the board

- May be caused by a bit of solder splash

2. Not connected to anything 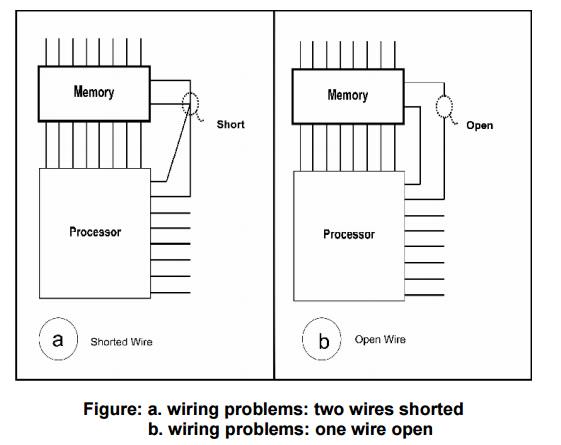 o i.e. memory device to see an address different from the one selected by the processor.

o  Problem is with a data line

When Control lines is shorted or open

o The operation of many control lines is specific to the processor or memory architecture.

o  the memory will probably not work at all.

o Unfortunately, because of the capacitive nature of unconnected electrical wires, some memory tests will not detect.

o   Because each read occurs immediately after the corresponding write, it is possible that the data read back represents nothing more than the voltage remaining on the data bus from the previous write.

If the data is read back too quickly, it will appear that the data has been correctly stored in memory-even though there is no memory chip at the other end of the bus!

To detect a missing memory chip the previous algorithm for test must be altered.

write the value 1 to the first location,

2 to the second location,

And 3 to the third location,

Then verify the data at the first location, the second location, etc. If the data values are unique (as they are in the test just described), the missing chip will be detected

Caused by pins on the memory chip

o System behaves same as though there is a wiring problem or a missing chip.

o  Detected by any test

4 A STRATEGY FOR MEMORY TESTING

For memory testing the strategy adopted should be effective and efficient. Ideally there should be multiple small tests instead of one large test.

It would be best to have three individual memory tests:

A device test: Checks to detect missing chips and catastrophic failures and problems with the control bus wiring

It is used to check data bus wiring.

Here we write all possible data values and verify that the memory device stores each one successfully.

In short to test the bus one bit at a time.

This test is used to independently test every bit.

A single data bit is set to 1 and “walked” through the entire data word.

If the data bus is working properly, the function will return 0.

Otherwise it will return the data value for which the test failed.

Because we are testing only the data bus at this point, all of the data values can be written to the same address. Any address within the memory device will do

In the Address Bus test we need to confirm that each of the address pins can be set to 0 and 1 without affecting any of the others.

The smallest set of address that will cover all possible combinations is the set of “power of two” addresses.

After writing one of the addresses, we must check none of the others has been overwritten.

The thing to test is that every bit in the device is capable of holding both 0 and 1.

For a thorough and complete device test every memory location has to be visited twice.

The second column represents the data that is written at the memory location indicated in column 1 in incremental fashion.

The third column represents the data of column 2 in inverted format. 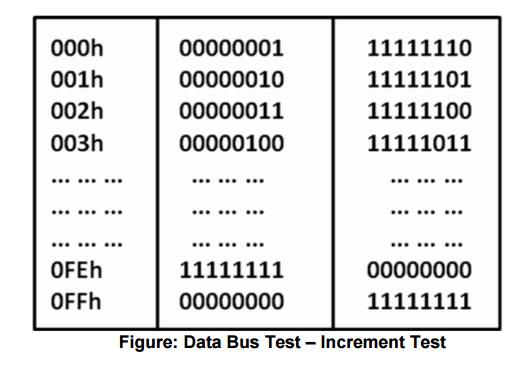