There are different types of memories available to be used in computers as well as embedded system.

This chapter guides the reader through the different types of memories that are available and can be used and tries to explain their differences in simple words.

There are three main types of memories, they are

It is read write memory.

Data at any memory location can be read or written.

It is volatile memory, i.e. retains the contents as long as electricity is supplied.

It is read only memory.

Data at any memory location can be only read.

It is non-volatile memory, i.e. the contents are retained even after electricity is switched off and available after it is switched on.

Data access to ROM is slow compared to RAM

It is combination of RAM as well as ROM

It has certain features of RAM and some of ROM

Like ROM the contents of hybrid memory are non volatile

The following figure gives a classification of different types of memory 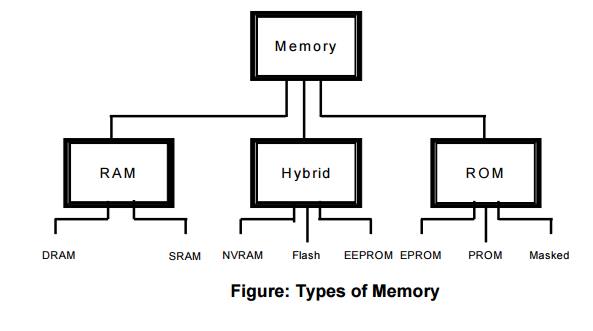   There are 2 important memory device in the RAM   family.

It retains the content as long as the power is applied to the chip.

If the power is turned off then its contents will be lost forever.

DRAM has extremely short Data lifetime(usually less than a quarter of second). This is true even when power is applied constantly.

A DRAM controller is used to make DRAM behave more like SRAM.

There are three types of ROM described as follows:

These are hardwired memory devices found on system.

It contains pre-programmed set of instruction and data and it cannot be modified or appended in any way. (it is just like an Audio CD that contains songs pre-written on

it and does not allow to write any other data)

The main advantage of masked ROM is low cost of production.

In the un-programmed state the data is entirely made up of 1’s.

PROMs are also known as one-time-programmable (OTP) device because any data can be written on it only once. If the data on the chip has some error and needs to be modified this memory chip has to be discarded and the modified data has to be written to another new PROM.

It is same as PROM and is programmed in same manner as a PROM.

It can be erased and reprogrammed repeatedly as the name suggests.

The erase operation in case of an EPROM is performed by exposing the chip to a source of ultraviolet light.

There are three types of Hybrid memory devices:

It is same as EPROM, but the erase operation is performed electrically.

Any byte in EEPROM can be erased and rewritten as desired

Flash memory is the most recent advancement in memory technology.

Flash memory devices are high density, low cost, nonvolatile, fast (to read, but not to write), and electrically reprogrammable.

Flash is much more popular than EEPROM and is rapidly displacing many of the ROM devices.

Flash devices can be erased only one sector at a time, not byte by byte.

NVRAM is usually just a SRAM with battery backup.

When power is turned on, the NVRAM operates just like any other SRAM but when power is off, the NVRAM draws enough electrical power from the battery to retain its content.

It is more expensive than SRAM.

DMA is a technique for transferring blocks of data directly between two hardware devices.

In the absence of DMA the processor must read the data from one device and write it to the other one byte or word at a time.

DMA Absence Disadvantage: If the amount of data to be transferred is large or frequency of transfer is high the rest of the software might never get a chance to run.

The Processor provides the DMA Controller with source and destination address & total number of bytes of the block of data which needs transfer.

After copying each byte each address is incremented & remaining bytes are reduced by one. 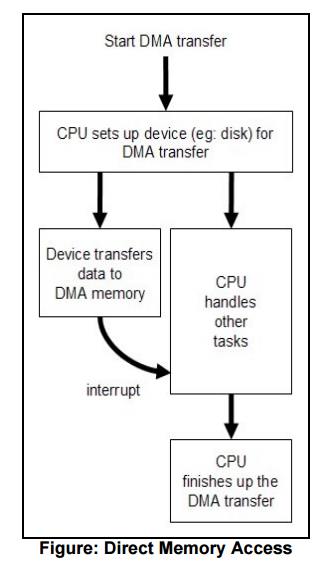